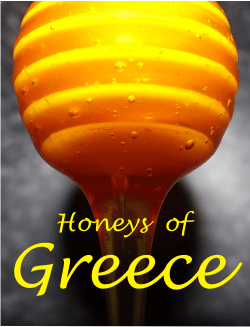 The golden liquid, ambrosia.
The old Gods must have known more than we do today about honey! Its cult was preserved by Greeks even till today. Here are the main Greek types of honey and why they are so special to us all.

Harsh times? Financial economic troubles? In Greece, honey is somewhere above all these. No other nation is as dedicated to beekeeping as this one. And here are the reasons for saying this:

• Greek language has more than 40 ancient names for honey containers. And innumerable references to honey throughout ancient Greek history. Greek mythology tells us that Zeus himself was raised on honey. (more Honey in history: Ancient Greece). Honeybees were so revered that they were even etched on Greek coins and used as currency.

• Greece produces 14,000-16,000 tons of honey per year. The exports are low (about 200 tons) – mainly due to inferior honeys (from Eastern Europe, Latin America, China etc) which are flooding Europe these days. Though owning a considerable smaller territory, Greece is on the 3rd place in honey production, after China and Turkey.

• Greeks consume a lot of honey, between 1.5-2 kilos a head annually – almost twice the European average! One of the highest, if not the highest, in the world. Honey is declared national product in Greece, with a distinct prestige, an excellent reputation and name.

• Greece has more bee hives per acre than any other country in Europe. Yet, production per hive is comparatively low due to the scattered concentrations of flora and the small scale of collecting areas.

• There are about 25,000 beekeepers in Greece today dispersed all over the country; about 1,500 of them make their living solely from the trade while about 85 percent use it to supplement their income and about 7,000 beekeepers own more than 150 hives.

What are the main Greek types of honey?

Established by law, there are eight basic categories of pure unadulterated Greek honey: pine honeydew, fir honeydew, chestnut blossom (honeydew and floral), heather, thyme, orange blossom and citrus, cotton and sunflower. The most abundant and organic honey remains that made of wild herbs and flowers. There are 6900 species and subspecies of plants, of which 1350 are endemic, found only in Greece.

Pine, fir, chestnut and heather are most famous for their taste, health benefits and the fact that they are organic. Orange, cotton and sunflower are not organic, because they come from large cultures and it is well known that systemics pesticides, especially Gaucho (imidacloprid), have been used in Greece for the past five or six years, especially on these 3 plants.

All Greek honeys owe their distinctiveness to organoleptic elements, which derive from the country’s natural flora, its tremendous variety of wild flowers, shrubs and trees. Due to geographical conditions, the taste of thyme is not found elsewhere, while pine and fir tree honey are also specific to Greece. Their variety of tastes, scents and hues set them apart from the honeys of other countries and make them typically Greek.

Strawberry tree honey – the healthiest honey in the world?

Made from the nectar of Arbutus menziesii blossom, it is considered to be the healthiest honey in the world, above manuka honey, sidr honey or tualang honey. It’s rare, as the flowers last for only a short time in autumn. And what is representative for it is that is almost the opposite of everything honey looks and tastes like. To quote Jon Whittle from islands.com, who traveled to Greece especially to find it, this honey is a “murky substance that comes out of the jar more like bacon fat than honey” and tastes “hideous. way beyond bitter.”

I have found a Greek store that sells it online, in combination with royal jelly (which boosts its health benefits). It is called Greek Food Tastes and they don’t say the taste is hideous. “Strawberry tree honey’s flavor contains notes of green ivy, coffee beans & bitter greens. In the beginning it tastes sweet but soon reveals the complicated, strong & bitter tastes that ends up in a soft aftertaste. Its color is dark amber when fresh & light dark when crystallized.” – I am so intrigued by all this description that I think I’ll end up ordering a jar…
It is called Nº2 SuperBee. See here.

In Greece honey is given at parties as a symbol of fertility and prosperity.

I’m sure you’ve heard the story of the Greek who was living in New York, got lung cancer, with only 9 more months to live, came back to Greece to die in peace and end up living other 36 years after that!
He came back to his home island, Ikaria, which belongs to the 5 “Blue Zones” in the world for longevity.

The Festival of Greek Honey and Bee Products, which takes place in Neo Faliro at Peace and Friendship Stadium (what a beautiful name!) is organized every 2 years and lasts for 3 days. The biggest event of this kind in Greece, a good opportunity for beekeepers and honey lovers to meet. The show includes from honey-inspired food to presentations of various types of honey and their health benefits and demonstrations of beekeeping. Here are some wonderful pictures, courtesy of xinhuanet.com and greekhoneyfestival.com: From where to buy good Greek honey?

The first answer is, of course, from Greece! Go there for an amazing experience and complete it with the taste of real Greek honey. Not necessary that you will be supporting their tourism and local beekeepers in their work, but that you, personally, will experience the true taste of Greece only there, after you have tasted a traditional food in the shade of a taverna and listened to some of their amazing bouzouki songs. Then, here you are, taste some Greek honey and lick all your fingers!

But if you cannot spend a little vacation there, you can find it in online shops. And of course, on Amazon. Here are some examples:

And here is my recommendations for a sweet Christmas gift:
Pine honey – a taste never to forget! It’s gift-wrap available on Amazon.

Yet, beekeeping is not easy in Greece!

A beekeeper has a nomadic life. He has to move this hives 4 to 6 times a year following the nectar or honeydew flow. And the harvests are poor, 12-15 kilos on average, nothing near the 30-40 kilos in the other European countries.

His annual route may involve driving his van over 30,000 km, as he must change the location of his hives frequently to catch blossoms at the right time. For example, a beekeeper from Central Greece will set out in spring for the orange groves of Argos or Arta, then in June he will take his hives up the mountains in Arcadia or Epirus. In July he will go down to the plains of Thessaly for the cotton, ending in the autumn in Evia or the Halkidiki peninsula (which gives about 30% of all Greek honey) to harvest honeydew from the pine forests. Finally, before winter comes, he will move as far south as possible, perhaps to Messenia or Lakonia, where the winters are milder and sunnier.

Is there CCD (Colony Collapse Disorder) in Greece?

While it is generally accepted that neonics are slowly killing bees, some beekeepers believe that the main issue is overall abuse and mismanagement. The country is still void of genetically modified foods, and the main problem is considered to be overworking the bees and treating them as a commodity accounts for the problem. Read more on What causes CCD? Do pesticides kill bees? Or radiations? Pathogens? Aliens? 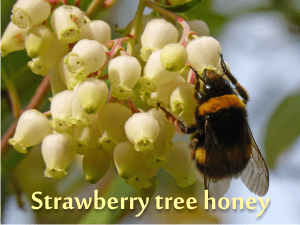 What is strawberry tree honey?

3 thoughts on “Greek types of honey and why they are so special!”