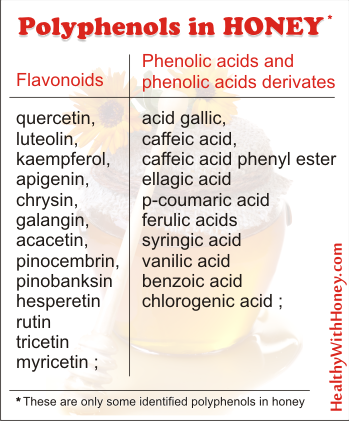 Honey contains lots of healthy compounds, polyphenols included, highly beneficial to our bodies. We’ve heard this a lot: honey is good, it has antioxidants, vitamins, enzymes… “It’s a natural antibiotic” – all honey sellers will tell you that, even if they don’t even know what these are.

In the end, we don’t really need to know what’s inside honey (in fact scientists haven’t even discovered yet all its compounds ) as long as it does its job, right? Do we need to know how our body works, for it to work properly? No, we don’t.

It is true that sometimes we need to fix some of its irregularities, when they happen, and for this it is a good thing to know how a body works so that we know what needs to be fixed. Which is the main reason we are interested in the composition of honey, to know when and for what to use it.

Its composition depends a lot on the type of honey. Honeydew honey has a different composition than floral honeys, and floral honeys are different according to the type of flower used. And then there is manula honey, which differentiates itself due to a higher content of methylglyoxal (MGO) and DHA (the substance found in the manuka flower’s nectar which will turn into MGO in honey, in time).

Polyphenols are substances found in fruits, vegetables, tea, olive oil etc. They are one of the most important groups of compounds occurring in plants, in which they are widely distributed. (Also products of the secondary metabolism of plants). They are associated with many heath benefits, hence the great interest lately shown in them.
Polyphenols contain flavonoids and phenolic acids.

In honey, polyphenols are an important group of compounds with respect to appearance and functional properties,  also used to determine the floral source of a honey.
For example:

– Hesperetin has been used as a marker for citrus honey
– Kaempferol for rosemary honey
– Quercetin for sunﬂower honey.
– Ellagic acid in heather honey
– Hydroxycinnamates (caffeic, p-coumaric and ferulic acids) in chestnut honey.

Flavonoids have been studied for about 50 years and the cellular mechanisms involved in their biological actions are still not completely known. (according to Depeint et al., 2002)

Polyphenols are not the same in all honeys. While some of them are common to all types of honey, some are specific to certain monofloral honeys.

(See in the picture the phenolic composition of some types of honey, studied by Krystyna Pyrzynska and published in the study “Analysis of phenolic acids and flavonoids in honey” in Trends in Analytical Chemistry, Vol. 28, No. 7, 2009, published online by Research Gate.)

The polyphenols found in honey are:

Depending on the honey type, total polyphenols can be found in smaller or bigger quantities, from 56 mg/kg to 500 mg/kg. As a rule, the darker the honey, the higher the polyphenol content, the bigger the antioxidant properties.
Flavonoid content can vary between 2 and 46 mg/kg of honey and was higher in samples produced during dry season with high temperatures.²

The content of polyphenolic compounds (ﬂavonoids and phenolic acids) in honey is strongly influenced by the ﬂoral and geographical origin as well as by climate characteristic of the site. Altitude is also an important factor. For example Nepalese honeys have been tested for their antioxidant compounds and total phenolic content.
Total phenolic content ranged from 154.87 to 41.90 mg gallic acid equivalent (GAE/100 g) showing that the Nepalese honey collected from high altitude region contained more antioxidants than honey of low altitude region.

What are the health benefits of polyphenols?

• The polyphenols are responsible for the antioxidant properties of honey.

Flavonoids behave as antioxidants in a variety of ways, including:
– direct trapping of reactive oxygen species (ROS),
– inhibition of enzymes responsible for producing superoxide anions,
– chelation of transition metals involved in processes forming radicals and
– prevention of the peroxidation process by reducing alkoxyl and peroxyl radicals.

Benavente-García et al. showed in 1997 that flavonoids are potent radical scavengers and, thus able to reduce many aging and degenerative events including reactive oxygen species.

• Decrease the risk of coronary heart disease and cardiovascular diseases:

Flavonoids decrease the risk of coronary heart disease by three major actions:
– improving coronary vasodilatation,
– decreasing the ability of platelets in the blood to clot, and
– preventing low-density lipoproteins (LDLs) from oxidizing.
(according to García and Castillo, 2008)

Some of the polyphenols like quercetin, acacetin, caffeic acid phenethyl ester (CAPE), kaempferol, and galangin present in honey have been reported as promising pharmaceutical drugs in the treatment of cardiovascular diseases. Many of the pharmacological properties of flavonoids can be linked to the abilities of these compounds to inhibit enzymes involved in cell activation. In vitro experiments demonstrated the capacity of flavonoids to modify the activity of enzymatic systems in mammals (kinases, phospholipases, ATPase, lipooxygenases, cyclooxygenases, phosphodiesterases etc.).

Middleton et al., said in 2000 that many epidemiological studies have shown that regular flavonoid intake is associated with a reduced risk of cardiovascular diseases.

Jendekova et al., showed in a  2006 study that in the coronary heart disease, the protective effects of flavonoids include mainly antithrombotic, antiischemic, anti-oxidant, and vasorelaxant.

Polyphenols are considered to be promising agents in the treatment of cancer according to the research reported by Jaganathan and Mandal in 2009.

Antibacterial activity was tested against Escherichia coli and Paenibacillus larvae, the first a model organism for bacteria and other a pathogenic bacterium causing American foul brood disease in Apis mellifera.

The most effective in antibacterial activity for P.larvae was found in sunflower honey
whereas multifloral honey showed highest activity against E.coli.

Yet, polyphenol bioavailability is dependent upon many variables including gut absorption, glucuronide excretion to the intestinal lumen, microbiota metabolism, liver and gut metabolism, plasma kinetics, a variety of metabolites in the bloodstream, bonding to albumin, cell assimilation and metabolism, accumulation in tissues and bile, and urinary excretion.

Zika virus (ZIKV) is a mosquito-borne virus taht created an explosive epidemic between 2014-2016. The infection has also been associated with severe neurological disorders like Guillain-Barré syndrome and microcephaly in fetuses. There is currently no approved antiviral against ZIKV.

A study from 2019 conducted by Lee JL and team on a library of 483 flavonoid derivatives was meant to identify potential anti-ZIKV compounds. From all of them, pinocembrin, a flavanoid found in honey, tea and red wine, was chosen for downstream studies as it exhibited the strongest inhibition of ZIKV infection in human placental JEG-3 cells.

According to the study, pinocembrin acts on post-entry process(es) of the ZIKV replication cycle and also inhibits viral RNA production and envelope protein synthesis based on quantitative reverse transcription-PCR (qRT-PCR) and Western blot analyses. This study has demonstrated for the first time the in vitro anti-ZIKV activity of pinocembrin.

Do we need our honey to be raw to still have the polyphenols in it?

Yes. Regular honey found in our supermarkets has to go through standard processing methods, like ultrasonic extraction (USE) and microwave-assisted extraction (MAE). Only Phenolic acids and glycosides such as quercetrin, rutin and hesperidin appeared to be stable under such conditions. (See the study “Stability of bioactive polyphenols from honey during different extraction methods” made in 2013 by Magdalena Biesaga et al., from the University of Warsaw Department of Chemistry, Warsaw, Poland)

See: What is processed honey?;
What is the difference between pure honey and raw honey?

• In his study “Honey Proteins and their Interaction with Polyphenols”, published in 2010, MSc thesis, Brock University St. Catharines, Ontario and Alvarez L M showed that the reduction of proteins during honey storage was caused, partially, by the protein complexation with phenolics.

Honey melanoidins are multi-component polymers consisting of protein–polyphenol–oligosaccharide complexes. On another hand, a direct interaction between polyphenols and melanoidins resulted in a loss or gain of function for melanoidin antioxidant activity.
Depending on the initial concentration of melanoidins in unheated honeys, heat treatment either caused an accelerated formation of high molecular weight melanoidins and an increase in the radical scavenging activity (light and medium honeys) or the degradation of melanoidins and the reduction in radical scavenging activity (dark honeys).
Thess studies led to a view of honey melanoidins as high molecular weight multi-component macromolecules possessing antioxidant activity (see the studies of Katrina Brudzynski in March 2011 and August 2011).

We can use honey for everything. In fact, it is recommended to use only honey for our daily need of sugars. Which is indeed a very difficult task, as sugar is inserted in everything in our markets, from milk to meat. But we can replace the sugar in our home made cakes, in our coffee, teas, use it instead of jam and in so many other ways.

And yes, we can use it in our cooking as well. Of course it is recommended to be eaten raw, which means unheated, but it doesn’t matter if besides raw honey we also eat heated honey in our cooking.

Some say that when honey is heated it becomes poisoned. Not true. A certain substance from it, methylglyoxal (which, alone, is indeed toxic) will probably double its quantity, but this is still insignificant compared to the quantity of MGO found in manuka honey.
Some others say it will lose its vitamins and enzymes. It’s true, everything changes. But some enzymes will increase, while others will decrease. Here are some things that happen in the process of heating: What is the difference between pure honey and raw honey?

My point here is that honey is the perfect sweetener, which can be also be used heated – we will not be poisoning ourselves. And of course, we should also eat it raw, because its power relies not only on its initial composition but also on the synergy of its elements. Honey work just like the whole hive works. Taken apart, none of the bees will be able to produce honey. Together they can do it. It’s the same with honey: the enzymes alone, the antioxidants alone are useless. But combined in specific amounts they do miracles. 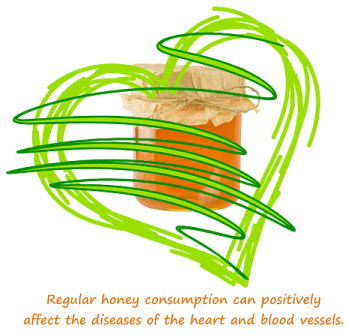 What is saffron honey? One tasty honey good for sex life and so much more! 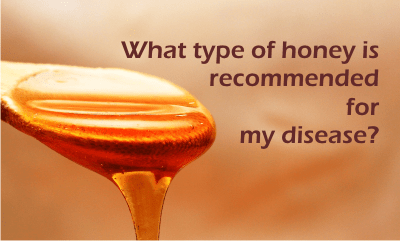