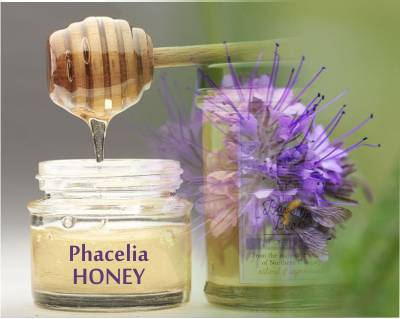 Phacelia tanacetifolia is simply a weed – people would say! What kind of honey can come out from a weed? Some even say this honey has no health benefits. At all.
We dare to say they are wrong.

In Europe beekeepers know this plant very well. They brought it here and even made entire crops, because in some years, like it was in this 2016, due to unfavorable weather conditions, acacia had a very poor production. And they managed to save the spring honey production with phacelia. Plant’s characteristics:
– is a herbaceous, non-leguminous, flowering annual in the Hydrophyllaceae family;
– grows erect to a maximum height near 100 centimeters;
– the wild form is glandular and coated in stiff hairs;
– the foliage appears ferny;
– the flowers are in flat-topped clusters in shades of purple or occasionally white. Each flower is just under a centimeter long and has protruding whiskery stamens;
– The flowers that are planted in spring or summer flowers approximately 6 – 8 weeks after germination. Flowering continues for 6 to 8 weeks. Phacelia is a long-day plant and requires a minimum of 13 hours of daylight to initiate flowering (roughly mid-April to early September in the mid-Atlantic);
– it is comparable to buckwheat (see Buckwheat honey) in many ways. Cultural differences are that buckwheat germinates more readily, especially at higher soil temperatures, and phacelia is more tolerant of cold and drought.
– it needs a “sweet” soil plant, meaning that it needs alkaline soils to grow well;
– it is used both as a cover crop and as bee forage;
– it does a good job of limiting nitrate leaching when planted in early fall. Research in other regions shows phacelia has the potential to produce abundant biomass and does a good job at catching excess nitrates before they leach into groundwater;
– in cooler regions, it can be used as a between cash crops cover crop in the summer;
– it’s also useful as a cut flower with its unusual and attractive blooms, strong stems, and long vaselife. Because phacelia germinates well at cool temperatures and grows quickly, cut flowers can be available by mid-spring;
– phacelia seed needs dark for good germination and should be buried at 1/4 inch. It requires cool soil temperatures for germination (although it will grow well in hot, dry soil). Research reports indicate the optimum soil temperature for germination is between 37 – 68°F (soil temperatures closely follow air temperatures). Of course, wet or compacted soils will reduce germination success. Planting phacelia before a rain or lightly irrigating after planting may improve germination rates;
– it may be suitable as a winter-killed cover crop when a heavy crop residue is not needed in the spring.

Why is phacelia so good for honey crops and bees?

Phacelia is listed as one of the top 20 honey-producing flowers for honeybees. Because:

· It has a great habit of flowering abundantly and for a long period. This increases beneficial insect numbers and diversity. It’s highly attractive to honey bees, bumblebees, and syrphid flies, and these insects are valuable pollinators. But it also attracts other beneficial insects, such as parasitic wasps and minute pirate bugs.

· It provides high quantities of nectar, being the second plant after the acacia which gives most nectar. A single flower can give up to 4.5 mg of nectar, with a sugar concentration of 28% (Cirnu 1973). 10,000 m² can produce between 300 and 1000 kg of phacelia honey.

·  It is a sweet and complete flower for the honey bees because it provides both pollen (for protein – needed for egg production) and nectar (for carbohydrates – needed for energy). For humans it is highly important as it provides us with honey in times when other flowers cannot resist the bad weather conditions.

On beesource.com, a thread by thread by Summer1052 says:

“Last year, I planted a wildflower mix that included purple tansy. It was covered with bees. And, it survived the worst drought in Texas’ recorded history and bloomed for almost 3 months without water, and in our ungodly hot summer!

How is Phacelia honey?

Color: from light beige to white, translucent glassy;
Aroma: mild and delicate with a fine pleasant flavor;
Taste: nice soft lemony scent and taste;
Crystallization: slowly, into fine crystals making the honey finely creamy, because its fructose contain is higher than that of glucose. (like acacia honey.)

Because phacelia is a very common plant in North America, it is considered to be Winnie the Pooh’s favorite honey! Here is one of the best phacelia honey, from the majestic mountains of Northern Hungary.
Picture source travellingbee.co.uk

To combat the idea that phacelia honey has no health benefits, we have to remember that it is honey, first of all. Which means it is made by bees, with added enzymes. Any nectar coming from any flower, combined with bees’ enzymes turns into valuable honey for our health.
Secondly, the nectar of the plant is valuable because the plant is used a lot as essence, alone or in combination.

Diana Mossop says on her website: “Phacelia is one of a wide range of carefully researched essences that we use when producing the Phytobiophysics formulas.”

– can be very helpful for the treatment of sinus problems and headaches as well as drug addiction
– can be used by people lacking in confidence, for people who feel that they need to constantly seek the approval of others.
– it offers emotional support when a person is easily exploited.
– it can be helpful for the left eye, ear and nose, additionally left sided headaches and sinusitis.
– it is valuable for the treatment of the virus Condyloma (warts) and for herpes simplex (cold sores).
– it is found in the combination of 5 different flowers of Flower Formula 6 – Phacelia ‘Clear Senses’

• Like any other type of honey, of whatever the plant, the phacelia honey has disinfectant and skin care effect, also helping in treating burns.

According to folk medicine, phacelia honey:

• is a very good diuretic, helping to eliminate excess water from tissues;

• has an estrogenic action, helping in fixing calcium in the bones, while in women favors the emphasizing of feminine features and has strong rejuvenating effect.

• Like any other honey, it has the following effects:
– anti-inflammatory,
– antimicrobial,
– anti-allergic,
– expectorant,
– sedative,
– antispasmodic,
– enhances diuresis and eliminates toxins,
– increases body’s defense capacity,
– has a favorable action on the heart muscle and coronary circulation,
– nourishes and strengthens the nerve cells,
– improves sleep,
– strengthens and regulates the endocrine system
– combats constipation and putrid phenomena in the intestines,
– raises the liver glycogen reserves increase
– facilitates the digestion of proteins and fats.

Care to try some?

Why is phacelia pollen purple?

Generally the pollen is bright yellow. But oftentimes it can be from white to orange, and green to brown and red, even bright blue, fuchsia, and in this case, purple.

Scientists say that the traditional yellow pollen comes from flavonoids, the chemicals found in abundance in citrus. There hasn’t been researched on what makes phacelia pollen purple, but according to Lila Higgins on nhm.org, responsible for this can be another colorful compound, anthocyanin which is also present in blueberries and raspberries.

For beekeepers only:
According to a study Introducing plants for bee-keeping at any cost? — Assessment of Phacelia tanacetifolia as nectar source plant under xeric Mediterranean conditions, by P. Petanidou from the University of Aegean, Greece, published in 2003, these flowers behave differently in Mediterranean conditions.
“The flowering occurred during the major flowering season unless intensely irrigated, whereas duration and flower life span were shorter compared to continental conditions. Mediterranean climate limitations to nectar secretion were assessed on plants grown under natural conditions (xeric) vs. regular irrigation. May flowering xeric plants produced less nectar per flower than the irrigated ones, but had the same nectar potential per surface area. On the contrary, at the cost of intense irrigation, July flowering plants produced much higher nectar per flower and per surface area compared to xeric ones. In all flowering periods and sections honeybees were the most constant and numerous visitors, visiting the flowers mainly for nectar, whereas solitary bees were scarce. Based on our results, we suggest that although the plant may be a good nectar source for honeybees in some cases, we have serious reservations for a generalized use in the Mediterranean.”

Be careful to the specific time in the year, when you plant phacelia. Their time of blooming should not coincide with the other time of blooming of the plants you want your bees go to.
If these flowers bloom in the same time, for example acacia and phacelia, bees will chose phacelia over acacia, as is is more attractive to them.

3 thoughts on “Phacelia honey – good for our health and yummy for the bees!”