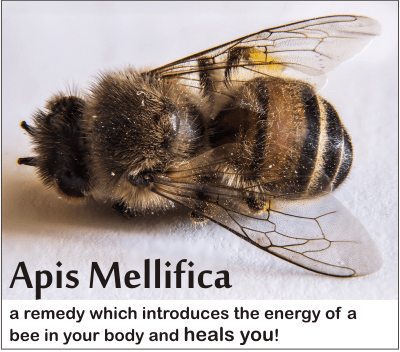 If you are looking for a natural treatment for swelling, stinging pain, redness, hives, carbuncles or sore throat and manifest a desire for cold things, then you should consider a drug made from the entire body of a bee.

Apis mellifica is a homeopathic remedy made from bees not honey, as some people might have thought. Folk medicine uses dead bees, modern homeopathic medicine kills the bees in alcohol and then dilutes the solution so many times that, from the chemistry point of view, it is difficult to find any molecules of the original substance in the remedy.

So in the first case we are literary eating dead bees, in a homeopathic remedy from bees, we are only eating the idea and the energy of the bee (sort of saying…).
And because we humans, are not only physical matter, the idea-remedy does work.

I was talking in my previous post about how we can eat dead bees to treat specific diseases and enhance our health. It sounded intriguing and morbid somehow, though this was a technique probably used since the very invention of beekeeping.

But the truth is we do eat bees in other pharmaceutical drugs, used in homeopathy, called Apis Mellifica. It’s a common thing to often take a medicine without knowing what it was made of. Most of these times it’s for the best. Ignorance could be a bless in many cases.

Apis Mellifica is a modern remedy which started from a traditional one prescribed by a native Indian medicine woman treated a man with severely edematous kidneys with dried and powdered honeybees.
Following the cure of this patient, Dr. Marcy, a New York physician, introduced this remedy into homeopathy in 1847. Apis Mellifica is now one of homeopathy’s most commonly used remedies, treating diseases as diverse as endometriosis and scarlet fever, or whatever match the specific symptoms.

What is Apis mellifica?

Apis Mellifica is a homeopathic remedy which was first made by pouring half an ounce of alcohol on five living bees, and shaking them during the eight days, three times a day, with one hundred vigorous strokes of the arm.

This preparation was used as the mother-tincture, obtaining attenuations up to the thirties centesimal scale. The best results were obtained with either the third or the thirtieth potency. It is recommended for bee stings and every other disease that gives similar symptoms in humans, such as: eye infections (conjunctivitis and styes), sore throats, hives, stings from insects, urinary tract infections.

The American homeopath, Joette Calabrese, tell us the story of her aunt, who had been prone to styes in her twenties, had an acute episode in her 70s.
(A stye, aka hordeolum is a small, painful lump on the inside or outside of the eyelid. It is actually an abscess filled with pus and is usually caused by a its main IIindicationstaphylococcus bacteria eye infection.)

Her doctor gave her an antibiotic that worked. It brought down the swelling and pain in short order. The story repeated for the second one and the third one. It seemed like a never-ending story. When the forth lump appeared she decided to call her niece. She recommended Apis30C. Two days later, there was still some puffiness and sensitivity, but the worst was past. And the problem never returned for the following 10 years.

When is Apis Mellifica indicated?

It’s main indications relate to allergies and swelling from insects bites, bees or not. But its benefits exceed this area a lot. As a rule, for common use (not requiring a doctor’s prescription) it can be given in any situations which include stinging pain, swelling and warmth intolerance.

The Apis sufferer cannot tolerate warmth from the sun or a warm room.

Here are some easy cases:
– sore throats. Especially when swollen tonsils are observed, when warm drinks cause pain or are unpleasant. Cold drinks are most wanted and also cold applications on the area ease the pain

Despite the water-filled appearance of Apis, the sufferer is not thirsty. This contradiction is useful when a differential between two homeopathic remedies is perplexing.

– Sensitive skin where hives have erupted also indicates the need for Apis. The physical symptoms are sometimes accompanied by weepy sadness and irritability.

Here is the case of a 27 yo woman, Beth, suffering from urticaria and angiodeoma (swelling of the lips, face and tongue). She worked in a bank and had suffered this problem since 1999, shortly after getting a puppy. She had thought the dog was to blame but when he died a few months later her condition did not improve. She had recurring rashes over the next seven months and then her face, lips, tongue and the glands in her throat began to swell regularly. Some days she was afraid to leave the house because of the extreme swelling. Shortly after, her grandmother died and her symptoms got worse.

First she was given anti-histamines and then steroids. She had referrals to an allergy specialist, a dermatologist, nutritionist and a rheumatologist with no result. Her rash was extremely itchy, appearing as raised sore, red lumps which were on her hands, arms legs, trunk and soles of the feet. The condition appeared to be worsening with increased swelling and inflammation of her wrists, hands and knees.

After trying to understand the patterns of her life, dr Moira McGuigan found similarities between her life and that of a worker honey bee. She gave her first 3 tablets of Apis 30, and then another 3. Her skin is not clean and she is off anti-histamins, with a life completely changed on all levels: physical, social and emotional. (Read her entire story on britishhomeopathic.org).

– A fright, “stinging” jealousy, anger or disappointment often cause a need for Apis, even if these cases are at an emotional level.

– Any type of stinging swelling with heat on the skin, in the throat, in the urinary tract or in the eye, consider taking Apis Mellifica and go to talk to a homeopath. Or follow the dosage indicated on the label: Adult and children 2 years of age and older: Dissolve 5 pellets under the tongue 3 times a day until relieved or as directed by a doctor.

“The bee helps to heal all thy internal and external maladies, and is the best little friend whom man possesses in this world.”—More in Cotton’s Book of the Bee, p. 138.

In the early stages of today’s conventional medicine, Apis was used with success for many serious diseases, for which there were no other viable solutions. In his book “Apis Mellifica or, The Poison of the Honey-Bee, Considered as a Therapeutic Agent”, written in 1858 and published in 2008 by gutenberg.org, the author C. W. Wolf describes the good results he had in treating even complex and life-threatening diseases using this remedy. Among them:

· bad cases of ophthalmia (inflammation of the eye)

· inflammation of the tongue, mouth, and throat.

· scarlatina, rubella, measles, urticaria and pemphigus (a rare skin disorders that cause blisters and sores on the skin or mucous membranes, such as in the mouth or on the genitals.)

· furuncles and carbuncles (a boil, a painful infection that forms around a hair follicle and contains pus)

· panaritia (acute purulent inflammation of a digit, most often a finger, which may be superficial, affecting cutaneous or subcutaneous tissue or tissue beneath the nail, and also deep, affecting tendons, bones, or joints)

· white swelling of the knee

· dysentery (a type of gastroenteritis that results in diarrhea with blood, fever, abdominal pain, and a feeling of incomplete defecation. It is caused by several types of infections such as bacteria, viruses, parasitic worms, or protozoa.)

· diseases of respiratory system (Hoarseness and difficulty of breathing, roughness and sensitiveness in the larynx, rough cough during evening; heat; difficult breathing, every drop of liquid almost suffocates him and others)

Apis Mell 30X available on Amazon. Read the amazing reviews people read an see how they used it!

A natural treatment for swelling, hives, urticaria and sore throats was last modified: June 22nd, 2019 by Laura
Laura 05/19/2018
The therapy with DEAD BEES offers interesting health benefits! Drinking water which was placed on a beehive has many heath benefits!