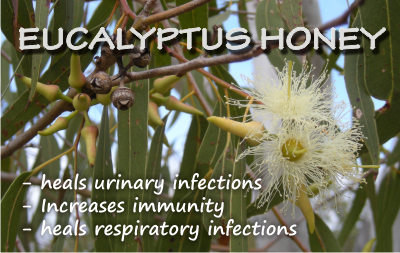 EUCALYPTUS honey is usually a honey harvested from Eucalyptus globulus, probably the most well-known evergreen tree from all Eucalyptus species.

Many Eucalyptus species were introduced from Australia at the beginning of the twentieth century and are found in the Mediterranean countries of Europe, cultivated mainly along the coasts (the tree has a good resistance to the coastal climate), for the paper industry, for the essential oil and as ornamental species.
All species are very attractive to bees that gather from them both nectar and pollen.

Botanical name of the plant: Eucalyptus globulus
Place of harvest: it is native to Australia, but it was introduced to other parts of the world including India, Europe and South Africa a few centuries ago.

Genus: The tree belongs to a wide genus of flowering trees and shrubs (including a distinct group with a multiple-stem mallee growth habit) in the myrtle family, Myrtaceae. From of all of them, Eucalyptus globulus gives us the best eucalyptus honey.

Also known as Tasmanian blue gum, fever tree, southern blue gum or blue gum. It is an evergreen tree, one of the most widely cultivated trees native to Australia. They can grow up to 55 m (98–180 ft) tall, but in Tasmania there is one of 90.7 m (298 ft).
Eucalyptus was borrowed with its name, too. You will recognize it, no matter the language. E.g.: in French: Eucalyptus, in Italian: Eucalipto, in German: Eukalyptus, in Spanish: Eucalipto, in Finnish: Eukalyptus.

There are types of honey that are very similar all over the world, like linden or black locust (Acacia, Robinia pseudocacia). And there are other types, like eucalyptus, thyme and orange blossom, that can vary considerably in taste and color, depending on the plant and country of origin.
Their appreciation also depends on the country. Honeydew honey like fir and pine honey are especially appreciated in different parts of Europe, but less appreciated in other parts. Eucalyptus is not a very common European honey, but honey production is important in Italy, Spain and Portugal. It is very much loved by Australians, New Zealands or Americans.

Color: normal honey color with a dull tone (greyish), with a medium to dark intensity.

Crystallization: it has a rapid to medium speed, with fine to medium crystals.

Mineral content: very low. There were studies made that checked the level of selenium in couple of honey samples: among them, Eucalyptus spp., L stoechas and Citrus spp. had the lowest values (according to COSTA-SILVA, F et al., in the 2011 study: “Selenium content of Portuguese unifloral honeys. Journal of Food Composition and Analysis” 24 (3):351-355.)

Enzymes content:  A high content of diastase (24), being only surpassed by buckwheat (36.8) – yet this is not a parameter indicating the quality of honey. Diastase is that puzzling enzyme found in honey. It is found in nectar of the flowers and it is also added by the honey bee during the collection and ripening of nectar. Its role is to digests starch to simpler compounds. But the funny thing is that there is no starch in nectar. So, what its function in honey is not yet clear to our scientists.

Antibacterial potency:  medium.
Eucalyptus honey has an intermediate antibacterial activity, much like clover, lavender, linden, rape, rhododendron, rosemary, thyme, tupello.  Its activity is considered to be both peroxide and non peroxide activity. A study made of Eucalyptus globulus pollen, though very rich in quercetin derivates, did not show any antibacterial activity (according to Campos et al., 1998). The study was comparing it with Ranunculus sardous and Ulex Europeans (with different flavonoids from them), against Pseudomonas aeruginosa. These two had a marked antibiotic activity.

Studies showed that Rhododendron and multifloral honeys have more inhibitory effect than eucalyptus and orange honeys. (According to KOC, A N et al., in the 2009 study “Antifungal Activity of Turkish Honey against Candida spp. and Trichosporon spp: an in vitro
evaluation.”).
They evaluated honey samples from different floral sources, for their ability to inhibit the growth of 40 yeast strains (Candida albicans, C. krusei, C. glabrata and Trichosoporon spp.).

It’s blossom honey. But first we need to know which honey is considered to be blossom honey and which honeydew honey. If we think of eucalyptus, honey bees can collect nectar and pollen, but also honeydew from its bark. And they do that, of course.
To determine the variation of the honey chemical parameters, a precise distinction between honeydew and blossom honeys can only be carried out in specialized laboratories by chemical, microscopic and sensory analysis of honey.

The electrical conductivity of mixed blossom-honeydew honeys lies between 0.5 and 0.8 mS/cm, while the values of
pure blossom honeys are below 0.5 mS/cm (according to Talpay, 1985 and Bogdanov et al., 1999). BUT, there are exceptions, and among them, our eucalyptus honey. Chestnut, arbutus, erica, eucalyptus, linden honeys and several others, are regarded as blossom honeys, but have often electrical conductivity values above 0.8 mS/cm (Persano Oddo and Piro, 2004; European Commission, 2002).

• pH value or the sum of the glucose and fructose content (G+F). These parameters are also used to differentiate between blossom and honeydew honey (according to Bogdanov et al., 1987). According to the present EU honey standard, the G+F minimum value for blossom honeys should be 60 g/100g , while for honeydew honeys it is 45 g/100 g (European Commission, 2002).

• Other parameters, which are not commonly determined in a routine honey control, such as melezitose, various oligosaccharides or amino acids have also been used. (Bogdanov et al., 1987; Persano Oddo and Piro, 2004)

In 2012 it was published a clinical trial which proved the favorable effects of honey on cough and sleep of children. Initially it was used buckwheat honey, due to its high antioxidant properties. But the results were confirmed by other 3 honeys: eucalyptus, citrus and labiatae.

They used small doses of honey: ½ tsp for 2-5 year olds, 1 teaspoon for the 6 to 11 year-olds and 2 tsp for 12 to 18 year-olds, all with with upper respiratory tract infections. The same study shows that honey is more effective than a chemical anti cough syrup. (according to COHEN, H A et al. in a 2012 study: “Effect of honey on nocturnal cough and sleep quality: A doubleblind, randomized, placebo-controlled study.” Pediatrics: 1-8).

For Persistent Post-Infectious Cough in adults,
you can always resort to an old remedy with spectacular results: honey and coffee.

Like any honey, Eucalyptus honey is used for healing wounds, ulcers, burns, cuts, abrasions and sores. It is also effective on insect bites and stings. It is also used to relieve stiff muscles and joint pains, using it for massage, in circular motions.

The same activity was shown to be in bee pollen from apple and willow.

According to CURATIVE MELLIFEROUS PLANTS IN TURKEY an article by Orhan KOSI, in Turkey EUCALYPTUS (Eucalyptus globulus) is considered to have the following health benefits, and transfers them into honey as well.

It is good for respiratory diseases, it stops cough (has expectorant effect), heals throat inflammations and nasal inflammations.
It cleanses the urinary tract.
It is used as an antiseptic on the skin (good for ulcers and wounds), it prevents the formation of acne and dandruff.
It is refreshing and strengthens the immune system.
It is beneficial for the rheumatic pains and nerve inflammations.
It is good for muscle stiffness.
It relieves migraine pains.

The eucalyptus essential oil is obtained from fresh leaves, branch tips, and dried leaves. It can be found found in over the counter drugs including rubs, inhalers, liniments, rash creams, and mouthwashes. One of the most important supplier of this oil is Australia, the native country of the eucalyptus, yet China is the largest commercial producer.

Eucalyptus essential oil is a volatile oil and its primary active constituent is eucalyptol (identified by Cloez, in 1870), now more often called cineole. It is used for temporary relief of minor aches and pains of muscles and for temporary relief of nasal congestion and coughs associated with a cold.
It acts on receptors in the nasal mucose (like menthol) and thus alleviate nasal congestion.

Added in baths, spas and saunas it provides a cooling and refreshing effect. Eucalyptus oil stimulates and is effective in removing exhaustion and mental sluggishness and rejuvenates those who are suffering from stress and mental disorders.

It can also be added in  skin care products, soaps, detergents and household cleaners, and is used as a prime ingredient in many mouthwashes and toothpastes. It is very effective against cavities, dental plaques, gingivitis and other dental infections due to its germicidal and antiseptic properties.

Due to its antiseptic and deodorant nature, the eucalyptus oil makes is perfect as a room freshener for hospitals and sickbed atmosphere. It kills bacteria and germs in the air and keeps the room environment clean.

It seems that the Australian aborigines extract valuable water from its roots and use its leaves to relieve fevers.

To be an efficient expectorant and antiseptic, the volatile oil has to contain at least 70% eucalyptol. Yet, if taken in large quantities, eucalyptus oil is toxic, and there are life-threatening poisonings that have been reported from overdoses of eucalyptus oil. Symptoms of overdose or toxicity include: nausea, vomiting, and diarrhea, central nervous system depression, a drop in blood pressure, circulation problems, collapse, and coma. one should take care while using eucalyptus oil.

Only a few drops of Eucalyptus oil are enough to cause life-threatening poisoning in some children. Eucalyptus supplementation is not advisable for children, older or chronically ill people, pregnant women or breastfeeding women. Also, insulin-dependent diabetics should carefully monitor blood sugar since eucalyptus may affect blood sugar levels. Eucalyptus may affect the metabolism and clearance of drugs, so anyone under medication treatment should avoid the use of eucalyptus.