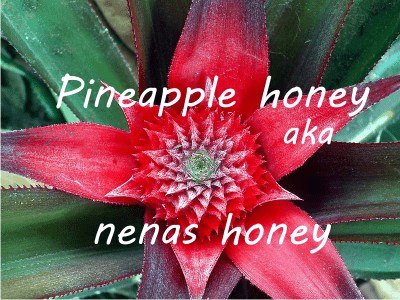 Pineapple honey is a rare type of honey, also known as nenas honey in Malaysia. Although pineapples have a wide distribution around the world, its nectar is not sought by honey bees and their pollination is not needed. This honey is often find in countries that encourage beekeeping and when the hives are placed in the middle of a pineapple crop. In other words, by forcing the bees to collect that type of nectar.

Pineapple is the 3rd most important cultivated tropical fruit, after bananas and citrus. The fruit is highly regarded for its distinctive flavor, sweet flesh and juice. It is an excellent source of vitamins A and C, potassium and manganese.

Pineapple honey is produced by the European honey bee Apis Mellifera from the nectar of Ananas Comosus flowers.

Scientific name: Ananas comosus
Other names: nanas and ananas in South America and the Caribbean, nenas in Malaysia.
Cultivars: over 30, grouped into 4 main classes for convenience in trade: ‘Smooth Cayenne’, ‘Red Spanish’, ‘Queen’ and ‘Pernambuco.
Producers: Some of the largest producers of pineapple are Thailand, the Philippines, Brazil, China and India. Pineapple is also an important crop in Hawaii, Malaysia and Kenya.
Origin and distribution: It has been in cultivation for thousands of years, and so its exact origins remain unknown. 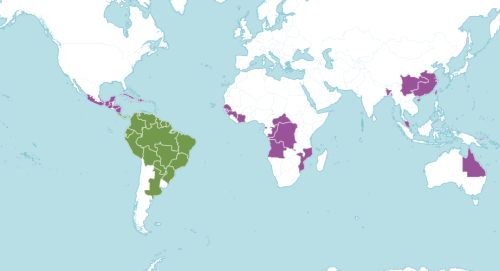 Pineapple always was and still is a very important part of the diet of native Americans in the lowland tropics. They ate the fresh fruit and used it to prepare alcoholic beverages such as pineapple wine, chicha and guarapo . 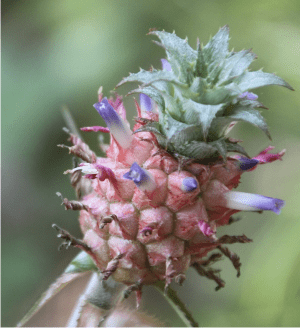 Pineapple is a plant that has been altered by humans through a process of selective breeding, and is called seedless cultigen. We all know the fruit. The plant is a tropical herbaceous perennial, 1-2 m tall and wide with leaves spirally arranged. The fruit is created from the flowers.

The flowers are borne on an inflorescence consisting of 50 to 200 individual flowers borne spirally and capped by a crown made of approximately 150 short leaves on a short stem. The flowers are small, purple or red, each accompanied by a single red, yellowish or green, fleshy bract. Each flower is composed of three sepals, three petals, six stamens and a three-chambered ovary.
The flowers are hermaphroditic (contain both male and female reproductive organs) and the flowering lasts for 10 to 20 days.

The flowers are elongated and tubular in shape. Three nectar secreting glands are located on the ovaries, which open into the flower cup at the bottom of the style. The nectar is secreted inside the blossom cup and it seeps on the sepal and bract surfaces at the base of the flower (Okimoto, 1948)
The flower will develop into a berry-like fruitlet.

Baker & Baker 1975, 1983 found that pineapple nectar concentration is diluted. It is therefore not surprising that butterflies and sunbirds were the main visitors rather than bee visitors, which prefer concentrated nectar.
Diluted nectars are easy to imbibe and are preferred by long-tongued nectarivores such as lepidopterans and
hummingbirds.

In Australia pineapples flowers are visited by honey bees (Apis Mellifera), native bees, pineapple beetles (Nitidulid spp.) and ants. They feed on the nectar and play a relatively minor role in nectar dispersal and cross pollination.
Mealy bugs (Dysmicoccus brevipes) feed on plant sap and produce honey dew – which can subsiquently be eaten by honey bees and turned into honey.

In Ghana pineapples are visited by 14 species of butterflies and one ant species were the main insect floral visitors as well as 4 species of sunbirds. The mean nectar concentration was 23.3% (± 0.39, SE) and pollination limitation did not significantly affect fruit yield. One study showed that butterflies, ants and sunbirds are the main floral visitors on A. comosus. (Andreas A. KUDOM et al, 2010)
It was  found that A. comosus provides an important nectar resource for its foragers.

Apis Mellifera (along other insects) were seen in the pineapple farm collecting nectar from flowers of weeds and other plants but not foraging on pineapple flowers. In fact they are were even seen collecting juice from the over-ripped and rotten fruits of pineapple.
Honey bees may also collect the honey dew they found on the fruit, produced by pineapple’s pests.

In Australia Apis mellifera and native bees were occasional visitors that feed on the nectar and play a relatively minor role in pollen dispersal and cross pollination (Purseglove 1972; Wee & Rao 1979). They collect juice from the over-ripe fruit.

In Malaysia, hives of Apis mellifera are placed inside crops and pineapple honey aka nenas honey is produced. Studies conducted by the DoA and MARDI reveal that coconut and pineapple productions were increased after bee pollination was introduced to the farms (Department of Agriculture, 2012; Jaafar, 2011a; Mian, 2009).

It is relatively sticky, travels very short distances and remains viable for short periods of time. The pollen grains could be stored in cool, dry air for 15 days with minimal loss of viability (Kerns et al.,1931 and 1936).
The pollen grains have a spheroidal shape, bilaterally symmetrical and contain 2 apertures. The size can vary between 35 to 81 microns.

Fruit:
It is a seedless, juicy syncarp (multiple fruit, produced by fusion of fruits from 100-200 flowers) up to 30 cm long, crowned with 20-30 leafy bracts. The tough, waxy rind, made up of hexagonal units, is dark-green, yellow, orange-yellow or reddish when the fruit is ripe. The flesh ranges from nearly white to yellow.

Native Americans have used pineapple medicinally against parasitic worms and amoebic parasites, to treat stomach complaints and to induce abortion and stimulate menstrual flow. Most of these uses relate to the presence of the enzyme bromelain, which breaks down protein.

Bromelain extracted from pineapple has been shown to interfere with the growth of malignant cells, to inhibit clotting, reduce inflammation and help remove damaged tissue from wounds.

! Consumption of unripe fruit can cause irritation to the throat and act as a strong purgative. Many people react to fresh pineapple with an outbreak of a skin rash or hives. External exposure to juice alone can also cause this reaction in some people. Those who react this way should reduce intake of uncooked fruit or eat only canned fruit.

How is pineapple honey aka nenas honey?

Most of the available pineapple honey comes from Malaysia. Pineapple is one of the major commodity crops in this country. It was most researched at the Univesiti of Malaysia, which has been seriously involved in studying all types of Malaysia honey and not only.
Here are the main characteristic of Malaysian pineapple honey according to Mohammed Moniruzzaman et al. in various studies published in 2013

Read more about the composition of honey:
• Minerals and trace elements in honey
• polyphenols in honey and what are they good for
• Enzymes in honey
• Vitamins in honey
• Sugars of honey

• According to the study Effect of Nenas honey supplementation on the oxidative status of undergraduate students, by Jo Aan Goon et al and published in 2014, nenas honey decreases oxidative stress which leads to a reduction of antioxidant enzyme activities in the body.

• Another study from 2012,conducted by Wen CT, indicated and confirmed that both Gelam and Nenas honeys are capable of suppressing the growth of HT 29 colon cancer cells by inducing apoptosis and suppressing inflammation.