Heather honey has a great taste and is a powerful antioxidant 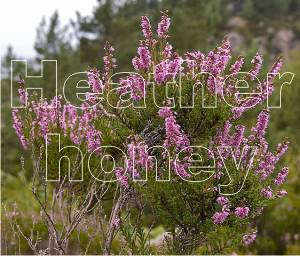 Heather honey has a high reputation. It’s a strong one, the love-or-hate type. Heather honey benefits for health are connected mainly to its high antioxidant activity. In Great Britain, it is highly-prized by connoisseurs and known as the “Rolls Royce” of honey.

Heather honey is one of those things that you either hate or adore!

Heather, on its botanical name Calluna vulgaris, is the sole species in the genus Calluna in the family Ericaceae.  The name Calluna, comes from the Greek kallunein, which means “beautify, sweep clean”, as traditionally these plants were used to make brooms.
It is a low-growing perennial shrub that grows to 20 to 50 centimetres (7.9 to 19.7 in) tall, on dry acidic soils in open sunny areas and in moderate shade. There are other plants that can be called heather and they both give us honey:
– Calluna vulgaris which means common calluna, common heather, aka ling. It is differentiated from Erica by its corolla and calyx each being in four parts instead of five. Calluna has small scale-leaves (less than 2–3 mm long) borne in opposite and decussate pairs. It flowers in late summer and these are usually mauve, sometimes white.
– Erica spp also gives a very appreciated honey. It has leaves that are larger and in whorls of 3-4,or 5.

How can we differentiate them:
If we need to do that, their blossom time is the best to tell us which is which. Erica makese flowers in spring, heather in late summer. For bees, these flowers are the last they can find to make honey.

In Britain, on August 12 (known as “the Glorious Twelfth”) beekeepers move their hives into moors to coincide with the blossoming of the heather. At this date, another popular tradition, the Grouse hunting season, also starts.
The heather flowers will have nectar only for 4 or 6 days during the entire season, so for beekeepers it’s important not to miss them.

Where do we find it?
Calluna vulgaris (heather) is widely distributed in the Northern and Western countries of Europe, in its most heathland and moorland, especially in Scotland, Wales and Northern England. It represents one of the most important resources for honey production in the late summer.

What is calluna good for:
It is an important food source for various sheep and deer, which can graze the tips of the plants when snow covers low-growing vegetation. It lasts that long. In the past, heather was used to dye wool yellow and to tan leather, or to make brooms.

Ling Heather is a symbol of Scotland and is considered to bring good luck.
It is also one of the national flowers of Norway.

How is heather honey?

pH: 4.2
Pollen percent: often under the 45% limit. (could be because of the specific extraction technique)

Acidity level: high
Free acidity (meq/kg): 22.7 (Poland) to 42.3 (Spain)
Moisture content: high, around 22% (The European Directive allows a water content of up to 23 g/100 g and includes this honey in a group whose electrical conductivity may go beyond the 0.8 mS/cm limit.) Specific characteristic: very high thixotropy – meaning it turns into gel, when at rest.

Heather honey has an unusual texture, due to its thixotropic characteristic, being a jelly until stirred, when it becomes a syrup like other honey, and turning again to a jelly.

Both heather (Calluna vulgaris) and manuka (Leptospermum scoparium) honeys are described as thixotropic. This means that they are gel-like (extremely viscous) when standing still, but they can turn liquid when agitated or stirred.
The viscosity of heather honey is so high that makes the extraction of the honey from the comb very difficult. That’s why, this honey is extracted by pressure (instead of centrifugation), which destroys the combs.

Thixotropy is explained by the presence of colloidal proteins.

The herb has been used in the traditional Austrian medicine internally as tea for treatment of disorders of the kidneys and urinary tract.

Other types of heather honey

There are other honeys obtained from Erica species also belonging the heather honey family. These are generally multifloral honeys derived from plants such blueberries, rhododendrons, strawberry, cranberries.

White Erica honey: Made from Erica arborea, harvested in May, mainly in Spain, France, Italy and North Africa. It is dark colored with hues of orange and turns light brown upon crystallization. It has an aroma of cocoa and caramel and a strong taste that is sweet and slightly bitter. It crystallizes fast into crystals with smooth texture. To enjoy its sharp taste it should be taken with mildly flavored foods.
In Scotland white heather is considered to bring luck, sprigs of it are often sold as a charm and worked into bridal bouquets.

Bell Heather honey: made from Erica cinerrea, harvested in the end of August, in Europe, Germany, Norway, Italy and Portugal. It’s dark brown in color and gets crystallized gradually. It has a strong smell and woody taste, minty and slightly bitter.

Snow Heather honey: Snow heather is an amber colored honey that turns yellow upon crystallization. It is found in Central Europe and blooms from January to April. It’s a honey from snow heather, with a strong pungent aroma of caramel, flowers and dry fruits.

Autumn Heather honey: made from Erica Manipuliflora. It’s an autumn heather species, which gives a dark honey that crystallizes in 2 or 3 months and gets a lighter color. It contains high amounts of trace minerals and is mildly sweet in taste. Different from the other heather honeys is its high amount of pollen, Which makes it a best remedy for hay fever and prostrate infections.

The study was made at Glasgow University’s School of Veterinary Medicine, which found that the honey from the Inverness area, effectively kills the strains of bacteria that cause MRSA and three other types of bacteria at concentrations of two per cent.
Dr Patrick Pollock, an equine surgeon who conducted the research, said the new findings suggest that the honey could be used for treating humans and animals. heather honey helps to promote healing, cleans the wound and keeps it infection-free. The type of antibacterial property seems to given by hydrogen peroxide activity.

The high amount of antioxidants of heather honey help in removal of free radicals produced as a result of metabolic reactions and interactions with external pollutants. Removal of these free radicals prevents aging and also improves the overall health.

How to enjoy heather honey: Not in tea. It might taste too strong.
BUT,

· The strong unique flavor and consistency of heather honey makes delicious dishes. It amazing with (Greek) yogurt or with ice-creams or pancakes. A real heather honey has small air bubbles trapped in it. On top of your ice-cream it will shine in the light!

· Gives coffee a strong smoky taste and can even join strong cheese.

· It was also once used in to make mead (link to the article “What is mead”).

· The popular Scottish liquor Drambuie uses heather honey as one of its contents in addition to malt whiskey, spices and herbs.

· You can try it on gingerbread! The spicy flavor of this honey enhances the flavor of your favorite gingerbread and may turn into a habit for you. As I said, you will either love or hate this honey.

Heather honey has a great taste and is a powerful antioxidant was last modified: June 22nd, 2019 by Laura
Laura 05/09/2015
Rapeseed honey aka rape honey, perfect for your ulcer diet! Sweet chestnut honey