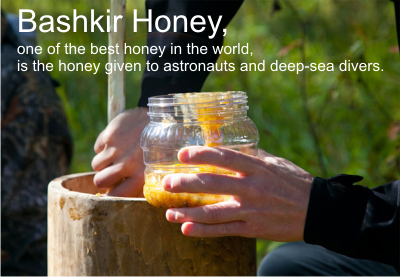 Would you give $223 for a kilo of honey? Coming from Russia, Bashkir honey is considered to be the best honey in the world. And the most expensive.

In the post about antioxidants in honey I was mentioning Bashkir honey as a type of honey given as part of the daily meals to astronauts and deep-sea divers. It is also considered to be the most expensive honey in the world. Even €200 per kg.
Though in some places manuka honey with high grading, Lavander honey and Sidr honey can also be highly expensive. Not to mention the famous Elvish honey – found in Turkey, which reaches €5,000!

But why is Bashkir honey so expensive and why so precious as to be given to astronauts?

It is different then our regular honey.

• it is made by a different kind of honey bee, the pure wild European black bee → different enzymes added to honey
• it is yielded in tree hollows
• it is made of linden and regular plants, but from an unpolluted high altitude zone.
• it is collected only once a year, when the the beekeeper closes the honeycomb for the winter.

Regular honey is obtain in frame-hives using the domesticated honeybee European Apis Mellifera.
Bashkir honey is made by the Burzyan wild-hive bees, belonging to the European black bee, Apis mellifera mellifera.  Scientists at the Ufa Scientific Centre of the Russian Academy of Science have been monitoring the gene pool of the Burzyan honey bees for the last 20 years. In 2011, at the request of the Institute of Beekeeping and
Shulgan-Tash State Reserve, bees from this population were classified as a separate type: Burzyan wild bee. (And registered in the State Register Patent No 5956 on 14 June 2011 by the State Commission of the Russian Federation.)
This species is listed in the Russian and Bashkirian Red Books of endangered species.

What’s different about them? Where are these bees living?

Bashkir honey is harvested in the area of Outstanding Universal Value of Bashkir Ural which is recognized as a World Heritage by UNESCO.

1. in the southern Urals in the Shulgan-Tash State Reserve, where they live in natural and handmade tree hollows. The reserve was established in 1958 and it covers an area of about 54,000 acres. In order to preserve the unique nature, Greenpeace is actively offering as much support as possible.

The zapovednik staff works in a variety of ways to conserve ecosystems in the Shulgan-Tash Zapovednik, employing scientific research and practical applications, environmental education and ecotourism, and protection measures to ensure the maximum conservation regime while promoting public support for reserve activities. The zapovednik has well-developed tourist facilities, including a guesthouse, nature trails, and demonstrative bee-keeping areas. Campgrounds and other facilities are provided for tourists. Rafting on the Belaya River is a favorite family pastime.

3. in the Bashkiria National Park, established in 1986 with an area of 203,000 acres. Burzyan is one of the remote mountain Bashkir regions, with unique virgin forests and plants isolated from industrial civilizations.

When speaking about Bashkir honey we refer to wild honey from the Burzyan region.

• It has beautiful amber, golden-amber and light amber colors. It is considered a polyfloral honey and has aromatic flavors with a hint of emanation from meadow flowers.  The honey gives rich mouthfeel with attached pleasant aftertaste that satisfy everyone who is looking for unaltered gifts of Mother Nature.

• Elite Bashkir Honey won more than 50 gold medals on different international exhibitions, yet it is still not established on the world markets. It is a regular champion of the famous International Green Week Berlin.

• Many experts and scientists affirm that tasting and medicinal properties have no analogs in the world.

• It is Russia’s #1 honey brand. In Moscow it is found with prices starting from €50 to €200. Still, it has never been on world markets. It was only established in some luxurious restaurants of Europe.

•  The special value of wild-hive honey is in its maturity: It is collected only once per year, in autumn, so it has time to fully mature.

•  It is appreciated for the presence of a large number of trace elements and the absence of harmful impurities, as well as for its particularly harsh taste and delicate aroma.
In Russia, linden leaves are considered one of the most active natural medicinal plants. Curative substances of the flowers are better preserved in rather cold conditions. Its composition includes ferments and vitamins, about twenty amino acids and mineral aromatic substances. It is said that considering its medicinal and tasting properties, Bashkir honey has no analogs in the world.

What is the floral source of Bashkir honey?

Bashkir honey is considered a multifloral honey, but linden is the main floral source of this honey. And Bashkiria is the linden capital of the world.
In Bashkortostan there are about 35% of all Russian linden trees. Honeybees can collect this pure white monofloral honey of special quality and properties. As another plus, linden honey crystallization is rather late, so the color and consistence remain amazing for a long time.

The Small-leaved Linden
This tree, tilia cordata, is the primary nectar source in Bashkir forest, giving up to 70 – 80% of marketable honey. Particularly high nectar producers are old-growth forests of linden trees.

One hectare of linden tree in blooming time has 15 -17 million flowers that produce up to 500 – 700 kg elixir-like nectar. During one blooming period of linden tree (which is 2 or 3 weeks), a bee family gives from 40 to 100 kg honey yield. (compared to buckwheat or sunflower that can yield only 20 to 40 per one bee family).
During a good honey flow, bees can bring to a hive up to 10 kg of nectar per day! Of course, the weather conditions during the linden bloom significantly affect the duration and intensity of nectar production.

Willow
In the spring forest goat willow (sálix cáprea) starts blooming first. It grows as a large separate tree, blooming for 8 -12 days before leaves, to unfold in late April to early May. Maple, willow and oak altogether give impulse to bee colonies to grow at an optimal rate.

Norway maple
It blooms in the middle of May for 8-10days before leafing.

Oak
Oak often grows in all forest areas west of the Urals and in the Urals. It blossoms in the second half of May.

Other plants:
Bashkiria, especially Burzyan zone, is considered to be one of the main places in the world with an incredible quantity of rare medicinal honey-giving plants (more than 500). Among the other plants recognized in Bashkir honey: dandelion, thyme, clover, alfalfa, sage, galium, yellow melilot and many others.

Where can we buy Bashkir honey from?

It is really difficult to find real Bashkir honey made from the Buznian wild bees. On the market we can find honey from Bashkir region but from regular hive beekeeping. Here is an example: russianfooddirect.com/.

On Amazon we can also find some buckwheat honey from the Bashkir region, or simply Bashkirian Raw Mountain Honey made of many plants and trees, or monifloral honeys like  Linden Honey or Acacia Honey.

Burzyan wild honeybees occupy natural cavities in trees but are also attracted to artificial hollows carved out by humans.
This beekeeping does not require iron tools, and the accumulated skills were passed on through many generations of hollow tree beekeepers (Kosarev et al, 1999).

The experienced wild beekeepers build artificial hollows inside the trees, the so-called boards.
It’s not easy to do that, but these rangers have developed a bear-like agility and all necessary skills to stabilize the threatened bee population. They are all descendants of keepers of wild bees and employ instruments and skills that have been passed down in their families for centuries: how to select a tree and how to build a hive that would attract bees.

The hollow is usually made in a growing pine, about the height of the fifth floor. It should be paid to the south, nearby linden trees and clean water. Wild bees will settle there in a year or two.
Sometimes, instead of cutting out the hollow, a specially prepared deck is brought at the suitable height and tied to the tree.  Deck – is the exact same board only made in the stump of the trunk.

The unique tools used by the Bashkir beekeepers are:
the Kiram and the Lange. A Kiram is a braided leather belt up to 5 m in length used for climbing trees. A Lange is a small portable platform, which is fixed on the tree trunk with a rope (Kosarev, 2014).

After the hollow is ready, these wild beekeepers have secrets for attracting bees such as: rubbing  fragrant herbs inside the hollow, pasting pieces of honeycomb etc.

When the time comes to collect the honey, the man puts on his soft shoes, ties himself by the tree with a special belt and climbs the incisions previously made in the bark, till the level of the hollow (sometimes 15-16 meters from the ground). (Bees, surprisingly, do not worry, apparently taking a scout for a cloud.) After he secures himself in a special “podstavku”, the beekeeper starts fumigating and doing his job. He will always be very careful and not completely ruin the hollow by taking all the honey. Bees need supplies during winter and the beekeeper knows when to stop.

Author Rustem Ilyasov mentions that these methods have been practiced since 500-600 years ВС. Wild beekeeping was at its peak in Bashkiria in the 18th century. By the 20th century, agriculture, industry, and logging resulted in the fall of wild beekeeping. The tradition was nearly lost, remaining only in the mountain forest areas of Bashkiria. The purebred Burzyan honeybee almost disappeared from the region. Scientists say that the Shulgan-Tash Zapovednik is the only place in the world where the wild bees are still found.

Conclusion? Bashkiria is a place where people are still engaged in the ancient business of wild-hive beekeeping, for more than thousand years, gathering honey not in apiaries, but inside trees. But beekeeping is one very important side of life here, so in the South Ural, besides wild beekeeping, 99% of honeybees colonies are kept in frame hives in apiaries, and only 1 % in natural and specially made tree hollows.
Wondering why wild Bashkir honey is so expensive? This is one of the reasons as well.

Here is a video presenting the Bashkir land from myth and legend to precious honey and wild-hive beekeeping. With English subtitle.

Here are some Polish wild hive beekeepers at work – after learning how to do this from Russians. Unfortunatelly there are no translations, but you’ll figure it out for sure.

HAVE YOU FOUND WHAT YOU ARE LOOKING FOR?
if not, give Google another try!

7 thoughts on “Bashkir honey, the most expensive honey in the world, food for astronauts!”