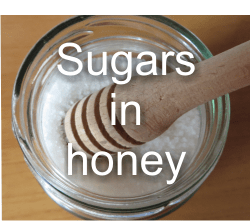 Some say it is the sweetest natural food. There are many sugars (carbohydrates) in honey and they all count for its sweetness. However, the sweet taste is different with each type of honey, as they all contain different types of sugar.

Why is honey so sweet?
Because it is made from the nectar honey bees find in flowers, which is really sweet. And because other sugars are subsequently formed under enzymatic process.

What is the nectar of a flower?
A liquid secreted by plants in glands called nectaries, either within the flowers or by extrafloral nectaries. Honey bees are attracted to both forms of this nectar. They resort to extrafloral nectar whenever the plant doesn’t have enough nectar into the flower (as it is the case with cotton, when they choose the nectar found in the first 2 days of the blossom and then turn to extraforal sources).

It’s a less common type of nectar. Its composition differs from floral nectar, varies by taxa, and may or may not flow in a daily pattern. Generally it is about 95% sugar and 5% a wide array of amino acids and other important nutrients.

Why does a plant secrete extrafloral nectar?

Scientists have come with 2 possible functions:
1. as an excretory organ for the plant to rid itself of metabolic wastes
2. to attract beneficials for plant defense, by providing a nutrient source to some animal mutualists, which in turn will protect the flower from being eaten by herbivore animals. Many insects have been observed feeding on it: ladybirds, ants (a great many species of vines have EFN and the evolution and selection for EFN is hypothesized to occur as a direct result from the ants using the vines frequently as natural pathways into the forest canopy).

Depending on the species, a flower’s nectaries can be located on its petals, anthers, stamens, sepals, pistils, styles, ovaries or other parts of the flower. With this nectar flowers attracts pollinating insects. Common nectar-consuming pollinators include mosquitoes, hoverflies, wasps, bees, butterflies and moths, hummingbirds, and bats.

But not all flowers produce nectar. As a rule, nectar is produced as a food reward to attract pollinators. Plants that are wind pollinated, for example, will not produce nectar. Some plants are hermaphroditic, meaning they’re both male and female. These plants tend to produce nectar every day.

To attract pollinators the flower itself is the signal and the nectar is the reward. The nectar is clear, transparent. But some flowers, like some on Mauritius, that change this pattern. Trochetia boutoniana (see picture) shows off dark red nectar against a blue background and Trochetia blackburniana produces yellow nectar, which it shows off at the center of a yellow flower.
The invasive plant called purple loosestrife (Lythrum salicaria), in Minnesota, has a nectar that is faintly green in color. (“It makes honey gathered by local bees the same color as motor oil.” – says Givesgoodemail from Minnesota.)

Nectar composition differ from flower to flower and some are more attractive to certain pollinators. For example:
– butterflies are very attracted to dandelions, thistle, Centranthus ruber, pink Jupiter’s beard, and lantanas in numerous colors.
– hummingbirds are attracted to lupine, California fuchsia and mimulus, sometimes called monkey flower. They also monarda (with pink, red or purple flowers), penstemon, aquilegia or columbine and digitalis or foxglove. Or the annual cardinal climber, Ipomoea sloteri, commonly known as the hummingbird vine.
– bees have their favorites, too. While hummingbirds are attracted to red flowers, bees are often attracted to blue ones: salvia, Russian sage, catnip, wisteria and sea holly, borage or eryngium. But also penstemon, California fuchsia, verbena and lamb’s ear or stachys. And to herbs such as rosemary, basil, calamint and lavender.

Honey bees are attracted to flower nectar according to its quantity of sugar. They prefer nectar with higher sugar content, around 50% and will not forage at all if sugars are below 5%. Bees gather this nectar for their energy needs provided by sugar. The greater the sugar value of a plant, the more it is visited by bees for foraging.

The sugar value ranges widely, from 0.0005 to 8 mg. The principal sugars in nectar are fructose, glucose and sucrose.

Sugar concentration depends on species and different climatic factors as temperature, soil, humidity and season. Therefore it is not possible to foresee nectar production.
· Humidity: when humidity is higher the nectar quantity is greater, but the sugar concentration is smaller.
· Temperature: the optimum temperatures are between 10 to 30°C.
· Wind: strong winds diminish nectar secretion.
· Daytime: maximum secretion is at noon and in the early afternoon.

There have been more than 25 different sugars identified in honey, comprising about 95 % of honey dry weight. (Donner 1977, SIDDIQUI, 1970)
Fructose (averaging 38%) and glucose (averaging 31%) are the main sugars in honey, monosaccharides, that is, simple sugars.
Sucrose is also present in some honeys, usually comprising a little over 1% of the composition of honey. It is composed of fructose and glucose linked together, a disaccharide.
Some other sugars are also present in different honeys: maltose (in linden, acacia, lavender), turanose (acacia), erlose, levulose (in cotton honey), melezitose and raffinose (in honeydew honey), perseitol (in avocado honey) etc.
Oligosaccharides are mainly a product of honey invertase (WHITE J W,1975). Read more about Enzymes in Honey.

Other sugars present in honey:

The concentrations of these sugars differ from species to species, geographic origin and weather conditions, collection season, mode of storage, bee species, and even interactions between chemical compounds and enzymes in the honey.

As seen in the table above, there are differences in the composition of sugars between honeydew and blossom honeys. Honeydew honey is characterized by a higher concentration of oligosaccharides, mainly the trisaccharides melezitose and raffinose, which are usually not found in blossom honeys.

We know honey is liquid. But sometimes honey becomes semi-solid to rock-solid! It doesn’t mean it is bad or spoiled. Crystallization is a normal process that happens to honeys, sooner in some and later in others. With the exception of commercial “pure” honey which is so filtered and pasteurized in order to remain liquid for a longer period of time, that this actually happens. They stay liquid.

Some honeys crystallize sooner than others and this happens due to different sugars contained.
As a rule honeys with more than 28% glucose crystallize fast, while those with less than 28 % remain generally liquid. Read more about crystallization here: Honey Crystallization.

Why are some honeys sweeter than other honeys?

All honeys are sweet, due to the presence of the sugars fructose and glucose. However, fructose is 2.5 times sweeter than glucose. So, those honeys which have more fructose than glucose are more sweeter than those with a higher concentration of glucose.

The sweet taste will be influenced by acidity, aromas and by crystallization.

Bitter taste:
Bitter honeys, like linden and sweet chestnut, seem less sweet than honeys with weak taste like acacia. Bitterness is also a special characteristics of the world´s most bitter honey harvested in Italy and Greece, from the Strawberry Tree (Arbutus unedo).

Sour taste:
The sour taste depends on the acidity of honey. It may also be influenced by the skills of the beekeeper: if treatments of Varroa with organic acids are not carried according to the prescriptions during the honey flow, they can influence honey taste and make it more sour.

How is honey compared to table sugar?

The density of honey is of about 1.36 kilograms per litre.
One tablespoon of honey weighs 21 grams and has approximately 17 grams carbohydrates and 64 calories (kcal).

! Every time I said honey in this article, I referred to raw fresh honey only. 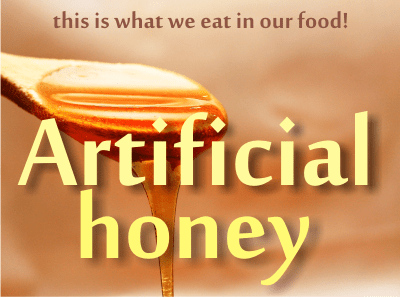