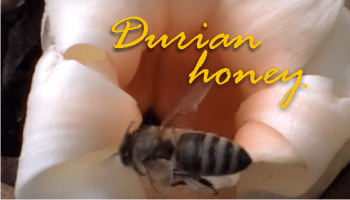 Coming from the durian flowers, which will give the exotic tropical fruit known as the stinkiest fruit on Earth, durian honey is far from having any kind of unpleasant smell.

Scientific name: Durio zibethinus Murr.
Species: 30 recognised Durio species, at least 9 of which produce edible fruit, with over 100 named varieties in Indonesia, 300 in Thailand and 100 in Malaysia. D zibethinus is the only species available in the international market, the other species are sold only in their local regions.
Other names: durian

Distribution: Due to its odour, the fruit is not largely commercialized, so if you are not from Asia, chances are that you haven’t heard of it. It is native to Brunei, Indonesia, and Malaysia and is cultivated in similar tropical climate, where temperature doesn’t drop under 22°C (72°F). The center of ecological diversity for durians is the island of Borneo. 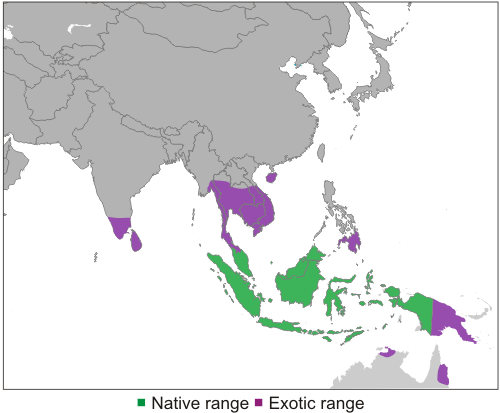 Main chracteristics:
Durio zibethinus Murr is a tree belonging to the genus Durio, that grows up to 25–50 metres (82–164 ft) in height depending on the species. The leaves are evergreen, elliptic to oblong and 10–18 centimetres (3.9–7.1 inches) long. The flowers are produced in 3 to 30 clusters together on large branches and directly on the trunk with each flower having a calyx (sepals) and five (rarely four or six) petals. Durian trees have one or two flowering and fruiting periods per year. (wiki)

Durian flowers are large and feathery and give plenty of nectar but also a heavy, sour, and buttery odor.

As for pollination, it was first believed that these flowers were visited exclusively by cave fruit bats (Eonycteris spelaea), but then a later study indicated that two species, Durio grandiflorus and Durio oblongus, were pollinated by spiderhunters (Nectariniidae) and another species, D. kutejensis, was pollinated by giant honey bees and birds, as well as bats. 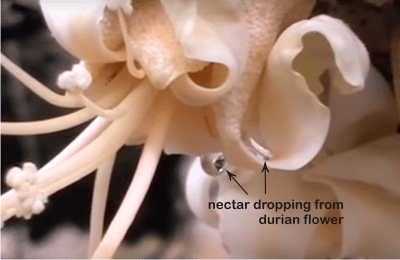 Beekeepers today bring their hives of Apis Mellifera and place them exactly under the durian trees. As nectar is plenty, good honey is guaranteed.

3 months after pollination a durian fruit matures. It is a large fruit, up to 30 centimetres (12 in) long and 15 centimetres (6 in) in diameter and a weight of 1 to 3 kilograms (2 to 7 lb). The colour of its husk is green to brown, and its flesh pale-yellow to red, depending on the species.

It has five cells filled with a mass of firm, cream-coloured pulp, containing about three seeds each. This pulp is the edible part.

Durian fruit is not only edible, has a unique taste and organoleptic qualities, but is very nutritious, too. It is full of bioactive compounds, volatiles, antimicrobials, vitamins and minerals, but there are also toxicological effects of durian fruit consumption. I have found a very good website that presents all its good health benefits and also its toxic potential: docksci.com/.

How bad is the smell?

“.. its odor is best described as pig-shit, turpentine and onions, garnished with a gym sock. It can be smelled from yards away.”
Other comparisons have been made with the civet, sewage, stale vomit, skunk spray and used surgical swabs. (Davidson,1999)

This strong odour can be detected half a mile away by animals, thus luring them: squirrels, mouse deer, pigs, orangutan, elephants, and even carnivorous tigers.

Due to its odor the raw fruit is forbidden inside some establishments such as hotels, subways and airports, including public transportation in Southeast Asia!

There have been detected over 50 compounds in durians. “What’s interesting is that none of the compounds individually seem to match with the characteristic durian smell—they range widely and include labels like fruity, skunky, metallic, rubbery, burnt, roasted onion, garlic, cheese, onion and honey,” writes Joseph Stromberg in The Smithsonian.  “A number of them have been detected in just a few other substances, such as cooked beef, yeast extract, dried squid and leeks. Somehow, the combination of these 50 chemicals produces the powerful scent that has entranced and repulsed people the world over.”

From all the 3 tested honeys, the most potent were: gelam honey, tualang honey and then durian honey.
Durian honey was more effective against Klebsiella pneumoniae and then against: S. epidermidis, S. aureus, E. coli, E. faecalis and S. enterica ser. Typhimurium and totally ineffective against the rest. Yet, it is not considered to have high antibacterial activity, not as high as gelam or tualang honeys.

• Durian honey was found to help burn wound tissue. In a study done on 105 rats different types of honey were used to treat burns. The results after 21 days showed that the best was manuka honey, followed by durian honey and nenas honey. On the last places were gelam honey and kelapa honey (from C. nucifera) (Rozainni et al., 2004).

Conclusion:
The studies done so far, showed that durian honey has regular health benefits, without standing out for some in particular. More research is needed to understand the composition of this type of honey and its effects on our health. 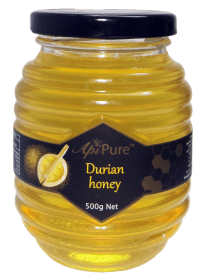 Where can we find durian honey?

From my European point of view, this is hard to tell. I could only find a few online shops, but no guarantee it is the real deal. Amazon doesn’t have it. Maybe this site is more trustful: honeyworld.sg/.
If you do know a good source, please leave a comment here.

6 thoughts on “What is durian honey?”