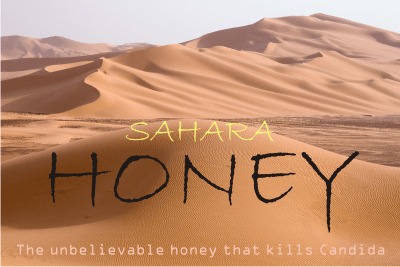 Yes, there is honey in the desert. It sounds really intriguing, but the Sahara is not only hot desert with no water and no vegetation. Things are not that extreme on all its surface. There are still oases with vegetation, flowers and insects. Among them, there are honeybees that managed to remain isolated from the rest of bees of the world, for at least 5,000 years. They are free of the omnipresent parasite called “varoa mite” and the plants they harvest are mostly medicinal. Not to mention organic.

A clean, pure and medicinal honey. Like its close relatives from the neighborhood, sidr honey and euphorbia honey (aka spurge honey). 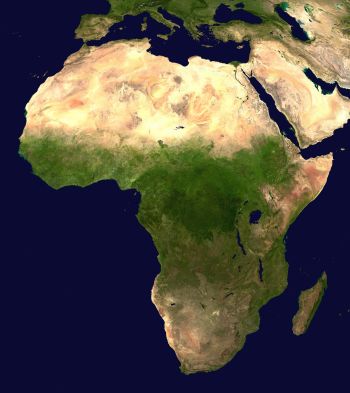 Sahara is the largest hot desert and the third largest desert in the world after Antarctica and the Arctic. Its area of 9,200,000 square kilometers (3,600,000 sq mi) is comparable to the area of China or the United States. Sahara occupies large parts of Morocco, Algeria, Tunisia, Libya, Egypt, Mauritania, Mali, Niger, Chad, Sudan and a small part of Senegal and Burkina Faso.

The central Sahara is hyperarid, with sparse vegetation. The northern and southern reaches of the desert, along with the highlands, have areas of sparse grassland and desert shrub, with trees and taller shrubs in wadis, where moisture collects.

The sunshine duration is extremely high everywhere in the Sahara and the average high temperature exceeds 38 to 40 °C (100.4 to 104.0 °F) during the hottest month nearly everywhere in the desert except at very high altitudes. The highest officially recorded average high temperature was 47 °C (116.6 °F) in a remote desert town in the Algerian Desert.  During daytime, the sand temperature is extremely high as it can easily reach 80° C (176° F) or more. The average diurnal temperature range is typically between 13 and 20° C (23.4 and 36.0° F).

Vegetation in the Sahara Desert

There are various plants that grow in the Sahara Desert, around 2800 species of vascular plants and approximately a quarter of these are endemic and are more concentrated in oases and along river beds. About half of these species are common to the flora of the Arabian deserts.

Plants such as acacia trees, palms, succulents, spiny shrubs, and grasses have adapted to the arid conditions, adapted to unreliable precipitation and excessive heat. The leaves turned into spines to prevent excessive loss of water from the plant body and have deep roots to get to water source. Plant leaves may dry out totally and then recover.

Prominent among the woody plants of the Saharan highlands are species of olive, cypress, and mastic trees. Other woody plants found in the highlands and elsewhere in the desert include species of Acacia and Artemisia, doum palm, oleander, date palm, and thyme.
Halophytes such as Tamarix senegalensis are found along the western coastal zone.
Grasses widely distributed in the Sahara include species of Aristida, Eragrostis, and Panicum. Aeluropus littoralis and other salt-tolerant grasses are found along the Atlantic coast. Various combinations of ephemerals form important seasonal pastures called acheb. 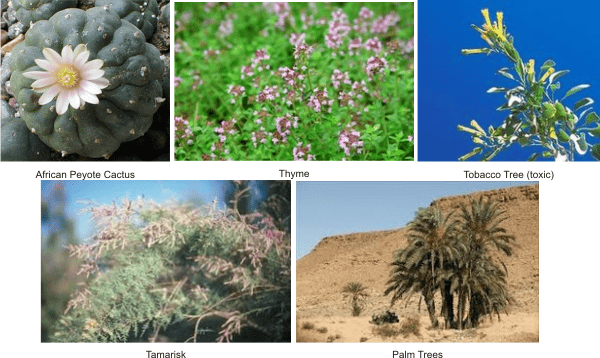 There are also lots of medicinal plants:
– C. schoenanthus is extremely common. Its floral panicules are used for making febrifuge infusions while the roots are fragrant and used in perfume manufacture.
– Caper Capparis spinosa L. , whose floral buds or capers are used as a condiment and are much sought after for the special flavour given to them by a sulphuretted essential oil. It’s found in abundance in the rocky areas of the Sahara but also widely distributed in Morocco, Tunisia and Algeria and as far as East Africa.
– Z . lotus Lam is found throughout the Sahara desert. The commonest species is the Saharo-Sindi A. maurorum D.C . (= Hedysarum alhagi) which secretes manna.
– C. acutifolia grows in the desert parts of Nubia where the drug was long gathered from the wild plant.  It is common in the southern Sahara but has also been reported it in the French Sudan section of the Sahara.
For many years this senna was processed for the market with meticulous care and formerly had a commercial importance which it has now lost.
– C. obovata is distributed over the whole of the Egyptian Sudan and it is common in the south and central Sahara down to Upper Senegal, the Niger and the Chad areas.
– Nerium oleander L. contains a cardiotonic heteroside, oleandioside, which is used in medicine to a very limited extent. This evergreen shrub is found along the wadis into northern Sahara where it is again found in quantity in the Tassili and Hoggar mountains.
– Calotropis procera Ait., a small tree with large leaves of Saharo-Sindi origin, common in the central and southern Sahar
– L. antineae Maire, which is endemic in the Sahara and produces manna. One component identified in this manna is saccharose, and melezitose.

Scientists say that around 10,000 years ago, the Sahara was a green savannah, a habitat well suited to honeybees (Apis mellifera). But today the Sahara is inhospitable to honeybees, which can’t survive in the large sand deserts that lack any vegetation. However they have survived in many oases that litter the desert and are maintained by local beekeepers that keep the insects for honey production and to pollinate oasis plants.

There are also some wild populations of bees that have survived. One such group lives at the desert oasis at Kufra in southeast Libya, while another lives at an oasis at Brak to the west of the country. Dr Taher Shaibi of the Al-Fatah University in Tripoli, Libya and Professor Robin Moritz of Martin Luther University at Halle-Wittenberg, Germany showed that the Kufra bees have remained isolated from all others for at least 5,000 years and perhaps up to 10,000 years, since the moment they were cut off by the creation of the Sahara desert. The bees are not suffering any ill effects, caused by inbreeding, from their isolation (study).

The sahariensis bees are a subspecies of honeybee (Apis mellifera) belonging to the African lineage, native to the oases of the Sahara to the south of the Atlas Mountains. They are yellowish-reddish, but there are color variations between regions: at the oases and wadis along the northern edge of the Sahara in Morocco the bees are yellowish and in the East, in the Algerian sector they are blackish.

The sahariensis are closely related to Apis mellifera intermissain, which are black and mostly found along the Mediterranean coast.

What is Sahara honey

Sahara honey is a multifloral honey, produced from mostly medicinal plants. The botanic flora of Sahara is known in Algeria for its medicinal uses, and thus it was concluded that the higher potency of the Sahara honey is most probably due to antibacterial substances in its plant derivates.

A great number of research studies focused on the pharmacological and biological properties present in honey, including anti-inflammatory, antioxidative, antibacterial and antifungal activities, among others. According to these studies, the color of Sahara honey can vary a great deal, from ale yellow to dark brown.
Also a characteristic less expected was its very small amounts of polyphenols contents.
Almost all research evaluated Sahara honey antimicrobial power.

• A recent study conducted by Ahmed et al. andpublished in 2016, evaluated the antimicrobial efficacy of Sahara honeys against urogenital pathogenic C. albicans and P. mirabilis and compared it to that of manuka honey UMF15+. The results showed comparable figures and concluded that all samples of tested Sahara honey possessed favorable antimicrobial against urogenital microorganisms.

The researchers also concluded that the efficacy of honey in inhibiting fungal and bacterial strains could be attributed not only to its floral sources, and concentration, but also its physicochemical properties. Further studies should be conducted to determine which are the active constituents of Sahara honey.

• In another study, from 2012, conducted by Abdelmelek Meslem from Algeria, the antibacterial tests using two bacteria, Staphylococcus aureus and Pseudomonas aeruginosa were moderately sensitive to honey samples. There was no correlation between antibacterial activity and total phenolic contents.

• In a 2007 study Boukraâ and Niar, from the University of Tiaret, Algeria, conducted a comparative study to set out that the antibacterial potency of Sahara honey is much higher compared to that of other Algerian honeys and assumed that this was more likely due to its phenolic and flavonoid compounds. Their findings suggest that Sahara honey could be used for managing wounds and burns, which are mostly infected by P. aeruginosa.

Medicinal plants of the arid zones, Published in 1960 by the United Nations Educational, Scientific and Cultural Organization

Sand dunes of Wan Caza in the Sahara desert region of Fezzan in Libya credit I, Luca Galuzzi via wikimedia commons;

2 thoughts on “What is Sahara honey? Good antimicrobial honey produced in the Saharan oases.”