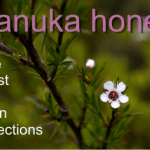 Coming from Kunzea ericoides, also known as white tea-tree or scrub, is a tree that grows only in Australia and New Zealand. Until 1983, Kanuka was considered to belong to genus Leptospermum, like manuka tree. But now we only consider it like its cousin. The differences are really hard to notice, even some beekeepers fail to recognize them. Their flowers have a similar morphology and pollen differentiation between the two species is very difficult. Apparently the easiest way to tell the difference is to feel the… Read More