What is carob honey? A powerful antioxidant chocolate treat! 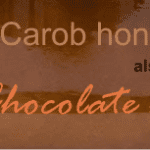 Carob powder is known as the substitute of cocoa. But while there is no “cocoa honey” made by bees (though there is a product called “cocoa honey” used for the liquid portion of cocoa pulp that is released from the fruit soon after it is cut open and can be used before fermentation by simple extraction due to its nutritional characteristics.), there is carob honey, an exquisite monofloral honey. Also known as “chocolate honey”. Scientific name: Ceratonia siliqua Other names: carob (from Arabic خَرُّوبٌ (kharrūb) and Hebrew חרוב‬ (haruv)) tree, St John’s bread, locust… Read More