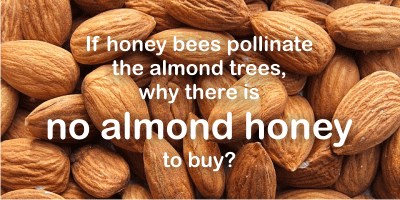 Almond honey is one type of honey that is not intended for human consumption.

Almond honey is sweet with a strong nutty aftertaste according to some people, while others say it’s bitter and nasty. A bad honey.

That’s intriguing because it comes from the the nectar of almond flowers and we all love almonds (except whose with allergy to them, of course).

Name: Almond tree
Scientific name: Amygdalus communis L. (Rosaceae), a synonym of Prunus dulcis  and Prunus amygdalus. A species of Prunus belonging to the subfamily Prunoideae of the family Rosaceae.
Distribution: Native to the Mediterranean climate region of the Middle East, from Syria and Turkey eastward to Pakistan (with warm, dry summers and mild, wet winters.). It was spread long the shores of the Mediterranean into northern Africa and southern Europe and other parts of the world, notably California, which is the largest US producer of this nut.

Main characteristics:
The almond is a deciduous tree (not evergreen), growing 4–10 m (13–33 ft) in height, with a trunk of up to 30 cm (12 in) in diameter. The young twigs are green at first, becoming purplish where exposed to sunlight, then grey in their second year. 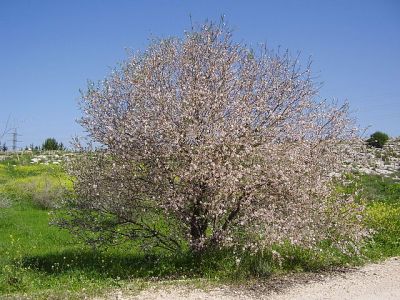 The flowers are white to pale pink, 3–5 cm (1–2 in) diameter with five petals, produced singly or in pairs and appearing before the leaves in early spring.
The almond ﬂower is entomophylic; its fragrant petals attract insects, especially honey bees, with nectar located at a depth suitable for the proboscis length of the honeybee, and pollen that can be easily collected (Faegri andvan der Pijl 1979).

Honeybees are the most eﬃcient pollinators of almonds, but compared to other ﬂower species, the ability of almond ﬂowers to attract honeybees is low. It may be that when ﬂoral nectar resources are scarce, bees have no alternative but to collect their food even from almond ﬂowers. However, when other species start to bloom, bees will prefer to visit them and will neglect the almond ﬂowers.

To have a very good crop of almond nuts, pollination should be very efficient. This is why growers usually bring a high concentration of bees in a single orchard. Their aim is to completely strip all flowers of new pollen each day. This promotes maximum pollination and creates a heavier crop of nuts. But unfortunately, too many honey bees make too little honey, from an already scarce nectar. Yet the focus in not on producing honey but in pollinating, so beekeepers sometimes even supplement the hives with additional food.

California beekeepers represent 500,000-600,000 hives, but the demand for beehives in the almonds is about 2.4 million hives. If an almond grower doesn’t have honeybees he would probably get 400 pounds per acre. With honeybees, he could get 4,000 pounds per acre. The benefit of having the pollinators in the field is definitely worth the trouble.

The reason for which honey bees do not prefer almond nectar, it that it contains amygdalin. Studies have shown that amygdalin deters bees, which are able to distinguish among various concentrations of amygdalin, thus showing the preference for other flowers, such as white mustard ﬂowers. The level of amygdalin in the nectar are below the lethal threshold for honey bees, as there were not detected unusual levels of bee mortality. It was concluded that they can tolerate the toxicity of amygdalin, up to a certain level. Yet, this quantity is letal for small animals.

Scientists proposed 2 reasons for the presence of this toxin in the nectar:
1. it repulses non-expert pollinators, but gives access to the experts that have built up resistance to the toxin while providing efficient pollination services for the plant:
2. the nectar toxin prevents inhabitation of bacteria that could spoil the nectar’s quality and harm its appeal for honey bees.

The quantity of amygdalin in nectar depends on the time of the year. In early summer honey bees forage almond flowers with lower amygdalin content – mostly because there are other floral alternaties, while in midsummer they forage even the flowers with high amygdalin concentration, because of the much poorer floral resources.

The nectar is less than pollen, with variable sugar concentration, composed exclusively of glucose and fructose. Nevertheless, it is considered to be in the range consumed by honey bees (Baker and Baker 1983b). In three almond cultivars studied by Orosz-Kovacs et al. in 2000, it was found that the nectar contained glucose and fructose in a 1:1 ratio, and did not contain any sucrose. A composition typical for nut fruits that bloom early in the spring.

The Mem-Dalet almond cultivar was found to be the most attractive cultivar to honeybees (Lon-don, 2001) due to a higher sugar concentration. Although it is considered that there are other speciﬁc constituents of nectars, such asphenols and alkaloids, that can inﬂuence the preferences of honey bees. (Walleretal.1972)

The nectar contains amygdalin at a concentration of 2.5-10 milligrams per liter. The almond tree is the only plant to have this toxin in its flowers’ nectar. For small mammals this is a deadly substance. Amygdalin is highly concentrated in the seeds of unripe wild bitter almonds, these almonds being dangerous for human consumption.

A group of researchers, headed by Prof. Ido Izhaki along with Prof. Gidi Ne’eman, Prof. Moshe Inbar and Dr. Natarajan Singaravelan, investigated why it is that this plant produces such a potent toxin (a by-product of which is cyanide) in its nectar. It is  incompatible with the nectar’s purpose of attracting insects to the flower to extract food and pollinate it and thereby contribute to the plant’s reproduction.

The pollen was found to have a much higher concentration of amygdalin: 1,889 ppm on average. The nectar has a lower concentration, believed to have been formed from the pollen grains fallen into it.

The fruit measures 3.5–6 cm long. It is not a nut, but a drupe, consisting of an outer hull and a hard shell with the seed. Almonds are sold shelled (with the shell removed) or unshelled.
The white almond we find on the market have bee blanched. This means they had the shell removed and then treated with hot water to soften the seed coat, which is then removed to reveal the white embryo.

Amygdalin is a toxin, a cyanogenic glycoside responsible for the toxicity of the seeds of many species of Rosaceae, such as bitter almonds, peaches and apricots.
Sweet almonds are low in amygdalin as a result of breeding processes. Their use in marzipan is common but the preparation procedure should eliminate most of the cyanide.

Cyanide is a by-product of amygdalin, and can be lethal to humans. The acute dose is of 1 mg/kg body weight. Cases of acute poisoning have been associated with misuse, particularly of preparations from apricot pits, bitter almonds and cyanide rich apple seeds.

The good new is that cyanide is detoxified in the body, by “the enzyme rhodanese in the presence of sulphurcontaining amino acids, to produce thiocyanate. Goitre and cretinism due to iodine deficiency can be exacerbated by chronic consumption of insufficiently processed cassava. The detoxification product of cyanide, thiocyanate, is a similar size to the iodine molecule and interferes with iodine uptake by the thyroid, effectively increasing the dietary requirement for iodine. The effect is only seen in iodine deficient population and can be reversed by iodine supplementation.”

In New Zealand there are two known reports of cyanide poisoning from consumption of apricot kernels. In one case a woman consumed 60 ground apricot kernels mixed with orange juice (Atkinson, 2006). In the other case, reported by Waikato hospital (Tebbutt, 2001), 30 apricot kernels containing 3 mg cyanide/g kernel caused a significant poisoning.

So, for the all vegetarians, vegans and healthy-eating enthusiasts, beware of apricot kernels, they are toxic.

Yet, do not worry about the amygdalin content in the sweet almonds we found on the market. Food processing procedures such as soaking, fermentation or drying will reduce the levels of hydrogen cyanide before consumption through the action of plant enzymes and subsequent leaching.
Processes such as grating, soaking, fermentation and storage will allow time for conversion of cyanogenic glycosides to cyanide, while exposure to air or water will allow the cyanide to dissipate out of the food matrix.  (source)

What is almond honey?

Almond honey is a bad honey. An intriguing one anyway, scarce and with no special health benefits. California produces most of the nut production in the world, that’s why you would expect to have here large quantities of almond honey. Nevertheless this is not the reality.

Color: light amber
Taste: a slight taste of almond but with strong a nutty aftertaste.
Sweetness: not very sweet, sometimes not sweet at all.
Some people say it is pretty good, yet others say it bad for humans and it should be left for the bees to eat.  Specialists say that when honey bees collected nectar from other flowers as well, this honey becomes eatable, if it was made only from the nectar of the almond flowers, then it is not good at all.
Toxicity: the quantity of amygdalin in honey is very low, lower than in the pure nectar.

Here’s what a beekeeper says on a honey forum:

“The honey tastes TERRIBLE! I had to spit it out it was so bad. Very bitter, not the expected sweet flavor. I crushed and strained a small jar just so a few of my friends could share my experience. My girlfriend said it tasted like burnt caramel. Others got this weird look on their face, kind of like the one a person makes when expecting something sweet, and it’s sour instead.”

Almond honey is not the only bad honey we had. There is another honey with a much worse taste, yet consumed for its amazing health properties: Strawberry tree honey, aka Arbutus honey.

Where can I find almond honey?

https://www.naturesshop.co.uk/ sells almond honey harvested from the village of Los Veléz of Almería Province in Spain. They say the honey is light but very sweet with a hint of vanilla and a nutty aftertaste. Go try it, don’t believe them!
What I have found interesting is that they also sell arbutus honey (aka strawberry tree honey), which is even scarcer than almond honey! Not to mention the bitterness. But yes, this kind of honey is probably unbeatable when it comes to health benefits!

The world’s largest controlled pollination takes place in California every February. Honey bees are deployed extensively for almond pollination, yet beekeepers are advised to reduce a prolonged reliance on almond, as it can be detrimental to honey bees’ health. The risk comes not from the nectar, but from the pollen, which can be  toxic if exclusively consumed by honey bees for much more than a week.

For reasons yet not completely understood, the number of bees decreases in the world. A phenomenon known as Colony Collapse Disorder. The disappearance does not applies only to bees, but to all insects. In California there are enormous almond groves that without bees will not produce fruit. And because the bees are less and less, farmers import honeys from everywhere to ensure pollination.

So when it comes to almonds, though honey bees are heavily brought to pollinate the flowers, honey is not produced. It’s scarce, not very tasteful and with no specific health benefits. That’s why we don’t have almond honey on the market.

I could not find any online shop that would sell it. Only raw honey infused with blanched almonds. But we can do it at home, and save the money.

5 thoughts on “What is almond honey? And where is it?”