Ikaria honey or What is the secret for a long life? 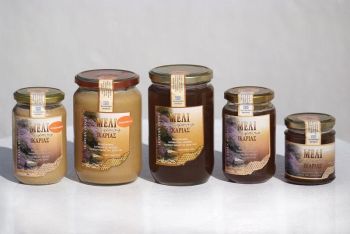 Greeks seem to know what is the secret for a long life! Ikaria honey. And coffee. And tea. Long naps. And wine. 🙂

Ikaria has become a really intriguing island. It is one of the few places in the world where people live longer than the rest of us. If we ask them how they do it, they will say that it’s the air, or the sun, the wine or the tea. Some scientists say it’s because of the coffee, and others say it’s in the honey. Everything seems to be special on this island.

It was called “The Greek ancient healing island”, Ikaria, aka Icaria, it’s only a small mountainous island, of 99-square miles in size, located in the Eastern Aegean Sea, at about 30 miles off the western coast of Turkey. Its name is derived from Icarus, son of Daedalus from the Greek mythology, who was trying to escape from Crete with the help of some wings made of features and wax. But he flew too close to the sun and the wax melted. He fell into the sea nearby the island that took his name.

What is Ikaria honey? It is a honey made from many plants: from pine trees, herbs and a variety of native flora species found on the island. Among them there are White Heather Tree, Greek Strawberry Tree, Wild Lavender, Akoniza, Pine Tree, Thyme, and Wild Oregano.
All these plants and trees hold incredible good health benefits, the Ikarians using them for tea as well. Some say the secret of their longevity is exactly in this tea.

The pollen and nectar collected by the bees is 100% pure and free from any chemicals or pesticides/herbicides, normally found in commercial or private farming. There is no industrialization or large commercial enterprise on the island which would normally produce pollutants. No need for pesticides or fertilizers. Every plant here grows naturally and wild. The trees blossom in spring and also in autumn, assuring sustenance for the bees throughout the year. No man help is needed.

The honey is medium to dark brown (particularly due to pine trees). It has a unique, rich flavor that makes it different from other honeys. It is believed to have anti-cancer, anti-inflammatory and antibacterial properties.

It is difficult to find it though, exactly because the island is not updated with our new technology. With the exception of ikariahoney.com, I couldn’t find any other online place to buy from. I think we should simply pay them a visit if we want to try some genuine Ikaria honey.

What’s so special about this island? Grigoris Tsahas, 99 years old, one of the residents of Ikaria, picture credit Andrea Frazzetta/LUZphoto for The New York Times;

They live long! Really long. Longer than the rest of us!
• They are reaching the age of 90 at two and a half time the rate Americans do.
0.1 percent of Europeans live beyond the age of 90. On Ikaria, this figure is one percent.

• They are also living about 8 to 10 years longer before succumbing to cancers and cardiovascular disease.

• They suffer less depression and about a quarter the rate of dementia. About one-third of Ikaria’s population are 90 and older and there is virtually no Alzheimer’s disease or other dementia. In the United States more than 40 percent of people over 90 suffer some form of this devastating ailment.

• Comparing to US, there are:
– 20 percent fewer cases of cancer,
– half the rate of heart disease,
– one-ninth the rate of diabetes,

All this info were gathered by Dan Buettner.

In 2009, he brought a research team of doctors and scientists to Ikaria, sponsored by BBC, National Geographic, and AARP to find why the Ikarians live so long. He named Ikaria one of the 5 “Blue Zones” in the world for longevity. New York Times had an eight page article on the wonders of Ikaria and National Geographic featured Ikaria in the November/December 2012 issue.
Dan Buettner also wrote the amazing book describing the life on Ikaria, (among the other 4 blue zones of our planet, places where people live the longest): The Blue Zones: Lessons for Living Longer From the People Who’ve Lived the Longest

From the same herbs and trees honey is made, the Ikarians make their TEA. People on Ikaria drink their tea at the end of the day. It is a cocktail made of o mixture of plants, named  “mountain tea”: wild marjoram, sage (flaskomilia), a type of mint tea (fliskouni), rosemary and a drink made from boiling dandelion leaves and a little lemon. It’s quite a medicine, though the people are simply enjoying it as a good beverage. (according to Dr. Ilias Leriadis)

Or, could it be the COFFEE?

Trying to decipher the secret of living long and healthy, the scientists from the University of Athens Medical School believe that coffee is also responsible for this.

Greek coffee, also known as Turkish coffee, is rich in polyphenols and antioxidants and contains only a moderate amount of caffeine. It is served by roasting and finely grounding coffee beans, then boiling it in a pot with sugar.
It is then served in a cup with the ground beans on the bottom, they are not filtered out, as we do with the other forms of coffee. They serve it with a glass of cold water to cleanse the pallet.

It’s not only about the diet. It’s the lifestyle that counts!

People on Ikaria live a completely different life.
• 83.7% men are still active
• 70.2%women are still active
• they drink 2-3.5 glasses of wine daily
• they drink 10oz of coffee daily
• 84% of men take a long nap daily
•67% of women take a long nap daily
(Figures from the Ikaria Study, which surveyed the island’s over-80 population)
• Go to sleep late, after midnight, only after going to taverna to socialize with friends over a cup of tea or wine.

Dr. Ilias Leriadis, one of Ikaria’s few physicians, said in 2009. On an outdoor patio at his weekend house, he set a table with Kalamata olives, hummus, heavy Ikarian bread and wine and said. “People stay up late here,” Leriadis said. “We wake up late and always take naps. I don’t even open my office until 11 a.m. because no one comes before then.”
He took a sip of his wine. “Have you noticed that no one wears a watch here? No clock is working correctly. When you invite someone to lunch, they might come at 10 a.m. or 6 p.m. We simply don’t care about the clock here.”

The New York Times has an incredible article entitled: The Island Where People Forget to Die.
Find the time and read it, you won’t regret it. It gathers around the story of Stamatis Moraitis, the Greek who left the island during war, settled in America and after years discovered he had lung cancer, with only 9 more months to live. He decided to die on his native island, Ikaria, but once he got there, he forgot to die. He died 36 years later! The details are delicious, please read the entire article.

The best method to obtain fresh Ikaria honey is to spend one incredible vacation there, and at leaving to buy directly from there. But enough to last till the next vacation. 🙂 What do you think? • A book on Ikaria: Ikaria: Lessons on Food, Life, and Longevity from the Greek Island Where People Forget to Die

• A book about the small island Ikaria, it’s inhabitants, it’s distinctly remarkable beauty, and it’s cultural life, and about how her love affair with the island has deeply affected her own life.Ikaria A Love Odyssey on a Greek Island

Other types of honey you may be interested in:

or check them all here: Types of honey

Ikaria honey or What is the secret for a long life? was last modified: November 18th, 2019 by Laura
Laura 01/07/2015
Onion and honey: a natural remedy for bacterial infection! Tualang honey. What is tualang honey?