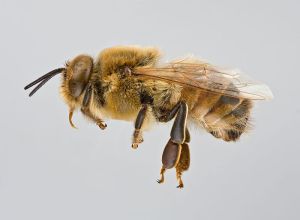 The answer to ‘what is a drone bee’ is quite simple: male bees. The bee males of the hive. The ones that ensure the perpetuation of honey bee species.

A honey bee colony is an Amazonian society. This doesn’t mean that they live along the Amazon river, but that female are just like the legendary Amazons, warriors and rulers. As ugly as it sounds, the truth is that males are here only reproduction instruments. They are born only to inseminate the queen.

What’s the life of a drone?

The drone comes from an unfertilized egg and he has half the chromosomes of a worker bee, 16 rather than 32. It means that the drone has no father but does have a grandfather, as his mother the queen was from a fertilized egg. This system of reproduction is known as parthenogenesis.

It can be said that a drone develops slower than the other bees, though its organism is not more complex than of a worker. Yet it takes a drone 24 days to become adult, 21 days to a worker and only 16 to a queen.

• At the adult stage:

While considered adults after the day 24, for the first 3 days they are not able to feed themselves. After the day 4 they will feed themselves from the honey and beebread of the hive. When they are 8 days old, they will get out of the hive, to take orientation flights, usually between 11.00 and 17.00. During these flights a drone will NOT gather nectar to feed himself. It will come back and feed food from the hive.
After the mating flight with the queen they die. If they don’t mate, they can live till autumn.

How long does a drone live?

From the day 12, when a drone reaches sexual maturity, a drone’s life can be:

1. A very short one, for another 1 or 2 days.  After reaching maturity, a drone can immediately mate with a queen. He’ll go away from his hive, and in flight, will mate with other queen (not one from his hive). Yet, only a small number of drones manages to perform this function. Any drone who successfully mates will not return to his hive, but will die as his penis and connected abdominal tissues will be ripped from his body during mating.

2. A longer life, of maximum 58 days. As not all drones mate with the queen, lots of them manage to live longer. Towards the end of summer, from July to August, when preparing for wintering, the female workers will attack them and chase them from the hive, to die outside of cold and starvation. Letting them stay would be an unnecessary drain on the colony’s winter resources.
If during the active season they had a free-pass in any other family, in autumn, no other colony will receive them. They will gather in groups and stick together on the front wall of the hive where they will shortly starve to death.

In families with no queen, or with unmated or older queens, drones are tolerated over the winter. What are the drones’ jobs?

Here is what they don’t do:
They don’t collect nectar, don’t participate in the organization or or protection of the family from intruders, don’t contribute to the production of food for the colony and don’t pollinate. These are all jobs of the workers.

Here is what they do:
Mate with a queen and thus ensure the perpetuation of the species!
Also through their presence on the comb, they contribute to the achievement of optimal thermal conditions necessary to the growth of their young, and ventilate the hive.

What does a drone do all day?

He flies. The total duration of a drone flight is on average 4 hours during peak season and 2 and a half hours to the end of the season. In late spring a drone can fly for about 24 minutes in one day, and in summer for 36 minutes, over a distance of 7 km from the home hive.

What does a drone eat?

For the first three days, after he gets out of the egg stage, he will eat royal jelly. After this he will only eat honey and beebread from inside the hive. Literary he will never gather his food, but eat the honey made by females. They will be fed by them till they are 4 days old, as adult.

Drones are the largest bees in the honey bee colony and a bigger body needs more food. That’s why drones eat three times as much food as workers, and an excessive number of drones may place an added stress on the colony’s food supply. In autumn they are kicked out of the hive, being considered unnecessary burdens.

What are the drones’ particularities?

– They are the largest bees in the hive.
– Their length is of approx. 15-18 mm, weighing between 200 and 280 mg (most commonly 230 mg)
– Their head is larger than that of either the queen or worker, with a round shape.
– The antennas have a joint in addition to those of working bees
– Their compound eyes meet at the top of their head. These larger eyes are believed to help them spot the queens during mating flights.
– They have a short proboscis, so they cannot lap the floral nectar. Instead, it allows them to receive food from worker bees (the first 4 days of life) or feed themselves with honey comb cells (at maturity).
– Drones emit a pheromone that acts as a binder in the air, during mating flight, and also attracts virgin queens in the mating areas.
– Drones have NO STINGER, no pollen baskets, no wax glands.
– Their yellow and black stripes are more vivid than of the workers and queen, probably to intimidate the enemy, because they don’t have any other means of defense.

How do we recognize a drone bee?

Sometimes we find ourselves near a bee and wonder if we should worry or not. We should if the bee is a female, and we shouldn’t if the bee is a drone, which is a male without stinger. When we see them one next to another it’s easier to tell which one is male and which female, because males are bigger than females. But outside, when only one bee lands on our hand, how can we tell?

There are some clear things that tell us which is what. First, the head of the female has a triangular shape, while the drone’s has a round shape. And the more obvious one: the eyes of the male meet on top of their head. See this in the picture below. A drone’s head is like an eyed sphere. The most important distinctive part is the stinger. Even if it’s a female bee, we cannot see the stinger. It is withdrawn in her abdomen, and it will be get out only in a sting emergency. Otherwise it’s hidden. But the form of her abdomen is quite different from a drone’s. The drone has a flat bottom, the worker has a v-shaped one. We also need to know that drones will usually be found only during late spring and summer. There are no drones in March or April, at the first blossom of the trees and flowers.

Although drones perform no useful work for the hive, their presence is believed to be important for a normal colony function, however exactly why it is not known.

We eat drone brood! What does this mean?

It means that our scientists have discovered that a drone brood, meaning a male larva, is full of nutritious elements which can be turned into a product with incredibly healthy benefits. It is called Apilarnil.

The product is made of male bees at their 7th day of existence, when they have a weight of 250-300 mg and their body contains all the elements of the main organs and all their body’s “programs” are completed. At this age, their bodies contain a HUGE number of SEX CELLS, over 10 million sperms, highly concentrated nutritive elements containing fat body protein, accumulation of lipids and carbohydrates, particularly glycogen, carbohydrates and a significant amount of haemolymph, far more rich in nutrients and energy compared to other insect or animal, including human blood.

It can be given at all ages, from infants to really old people. It has a higher efficiency in combination with other nutritional supplement, such as royal jelly, honey, pollen, flax seed oil or spirulina by enhancing each other’s properties. Read the article Apilarnil, the bee brood, to find out what is this product good for. And please come back here and tell us if you have been already using it. 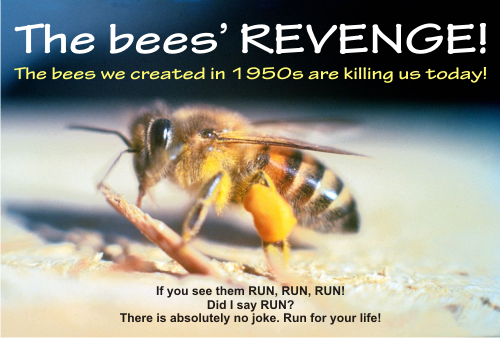 How big is the danger of killer bees? Will they invade the whole planet? 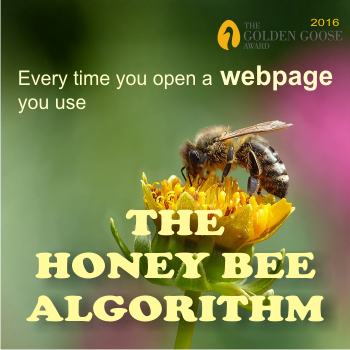 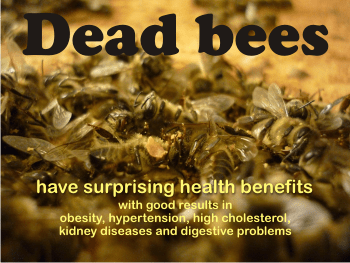 One thought on “What is a drone bee?”