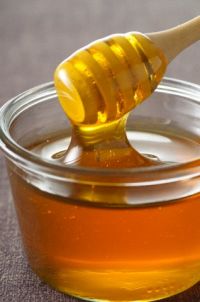 Honey is a sweet food made by bees from the flowers’ nectar or honeydew droplets. It is the only food that includes all the substances necessary to sustain life, including enzymes, vitamins, minerals, and water and even more, it’s the only food that contains pinocembrin, an antioxidant associated with improved brain functioning.
Honey is also the only food that doesn’t spoil. It was found in Tutankhamun’s tomb, ans it was still edible. It crystallizes in couple of months after harvest, but this is a natural process and it doesn’t alter its properties.

Honey bees collect the nectar from blossoms and put it in their special stomach. On the way back to the hive, they add invertase, an enzyme synthesized by the body of bee, and other digestive acids. They ingest and regurgitate the nectar many times, until it is partially digested.  The bees work together as a group, and do the regurgitation and digestion until the product reaches a certain quality. Then the bees store the honey in honeycomb cells and left them unsealed.

The resulted honey is still very high in water and natural yeasts, but the bees don’t let it to ferment. They fan their wings and create a strong draft across the honeycomb, which enhances evaporation of water from the nectar. This evaporation raises the sugar concentration and prevents fermentation. The honeycomb cells are then sealed.

The bees produce honey as a food and energy source during winter or cold weather when fresh food is hard to find. Beekeepers harvest the honey in autumn, leaving enough for bees to survive during winter.

On short, this is how is done:

The most synchronized and synergetic society, the bees are the musketeers of the hive, they are “all for one and one for all”!  It’s a feminist society as most of the colony is made of females. The hive gathers three types of bees: The queen mates with several males, only once, and after that they are able to lay 2000 eggs daily.  They can be fertilized eggs which will turn into worker bees unable to reproduce, and unfertilized eggs which will turn into males, which will be on stand-bye the whole summer, for mating a virgin queen, and then dying (with dignity!).  The others are simply expelled from the hive during winter. And they don’t even possess a stinger.  Quite Amazons those ladies!

Organic acids comprise most of the acids in honey, accounting for 0.17–1.17% of the mixture. Gluconic acid is the most prevalent. The other organic acids are in minor concentration: formic, acetic, butyric, citric, lactic, malic, pyroglutamic, propionic, valeric, capronic, palmitic, and succinic, and many others. The amino acids are up to 18 (of the 20) and
are derived almost solely from the bodies of the bees. However, amino acid content is almost negligible in honey, only 0.05–0.1% of the composition. The main amino acid is proline.

Endospores:  Honey is antimicrobial in its “natural’ state. It’s about 17% water and the sugars chemically tie up the moisture, keeping wild yeast and bacteria from using it. Without ready-to-use moisture, the spores of yeast remain dormant, and an adult digestive system will not have any kind of problem. Nevertheless infants have an immature intestinal track and cannot face the endospores of the bacterium Clostridium botulinum which can lead to illness and even death. This is the reason infants should not be given honey.  The composition of honey depends a lot on the flowers the bees visit to produced it.
There are many types of honey, classified after different parameters.

Is honey sweeter than sugar?

There are 14 sugars in honey. One of them is called Melazitose. It does not come from honey bees or plants. Aphids use their tongues to pierce plants to bring up the sweet sap and ingest the liquid. Ants carry off the feces. Honey bees also use the feces to make what is known as Honeydew. While Americans are not very familiar with this type of honey, Germans love honeydew honey more than any other.

One tablespoon of honey weighs 21 grams and has approximately 17 grams carbohydrates and 64 calories (kcal).

DO you want to know how honey is made? Watch this video.