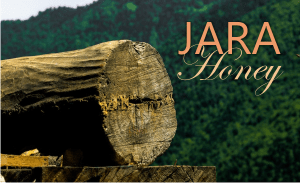 Jara honey, not jarrah honey, comes from Georgia. But neither the word “jara”, nor “Georgia”, are what you would expect.

Jara does not refer to a type of flower from which honey is produced, nor to the type of bee that produces it (like in the case of kelulut honey, which refer to the tiny stingless bees usually met in the Philippines and Malaysia). Jara is the name of the hive, the name of bees’ home.

Georgia does not refer to the state of Georgia, from the US. It refers to the country found on the Black Sea shore, at the crossroads of Eastern Europe and Western Asia, neighbored to the north by Russia, to the south by Turkey and Armenia, and to the southeast by Azerbaijan.
Previously called Georgian Soviet Socialist Republic, while part of the communist Soviet Union, until 1991.

Jara honey is mainly found in Adjara, a region found in Western Georgia, having 121 km coastline, forested green hills and mountains that reach over 3,000 meters in height.
It’s a beautiful region, divided into mountainous and maritime. There are dozens of mineral water springs, deep river gorges, breathtaking waterfalls and charming remote villages. The Adjaran coast is known as Georgia’s riviera, known for the country’s most beautiful beaches and seaside resorts.

What is special at jara honey?

– It is not produced in hives, but in hollowed logs called jara [dʒara], placed deep in the forest and up in the trees, to be protected from bears. An old traditional way kept alive even today.

– It is wild, multifloral. This means it is not produced out of a single flower. It is  the same case as in meadow honey (in lowlands) or forest honey (at high altitudes).

– It is harvested only once per year, which makes is more qualitative. The honey is well matured and full of nutrients coming from trees and flowers that cover 3 seasons.

– It is organic. The nectar/honeydew comes from forests and wild plants, away from any chemicals/pesticides usually used on crops.

Apart from the initial work of preparing the log for bees and placing it up in the trees (and bringing a bee swarm inside of it), a beekeeper does not do anything else. We cannot even call him a beekeeper, as he actually forgets about the jara (hive) until he climbs up in the tree to harvest the honey. (more like a honey hunter, harvesting Red Honey – aka mad honey from Nepal.) No antibiotics to treat sick bees, no chemicals to kill bees’ parasites, no paints for the hive, no synthetic wax. All natural.

read more about what organic honey is.

What is the nectar source of jara honey?

Being polifloral, jara honey may contain nectar from the flowers of both trees and plants, but also honeydew, abundantly found in a forest. While it is hard to detect the last one, pollen grains can be detected using a special test. A 2019 pollen analysis found pollen from the following sources: chestnut (Castanea sativa), Rubus species (mainly Raspberries and himbeer), Prunus species, Erica ( heather), clover (Trifolium), white clover (Trifolium repens), linden (Tilia), dogwood (Cornus spec.), Umbellifers (Apiaceae – the family of celery, carrot or parsley) and other unidentified pollen types.
That jara honey was classified as being honeydew honey (aka forest honey) according to current EC Directive for honey. 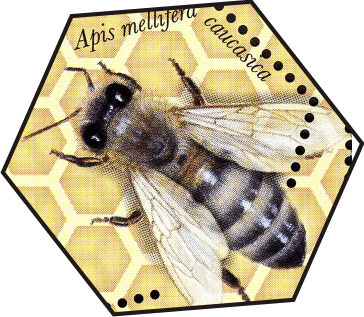 The Caucasian honey bee originates from the high valleys of the Central Caucasus. Georgia is the “central homeland” for this subspecies, although the bees can also be found in eastern Turkey, Armenia and Azerbaijan.

Characteristics:
– similar to Apis Mellifera Carnica (aka Carniolan honey bee), in shape and size, but less common than the Carniolan and Italian races of the Western Honey Bee.
– have black and gray stripes, not yellow and black as we know common bees, and are covered by lead-gray hair. Drones (male bees) have dark hair and queens are dark and hard to find;
– have the longest tongue (proboscis) of all the Mellifera species, up to 7.2 mm. This is a feature that makes them capable of gathering nectar from the deepest nectar tissues, where no other species can and to forage for a longer season;
– are very gentle and calm on the comb. However, once agitated, they take a long time to settle down;
– are great producers of honey and propolis. In its native area they produce honey better than the European dark bee;
– have a low swarm tendency, due to their slow start up, which makes over crowding rarely a problem.
– store honey near the brood, typical for a mountain bee, using a minimum number of combs for storing it; in other words, it doesn’t proceed to a new comb until the previous one is completely filled. The advantage is that at the end of the harvesting there won’t be half or partially filled combs, a great advantage for capping and extracting the honey. This characteristic of the Caucasian bee recommends it as a great choice for regions with a colder, rainy or constantly changing weather.

In Georgia, there was a time when one bee family used to live for more than 16 years!

Here are the downsides of this species:
– their spring development is slower than the other subspecies but they raise strong colonies reaching full strength in mid-summer and produce much honey. This is an undesirable trait for areas with high nectar flow in spring;
– are very great producers of propolis, some quite excessive, and this makes hive management more difficult, as frames and hive boxes are glued together;
– are not very suitable for colder climates, as they have a lower resistance to Nosema Apis (than the other subspecies) and don’t winter well;
– they are inclined to drifting and robbing the weak colonies.

– Caucasian bees are smart bees. “I am a math teacher and it was fascinating to me to see how precise bees are. For example, I discovered that when the bee family is strong, it builds honeycombs vertically in the Jara, and when it is relatively weak, then the combs are horizontal, this is how they are keeping the temperature level” – says GENADI GOGITIDZE, 45 yo, Dghvani, Georgia.

– Caucasian bees attach to their owner. “Most of the bees left the Jaras after my grandfather passed away, which was very strange coincidence, because my grandfather was near the bees all the time and it is possible that bees felt something”, notes Kako TURMANIDZE, 44 yo from Silibauri, Georgia.

A traditional bee hive made inside of the trunk of a cut tree, usually linden.
Local folktales say that ancient inhabitants of those places found the bees in a tree hollow and call it the bee tree. Later on, locals understood that these bee trees could be replicated. 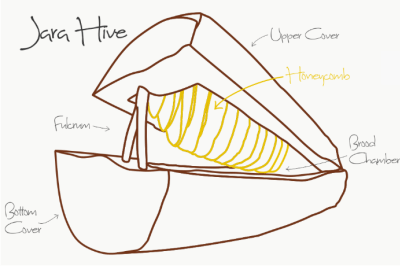 Jara is usually made from linden tree (Tilia begoniifolia), as it has a pleasant smell and the wood is lighter and easy to work with.
The wood is cut in the forest and roughly processed into long logs ranging from 70 to 120 cm.

At home, the head of the family splits the log in two and makes hollows in both halves. A collected swarm of wild bees is then captured and settled inside the hive. The log is placed up in a tree, in the forest, to protect it from bears. There are no wooden frames inside of it, the bees will make the honey combs by themselves. Such wooden logs are called Jara. 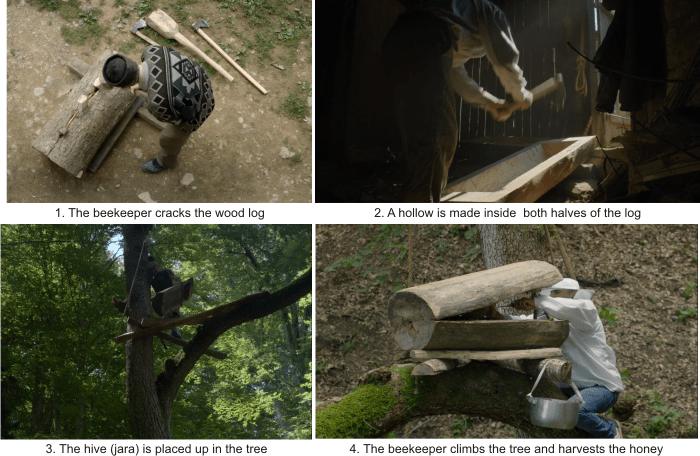 “The first Wednesday of February is the perfect time to cut the wood for the Jara!”  – this is what Daniel Tavdgiridze, 44 yo from Kviakhidzeebi, learnt from his father. He says that the Jara will be strongest! And he would go 5 or 6 km into the forest to find the tree and work with it there.

Where are the jara hives placed?
– in trees, in the middle of the forest, 4-5 km walk from the village, high up in a linden tree to protect the hive from bears and other wild animals;
– wooden supports on cliff faces, at about 1200 meters above sea level, the safes places but also the most difficult for harvesting;
– in specially built wooden shelters, in higher mountainous places, where beekeepers live, protecting the Jara hives from severe winter conditions;
– in the garden near people’s homes, easier to attend these days. Sometimes the jara are placed even up on the house. 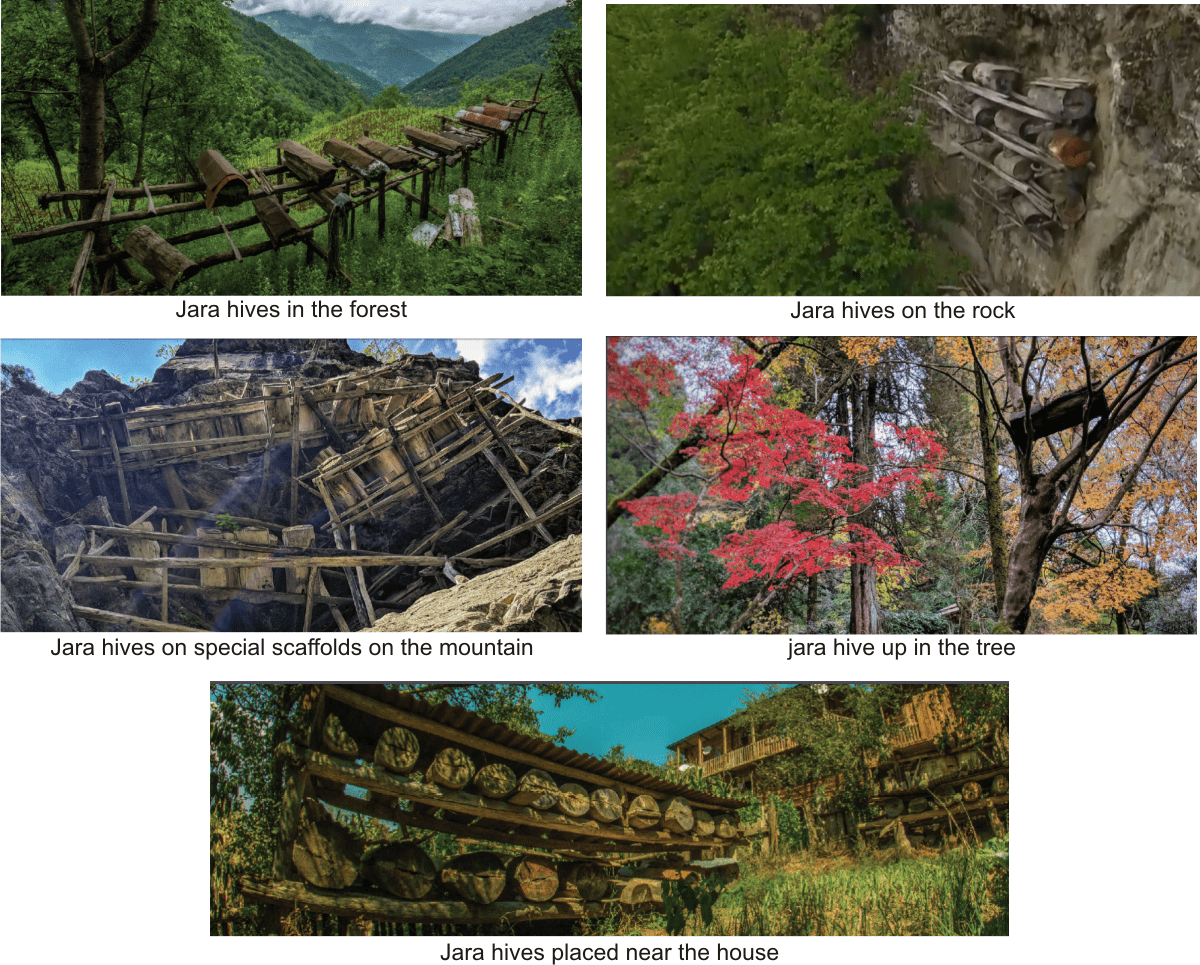 Jara honey harvesting happens only once per year, in autumn. The beekeeper will never take more than half of the honey found inside of a jara, leaving the other half for the bees, so they can survive the winter. On average, one Jara beehive can produce up to 19 kg of honey in a season. 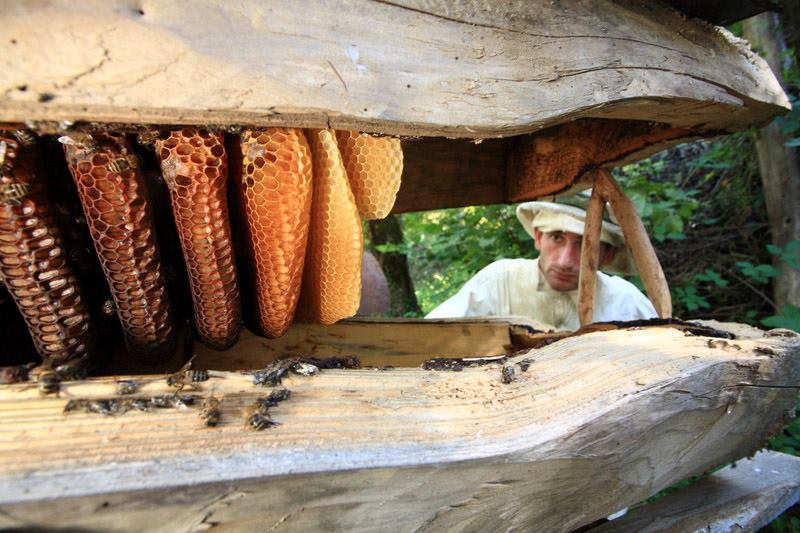 How is jara honey? 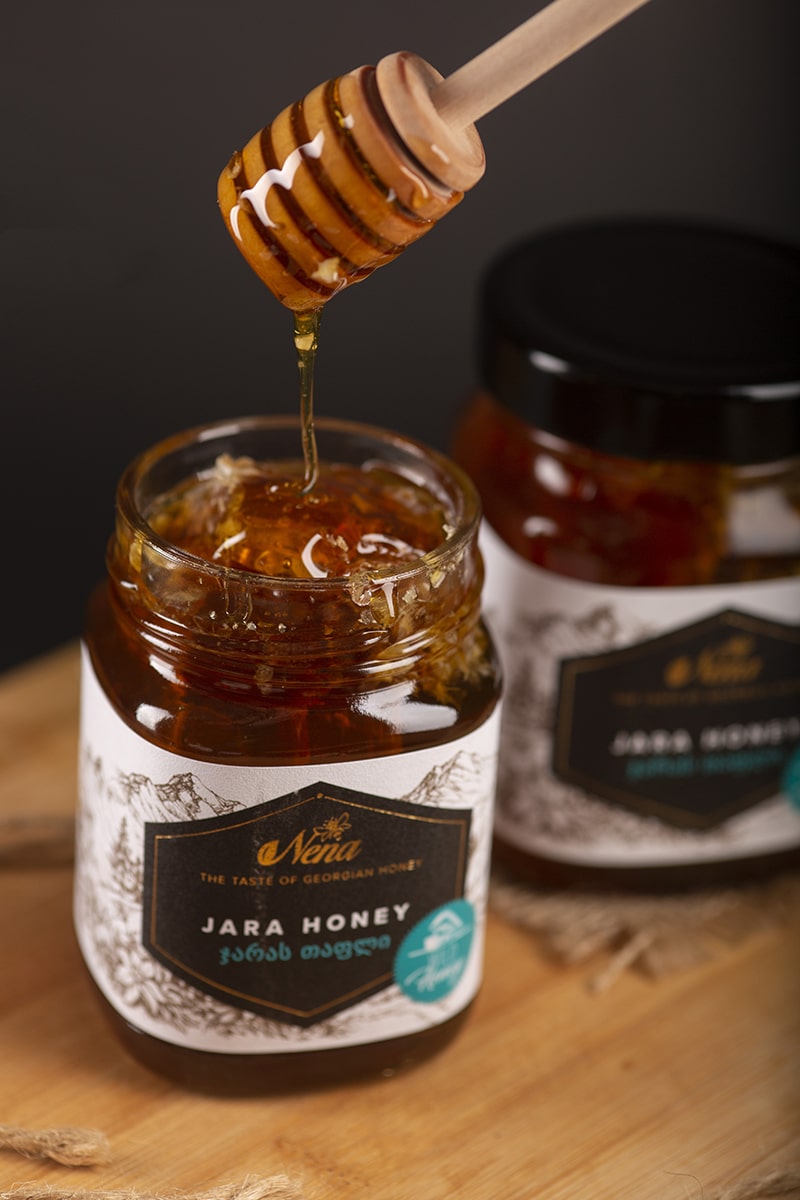 Recently producing honey in Jara hives was officially granted with the Intangible Cultural Heritage status, awarded by the National Agency for Cultural Heritage Preservation of Georgia. It is a tremendous achievement and a important national recognition for Jara beekeeping.

Where can I buy jara honey from?

Jara honey is usually sold in combs, but the stocks are not big. There are only a ten dozen of beekeepers who continue this difficult ancient tradition. However, you can find jara honey sold in 350 g or 520 g jars or in wooden packages, on nena.ge, along with other types of honey produced in the area.
That is a presentation website, not a regular online shop, but they do ship internationally. Send them a message at export@nena.ge or info@nena.ge. And come back soon because the online shop will be ready in no time.

A museum of nature, as it is often called, Adjara is one of the 34 biodiversity hot spots in the world, determined according to the importance of the biodiversity and its danger of extinction. This means that these spots are particularly biologically rich, but at the same time particularly endangered.
Machakhela, Mtirala and Kolkheti National Parks, as well as Kintrishi and Kobuleti protected areas, will be included in the list of UNESCO World Heritage Sites, as announced by the Agency of Protected Areas of Georgia.

The peculiarities of Adjaran flora is due to the fact that during the glacial age, Colchis became a heaven for the most ancient relict plants. The flora of Adjara comprises around 1,700 species of plants, with 41 of them entered in the Red book of Georgia. More than 60% of the woods are located at 1,000 m above the sea level.

At present there are 1837 plant species in the flora of Adjara (72 of which contain essential oils), distributed in 22 families and in 52 genera. Plants containing essential oil belong to: Lamiaceae – 18 species, Asteraceae-17 types, Apiaceae – 9, Cupressaceae-3, Pinaceae-3, Myrtaceae-3. Vital forms are 7 species of trees, 5 species of bushes, 1 species of tree or bushes, 49 species of perennial grass, 6 species of annual grass. Most of these plants are used as medicinal plants.

Here is a documentary from 2017, that will give you a pretty good idea of what traditional jara beekeeping is like in Georgia.

2 thoughts on “What is Jara Honey from Georgia?”