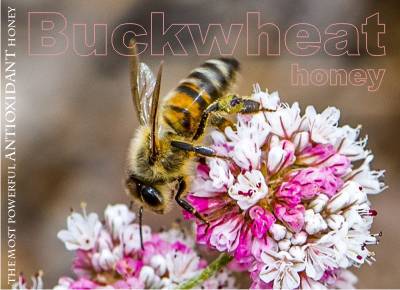 We all know buckwheat. Not from its latin name, Fagopyrum esculentum, but from its lack of gluten and various uses in our cuisine. We know it as grain-like seeds. But buckwheat flowers are also very important because from their pollen we have the most powerful antioxidant honey.

There are other well-known related species: Fagopyrum tataricum, cultivated as a grain in the Himalayas, or Fagopyrum acutatum, also known as Japanese buckwheat and silverhull buckwheat.

Buckwheat is not related to wheat, as it is not a grass. It is related to sorrel, knotweed, and rhubarb. It is not a cereal, but a pseudocereal, because its seeds are rich in carbohydrates. And it incorporates the name “wheat” but it has nothing to do with wheat. It doesn’t have gluten, which is probably why it is so very popular and well-known.

The name “buckwheat” (or beech wheat) comes from its triangular seeds, which resemble the much larger seeds of the beech nut from the beech tree, and the fact that it is used like wheat. The etymology of the word remains unknown.

According to wikipedia, in a 100 gram serving providing 343 calories dry and 92 calories cooked, buckwheat is a rich source (20% or more of the Daily Value, DV) of protein, dietary fiber, four B vitamins and several dietary minerals, with content especially high (47 to 65% DV) in niacin, magnesium, manganese and phosphorus (table). Buckwheat is 72% carbohydrates, including 10% dietary fiber, 3% fat and 13% protein (table). Buckwheat blooms in cooler weather and is a short-season crop. The flowers are very dense, making the entire crop look like a thick carpet of flowers. Pollinators greatly increases the yield. Honeybees love its nectar and produce a a dark-colored honey.

The world’s largest producer of buckwheat nowadays is China, followed by Russia, Ukraine, and France.
In Italy, buckwheat cultivation was introduced around the 16th century but during the most recent decades cultivation of this crop has strongly declined and today it survives only in a few alpine valleys.

Buckwheat monofloral honey is mainly produced in North America (Canada and California), China, and in some countries of Europe, such as Poland, Russia, Netherlands, and Germany.

Buckwheat is a good honey plant, producing a dark, strong monofloral honey.
Sometimes this honey has a even dark purple color that looks almost black.

Buckwheat honey is slightly granular, thick, strong aroma and a distinctive full-bodied spicy-malt flavor. This is surely not a honey to be eaten by spoon from the jar, because of its strong flavor and  lingering aftertaste.
It crystallizes slow (like chestnut, or borage honeys) and is considered one of the most robust honeys.

It is rather hard to find buckwheat honey these days, because buckwheat is being planted less and less as a crop.

It has high antioxidant activity.
Generally, the darker the honey, the higher its phenolic content and its antioxidant power.
Researchers tested the influences of honey ingestion on the antioxidative capacity of plasma. The trial persons were given maize syrup or buckwheat honeys with a different antioxidant capacity in a dose of 1.5 g/kg body weight. In comparison to the sugar control honey caused an increase of both the antioxidant and the reducing serum capacity. In annother stufy, In the second study humans were given a diet supplemented with a daily honey consumption of 1.2 g/kg body weight. Honey increased the body antioxidant agents: blood vitamin C concentration by 47%, β-carotene by 3%, uric acid by 12%, and glutathione reductase by 7%. (no, honey does not contain a great quantity on vitamins, yet inside the human body has this effect. Buckwheat honeys contain from 7.36 to 18.6mg. ascorbic acid per 100 gm.)

· Natural antioxidants in honey. Do we really need antioxidant supplements?

It has antimutagenic and antitumor effects.
Researchers compared 7 different floral sources (acacia, buckwheat, fireweed, soybean, tupelo and Christmas berry) against Trp-p-1. All honeys exhibited significant inhibition of Trp-p-1 mutagenicity. Glucose and fructose were found to be similar antimutagenic as honey and were more antimutagenic than maltose and sucrose.

Buckwheat honey has been shown to inhibit MRSA, VRE, E. coli and Bacillus subtilis by extensive degradation of DNA elicited by the generation of hydrogen peroxide on exposure (Brudzynski et al, 2012).

Compared to other honeys, buckwheat honey has a very high content of catalase (36.8 DN). Read more about enzymes in honey.

A daily dose of honey raises levels of disease-fighting antioxidants in the blood.

Apitherapists recommend 1-2 teaspoons or so of buckwheat honey as the best cough ‘medicine’ known to man and child (over the age of 12 months) for coughs due to minor colds.

Where can I find Buckwheat Honey?

First of all make sure it’s raw. The super liquid honey you find on supermarkets’ shelves is only a sweet liquid that has long lost its healthy power. On Amazon I found a trustful raw buckwheat honey from Mohawk Valley Trading Company, a company which places its hives in buckwheat fields on the slopes and the surrounding area of the Central Mohawk Valley and Finger Lakes region of New York. They respect and value the quality of honey and do not process it, maintaining its health quality intact.
You can also find many other types of honey on their website. 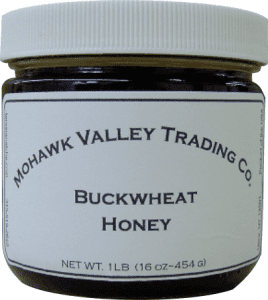 Ever heard of mead?

The best types of honey to use for an incredible mead are fireweed and alfalfa. If you are using a dark rich recipe like a maple or a black currant, a dark buckwheat honey may be the best choice. You’ll find details in the articles:

HAVE YOU FOUND WHAT YOU ARE LOOKING FOR?
if not, let Google help you out!