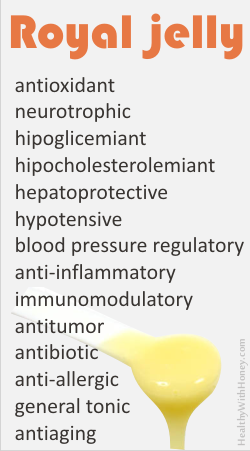 Royal jelly is one of the best natural supplements available. It is one of the most studied bee products, yet there are still unknown factors that contribute to its biochemistry and biological activity, that bring so much benefit to our health. All these have lead to a wide use in commercial medical products, health foods, and cosmetics.

It has been demonstrated that Royal jelly (RJ) possesses several pharmacological activities in vitro, in vivo in experimental animals, and also through clinical studies, including vasodilative and hypotensive activities, increase in growth rate, disinfectant action, antitumor activity, and antimicrobial, antihypercholesterolemic, and anti-inflammatory activities. Even a specific immunomodulatory action and estrogen-like effects have been reported. Royal jelly has also a potential therapeutic value in inhibiting joint destruction in rheumatoid arthritis and also has an insulin-like activity.

In this article I’ll show some studies that prove the capacity of royal jelly to lower cholesterol, normalize blood pressure and kill resistant bacteria.

Forty subjects with mild hypercholesterolemia (180-200 mg/dL) were administered nine capsules (350 mg/capsule) of RJ (or placebo/day for the control group), for three months, with one month of follow-up without any supplementation.

The study’s conclusion: “Intervention with RJ for three months considerably lowered the TC and LDL-c levels through improving the levels of DHEA-S and thus alleviates the risk of cardiovascular disease (CVD).”

The conclusion: “the intake of RJ 150 mg for three months is associated with significant improvements of the lipid profile of postmenopausal women. RJ supplementation may offer an alternative method of controlling the menopause – associated dyslipidemia.”

• The study published in 2014 Identification of a novel hypocholesterolemic protein, major royal jelly protein 1, derived from royal jelly, by Kashima Y et al., from Japan, identified the major RJ protein 1 (MRJP1), MRJP2, and MRJP3 as novel bile acid-binding proteins from RJ. “The micellar solubility of cholesterol was significantly decreased in the presence of MRJP1 compared with casein in vitro. Liver bile acids levels were significantly increased, and cholesterol 7α-hydroxylase (CYP7A1) mRNA and protein tended to increase by MRJP1 feeding compared with the control.”

• The study from 1995, Effect of royal jelly on serum lipids in experimental animals and humans with atherosclerosis., by Vittek J et al. from the New York Medical College, USA. The results showed that “RJ significantly decreased serum and liver total lipids and cholesterol levels in rats and rabbits and also retarded the formation of atheromas in the aorta of rabbits fed a hyperlipemic diet. Meta-analysis of the controlled human trials of RJ to reduce hyperlipidemia showed a significant reduction in total serum lipids and cholesterol levels and normalization of HDL and LDL as determined from decrease in beta/alpha lipoproteins.”

Their conclusion: The best available evidence suggests that RJ at approximately 50 to 100 mg per day, decreased total serum cholesterol levels by about 14%, and total serum lipids by about 10% in the group of patients studied. (Do you notice the low dosage of RJ they used?)

Their conclusion: “lyophilized royal jelly can be used in preventing and treatment of hyperlipidemia, and improving highly-coagulant status of blood.”

Honey, propolis, royal jelly and bee venom have a strong antibacterial activity. Even antibiotic-resistant strains such as epidemic strains of methicillin-resistant Staphylococcus aureus (MRSA) and Vancomycine resistant Enterococcus (VRE). Of course botanical origin plays a major role in its antibacterial activity. From all, propolis has been found to have the strongest action against bacteria, probably due to its richness in flavonoids.

The concentrations of royal jelly (10, 20, and 30%) had a total inhibitory effect against Aeromonas hydrophila (ATCC 7965).

• The study Reduction Effect of Royal Jelly and Rape Honey Alone and in Combination Against Methicillin-Resistant Staphylococcus aureus (MRSA) Strains, by Dinko Hristov Dinkov et al., published in  the Journal of Bacteriology and Virology, in March 2016, studied the effect of royal jelly, rape honey and their combination in killing the multidrug resistant and methicilin-resistant Staphylococcus aureus (MRSA) – A really scaring bacterium involved in severe and difficult to treat skin and soft tissue infections in humans.

The study researched its effect in vitro and came to the conclusion that royal jelly and rape honey mixture possessed a higher antibacterial activity than rape honey alone. The concentrations of royal jelly (20 and 30% v/v) had a total inhibitory effect against tested MRSA strains.
Royal jelly alone and in rape honey mix (RJ:RH, 1:100 w/w) have a potential as alternative therapeutics against MRSA strains, resistant for antibiotics. • A study published in January 2017, Additive Action of Royal Jelly and Honey Against Staphylococcus aureus, by Laïd Boukraâ et al., used four varieties of honey and one variety of freshly reaped royal jelly (RJ) to evaluate their additive action against Staphylococcus aureus (ATCC 29523). The study showed that the minimum inhibitory concentration (MIC) against the tested strain of the four varieties of honey, ranged between 20% and 21% (vol/vol), and that of RJ was 2% (vol/vol).

• The study Synergistic Effect of Starch and Royal Jelly Against Staphylococcus aureus and Escherichia coli, by Laïd Boukraâ et al., published in July 2009, used Strains of Staphylococcus aureus and Escherichia coli to determine the minimum inhibitory concentration (MIC) of a variety of freshly reaped royal jelly. Their findings suggest that combined mixture of RJ and starch could be used to treat infections that are resistant to conventional drugs, at a lower cost.

• The study The Lyophilization Process Maintains the Chemical and Biological Characteristics of Royal Jelly, by Andresa Piacezzi Nascimento et al, published in June 2015, carried out the chemical characterization of fresh and lyophilized RJ and investigated their antibacterial effects and evaluated the antibacterial efficacy of the main fatty acid found in RJ, the 10-hydroxy-2-decenoic acid (10H2DA). The study showed that fresh and lyophilized RJ were effective against all bacteria evaluated.
The fatty acid 10H2DA, was the one that exhibited a good antibacterial activity against Streptococcus pneumoniae.

Their conclusion: “Royal jelly may be used as an alternative and complementary treatment for infections caused by antibiotic-resistant S. pneumoniae.”

• The study Additive action of royal jelly and honey against Pseudomonas aeruginosa, by Laïd Boukraâ from the  Université Ibn Khaldoun Tiaret, published in January 2009, showed that honey and RJ deserve to receive renewed recognition as wound healers. He used four varieties of honey and one variety of freshly reaped RJ to evaluate the additive antimicrobial action against Pseudomonas aeruginosa. The results showed that when combined with RJ, each honey variety tested showed a greater than 90-percent drop in minimum inhibitory concentration.

P. aeruginosa, the most frequent isolate from the burn wound [26], also was studied. The tested strain (ATCC 27853) also was evaluated by Boukraa [5], which demonstrated the efficacy of RJ from Algeria against this bacterium. Besides P. aeruginosa, other bacteria usually isolated from the burn wound were evaluated in this study: K. pneumoniae, E. coli, and staphylococci.

Contraindications and how to take royal jelly

please see What is royal jelly good for and how to take it. 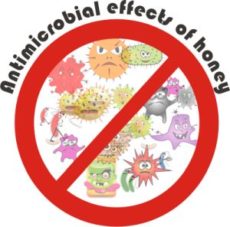 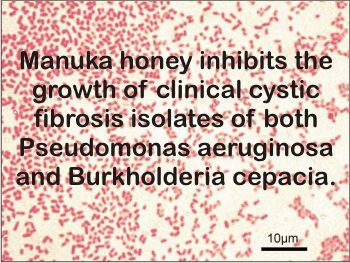 One thought on “What supplements lower cholesterol and normalize blood pressure? Have you tried royal jelly?”