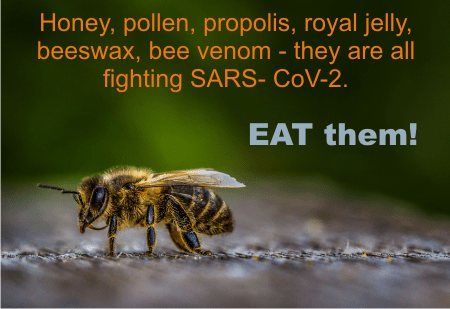 Is honey recommended in Covid-19? To prevent it at least?

Yes, it is. And not only honey, but all the other products of the honey: pollen, propolis, royal jelly, bee venom and even beeswax. They have all shown antiviral activity against pathogens that cause severe respiratory syndromes, including those caused by human coronaviruses.
And, besides directly fighting the virus, honey also stimulates the immune system and improves immunocompetence, which might reduce the severity of the novel coronavirus pneumonia.

All products of the hive have remarkable benefits to the immune system, many of them being involved in the induction of antibody production, maturation of immune cells, and stimulation of the innate and adaptive immune responses. Thus, in the absence of specific antivirals against SARS-CoV-2, apitherapy could offer a solution toward mitigating some of the risks associated with COVID-19. 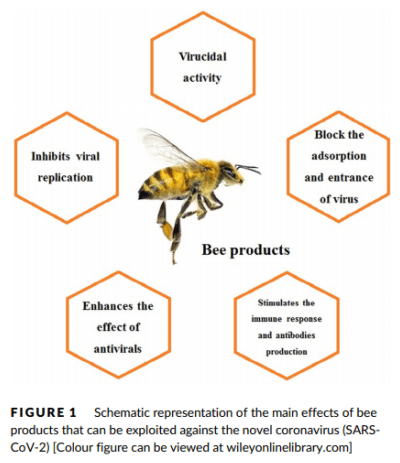 Attention! These are not mere traditional claims!

There are scientific studies today, that back up tradition.
Honey, in general, was used in traditional medicine to treat several viral respiratory diseases, such as bronchitis, throat infections, pneumonia, and flu (Samarghandian et al., 2017).

Manuka honey was shown by Watanabe, Rahmasari, Matsunaga, Haruyama, and Kobayashi, in 2014, to inhibited the viral replication of the influenza virus in vitro (IC50 3.6 ± 1.2 mg/mL) due to its virucidal effects and its synergistic interaction with the antivirals zanamivir or oseltamivir (also read Take your medicine with honey. It will enhance its power!)

It is suggested that these compounds inhibit the 3-chymotrypsin-like cysteine protease (3C-like pro) of human coronavirus Sars-CoV.

• A study reported by Babaei in 2016, says that the simple addition on 1 spoon of honey (22g) to 1 l of drinking water increased the production of antibodies against the avian influenza virus H9N2 and reduced the heterophil/lymphocyte ratio in Japanese quails.

• Clinical trials have been conducted to confirm the effect of honey against SARS-CoV-2. A phase 3 randomized, multicenter and controlled study is analyzing the therapeutic benefits of honey supplementation (1 g/kg/day divided into 2–3 doses for consecutive 14 days) in patients with COVID-19. (National Clinical Trial Number: NCT04323345)

• In another clinical trial, a group from Pakistan aims to evaluate the effectiveness of Nigella sativa/Black Cummins (1 mg orally) and honey (30 mL at 12/12 hours) in clearing the SARS-CoV-2, lowering the severity of COVID-19 symptoms and decreasing the mortality rate (National Clinical Trial Number: NCT04347382).

The results of these clinical trials (still running), as well as other preclinical studies, will indicate the benefit of honey in the pharmacotherapy of COVID-19.

Unfortunately these studies do not indicate the honey origin and whether it is unifloral or multifloral, and it is well-known that the antimicrobial activity of honey depends on its chemical composition, which in turn depends on botanical sources, honeybee metabolism, and also environmental, seasonal and climatic conditions. Phenolic compounds are the most important component of honey which trigger antiviral activity and differ a lot from plant to plant.

It boosts immunity, improves oral health, treats otorhinolaryngologic and respiratory diseases, aids in asthma,  protects liver, has anti-radiation effect, boosts immunity and has anti-inflamatory activity, rejuvenates skin and helps in psoriazis, protects kidneys and reduces proteinuria, is good for diabetes and obesity, prevents and treats leukemia and cancer, protects against radiation and aluminium toxicity, and the lists goes on and on. 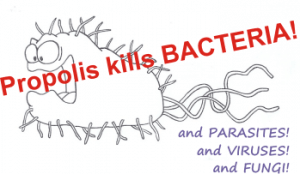 Currently, a randomized study of phase 2 has been conducted in Brazil to assess the impact of the use of Brazilian green propolis extract (400 or 800 mg/day orally or via nasoenteral tube) on oxygen therapy dependency time (in days) and hospitalization time (in days) of patients with COVID-19 (National Clinical Trial Number: NCT04480593)
It is well-known that Brasil has 2 types of propolis, with highly therapeutic properties: red propolis and green propolis. We’ll see the results soon.

This is a strange substance, we could say. It turns regular bees into queens.
All larvae are feed with it, however after a few days, some of them will be continually fed with royal jell and their complete organism will change, compared to honey bees which will eat honey and remain mere honey bees.

Its taste is not sweet, as are the other products of the hive. It’s sour and has a slight smell of phenol. (read more on royal jelly) However, like propolis, it has a long list of therapeutic uses: diabetes type 2, breast cancer, lupus, cholesterol and blood pressure, and so many others.

It is hard to take, it has to be raw and kept only in the freezer. But it definitely is worth the trouble.

Royal jelly also has antiviral properties.
Some studies have shown that raw or purified royal jelly has notable antimicrobial activity. The use of royal jelly alone or in combination with propolis reduced the in vitro viral load of cells infected with the influenza virus A2 (Filipic & Likar, 1976a).

Clinical evidence shows that the combination of royal jelly with other bee products prevents infection during influenza outbreaks. For instance, the frequency of flu was significantly lower (3.7% incidence) among patients who used an apicomplex composed of honey, royal jelly (2%), pollen (3%), and propolis (1%) in comparison with untreated patients (38% incidence) (Filipic & Likar, 1976aa).

Royal jelly also has a powerful antibacterial and anti-fungal activity against K. pneumoniae, P. aeruginosa and C. albicans in vitro (Fontana et al., 2004). These are species frequently recovered from patients hospitalized with COVID-19, as shown by Lansbury et al. (2020), thus suggesting the benefits of royal jelly in preventing co-infections.

This is a product usually not praised for being a therapeutic one. Some say it goes out in the same form it goes inside our bodies. But its complex composition has raised the curiosity of research. It has more than 300 compounds, including fatty acid esters (67%), hydrocarbons (12%–16%), free fatty acids (12%–14%), fatty alcohol (1%), diesters, and exogenous substances, such as residues of propolis, pollen, and small pieces of floral component factors (according to Fratini, Cilia, Mancini, & Felicioli, 2016a).

These results show that beeswax acts mainly against DNA viruses, and its antiviral effect is dependent on the conditions of extraction employed and botanical origin of beewaxs. SARS-CoV-2, similar to Rift Valley fever virus RVFV, which was more resistant to beeswax action, is an enveloped and single stranded RNA virus that can be sensitive to the antiviral effects of beeswax extracts, but currently there are no preclinical evidence to support this hypothesis.

With an astonishing composition, bee pollen has been shown to have antibacterial activity against Gram-positive and Gram-negative bacteria (Fatrcová-Šramková et al., 2013; Margaoan et al., 2015). As for its antiviral activity, its polyphenolic compounds have promising activity against human corona-viruses, such as SARS-CoV and MERS (Chen et al., 2006; Yi et al., 2004).

The phenolic phytochemicals with higher concentrations in bee pollen are quercetin and kaempherol, as well as their glycosides derivates(Rzepecka-Stojko et al., 2015).

Qurcetin: According to Yi et al. (2004), quercetin inhibited the entry of SARS-CoV into Vero E6 cells in vitro. The concentration required to inhibit 50% of SARS-CoV (EC50) was 83.4 μM, which is a relatively low value considering the high concentration of this compound in the bee pollen (60 μmol/g of quercetin in pollen of Apis mellifera L.) (Carpes et al., 2013).

Rzepecka-Stojko et al. in 2015, Chen et al. in 2006 and Rehman, AlAjmi, & Hussain in 2020 have all studied the good effects of quercetin in fighting corona-viruses.
Dr Mercola has countless articles emphasizing the huge benefit of quercetin + Zn supplementation in preventing and treating Covid-19.

Kaempferol and its glycoside analogs inhibit the 3a channel protein of coronavirus. The 3a protein forms a cation-selective channel that becomes expressed in the infected cell and is involved in the mechanism of virus release. All the chemical details lead to the conclusion that kaempherol fights corona-viruses. Schwarz et al. in 2014, Brockway & Denison in 2004 and Li et al. in 2020, confirmed this. 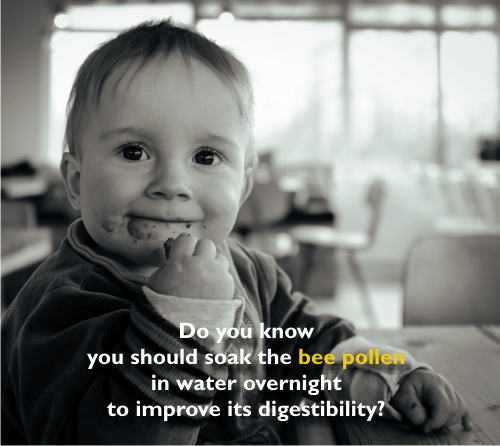 In 2015 Caramalho et al showed that bee venom stimulates the differentiation of human regulatory T cells, which plays an important role in the immune response against SARS-CoV infection.
However the toxicity of melittin found in bee venom is still a problem, though there are strategies to minimize this toxicity and allow the use of higher concentrations of this bee product against viral infections. (Memariani et al., 2019).

Eat honey, propolis, pollen. Take royal jelly to prevent and aid in Covid-19. They are all powerful allies. Trust them!

Supplements for Covid-19? Try honey, pollen, propolis and royal jelly! was last modified: October 26th, 2020 by Laura
Laura 10/26/2020
Again about the most expensive honey in the world. What is centauri honey? What is frankincense honey?

Leave a Reply to Janak raj