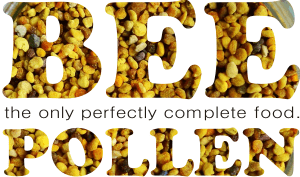 Bee pollen composition has been studied for decades and scientists have reached relevant conclusions, including big differences among each pollen type.

The differences are also given by the way bee pollen is stored and processed. There are more than 200 substances present in bee pollen.

What is bee pollen?
To collect bee pollen, beekeepers place traps inside the hive and when bees arrive with their loads of pollen attached to the hind legs, they must force their way through. Because of the trap’s small size the bees lose part of the pollen baskets, which fall into special containers.
There are different types of pollen traps: outlet, bottom-board, slice, and top-frame ones in which there are perforated screens or grids with small holes of about 5 mm.

So bee pollen is basically flower pollen mixed with bee saliva. But as simplistic and trivial this may sound, the quality of bee pollen have been recognized since the old Egyptians, Greeks, Arabs and it is mentioned even in the Bible. The pollen harvested from the traps is what we call fresh pollen and beekeepers have to collect it every day, because of its high humidity: almost 20 to 30 grams of water per 100 grams of pollen. This humidity makes an ideal culture medium for micro-organisms like bacteria and yeast. Which is why beekeepers have to collect it daily and immediately place it into the freezer. This fresh bee pollen is the one with the most nutritional and therapeutic value and when talking about bee pollen composition we are referring to this type of bee pollen.

Conclusion: frozen fresh bee pollen stored in glass jars for one or more years still results in decrease of antioxidant activity. The best way of preserving the quality of fresh bee pollen is to pack it in vacuum or under nitrogen (N2), thus preserving its biological and nutritive properties.

Dried bee pollen
After thawing bee pollen can be kept only for a few hours and should be further processed as soon as possible to prevent spoilage and preserve its maximum quality. After drying, the water content should be of about 6 g water per 100 g pollen.

There are 2 methods of drying bee pollen: oven drying and freeze drying.

1. The drying should be done in electric ovens, where humidity can continuously escape. The maximum temperature recommended is of 30º C, not at 40º C as it is used today. (according to SZCZESNA, T et al., 1995)

2. Freeze drying, also known as lyophilisation, lyophilization, or cryodesiccationis, is done in special machines and represents a better alternative to heated pollen. During this process the pollen is frozen and then the surrounding pressure is reduced to allow the frozen water to sublime directly from the solid phase to the gas phase.

Yet, the effects on pollen quality have not been tested. It was only proved that it decreased the content of Vitamin C and Provitamin A. (wikipedia on the process of freeze-drying)

The bee pollen that went the process of lyophilisation or freeze-drying, may be stored at room temperature without refrigeration, and it will be protected against spoilage for many years.
Preservation is possible because the greatly reduced water content inhibits the action of microorganisms and enzymes that would normally spoil or degrade the substance.

The quality of dried pollen is below that of fresh pollen. Besides, after a year of keeping it at room temperature while there was no loss of vit C, there were considerable losses of Vit E and beta-carotenes by 15 to 20 %. (According to the Brasilian study “Stability of antioxidant vitamins in bee pollen samples” conducted by DE MELO PEREIRA et al. in 2010.)
Other studies showed that there are loses of considerable amount of its antioxidant activity (about 59%) after one year. (M Campos, 2003)

Fructose, glucose, sucrose, fibers. Generally the carbohydrate content depends on the botanical origin of pollen and is determined by calculation, as the total carbohydrate content cannot be determined easily: 100 less the sum of water, fat, protein and ash content.
Carbohydrates in bee pollen range from 13 to 55 g per 100 g pollen. The recommended daily intake is of 320 g.

The carbohydrates are mainly polysaccharides like starch and cell wall material. The sugars fructose, glucose and sucrose comprise about 90% of all low molecular sugars.

Here are the usual types of sugars found in bee pollen, according to the article published in February 2022, in The Journal of Agricultural and Food Chemistry: The fat content and composition differ a lot on the botanical origin. There are:
– polar and neutral fats (mono-, di and triglycerides), in bigger amounts,
– fatty acids, sterols and hydrocarbons (terpenes), in smaller amounts.

MANNING, R (2001) reports in a review that 70 to 90 % of the lipids are composed of fatty acids. As a rule, bee pollen has a higher amount of unsaturated acids, with some exceptions such as sunflower pollen.

In a study from 1974, conducted by STANLEY, R G et al., 3 % of the total lipids are free fatty acid and about half of them are the unsaturated acids oleic, linoleic (omega-6) and linolenic (omega-3).

TIKHONOV, A I; (2006) reports the same amount, like 50-60% of fatty acids are unsaturated acids. And from these unsaturated acids, 70% are oleic, linoleic (Omega 6) and ∝-linolenic (Omega 3) acids. (from mixed pollen from different geographic origins).

Essential amino acids (our body cannot synthesize them, and must be ingested in our diet) found in bee pollen:

The mineral content of bee pollen can vary according to the botanical origin and geographic area. Thus the pollen gathered in spring is different from the one gather in late summer. There have been recorder differences in potassium, magnesium, calcium, manganese and iron, while the zinc and copper content of pollen appeared to be more constant (HERBERT, E W, 1987).

Compared to the vitamin-richest corns, fruits and vegetables, pollen has 20 times more vitamine A and significantly more panthothenic and folic acids and biotin.
Values are in mg per 100 g pollen. · Provitamin A (b-Carotin): 1 – 20 Represents an antioxidant with powerful antiprostatis and anti prostate cancer activity. β-carotene represents about 17 % of the totals carotenoids. There are differences according to the botanical source. Thus French Cistus pollen contains 20 times more carotenoids than chestnut one (PERCIE DU SERT, 2009).
Lycopene is a very important carotene, also with antiprostatis activity. Read more on how to take bee pollen

Theses are the compounds that give color and taste to pollen. They can be colorless, yellow, red and purple. And they are the ones that give the bitter taste of pollen.

Quercetin is one of the main flavonoids in bee pollen. This compound shows in vitro a permanent inhibition of androgen-independents cancer cells PC-3 at the dose of 100 μM.
In prostate cancer cells this activity is due to the ability of quercetin to block the cell cycle in various phases through an inhibition of the expression of several specific genes.
Quercetin also upregulates expression of various tumour suppressor genes while down-regulating oncogene expression.

Apigenin and other flavonoids present in bee pollen are able to depress the kinase activation in prostate cancer (LEPLEY, D M, 2008).

Pollen contains also 0.1 – 0.4 % sterols and 0.1 to 0.2 % mono-terpenes.  It is considered that plant sterols have a cholesterol-lowering effects in humans.

An antioxidant with powerful antiprostatis and anti prostate cancer activity.
β-carotene represents about 17 % of the totals carotenoids. There are differences according to the botanical source. Thus French Cistus pollen contains 20 times more carotenoids than chestnut one (PERCIE DU SERT, 2009).
Lycopene is a very important carotene with antiprostatis activity.

Bee pollen contains more protein than any animal source and more amino acids than equal weight of eggs or beef.

Your local beekeepers may have it. Is not a rule for everyone, but you can ask. Yet, don’t buy bee pollen if it comes from beekeepers from the city as the pollen can be polluted by air contaminants, heavy metals and pesticides. The pollen should be gathered in areas which are at least 3 km distant from contamination sources such as heavy traffic and pesticide-treated agricultural areas. That hard to find in the USA or most of the countries from Europe.
The only reliable country is Australia.
The best bee pollen is the one gathered from meadows (wild flowers) and from forests.

. Or some other types coming from different countries.

Amazon.co.uk used to offer 3 types of frozen bee pollen: from rose, willlow and heather. But for an unknown reason they took it off. You might give it a search from time to time, maybe the products reentered.

And some other online shops like therawhoneyshop.com or brushymountainbeefarm.com are worth searching, they might as well sell good quality bee pollen.

! When you buy fresh pollen, the seller ships it normally, without any ice or special boxes. This is ok, the bee pollen can be kept for several hours at room temperature and then can be refrozen without any damage. Keep 6 daily doses in a container in your refrigerator and the rest put in the freezer. The bee pollen is well kept for 6 days in your fridge. When it is over, take out another 6 day doses.

! The best way to take bee pollen is after it was macerated in water or other liquid for several hours (best over night). This is done in order to improve digestibility, a method also used for other heavy digestible grain products.
Or, you can at least chew it very very well. Don’t just swallow the whole grains.
From this point of view the best product is beebread, which offer an optimal digestibility and bioavailability of pollen ingredients.

! Don’t expect it to taste like honey. It can be sweet, sour, bitter or spicy. Yet, don’t eat if it tastes and smells as “molds”, fermented, rancid or has visual impurities such as bee parts, wax, plant particles or other extraneous matter.

Do not confuse bee pollen with beebread.

Beebread refers to the pollen stored by the bees in their combs, which has a different composition than bee pollen. The bees have placed the pollen into cells, added various enzymes (from their saliva) and honey, and subsequently this mixture underwent a process of lactic fermentation. This makes it more digestible and enriched with new nutrients.
Beebread is highly superior to bee pollen. Read more on what is beebread.