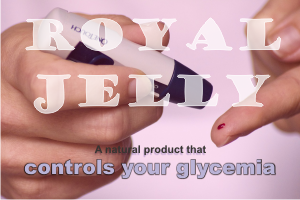 If you have been searching for a natural treatment for diabetes type 2 and still haven’t decided on anything, take a look at what royal jelly can do.
There already have been lots of studies showing the role of royal jelly in reduction of serum glucose and lipids in animals and healthy subjects. But recent studies have also proved the beneficial influence on patients with type 2 diabetes.

Type 2 diabetes represents the fourth major public health problem worldwide. And natural treatments are the most wanted treatments nowadays, due to lack of side-effects.

Royal Jelly has insulin-like activity and blood glucose modulating properties, that have been reported both in animals and humans. Besides, it brings positive results in decreasing the collateral damages brought by this disease in the reproductive system, pancreas, liver, skin and so on.

Studies and clinical trials have shown improvements in diabetics at the doses of 1 g royal jelly taken 3 times per day, for 8 weeks.

I’d say it’s worth trying it.

! Yet, make sure you are not allergic to it.
If you are allergic to other bee products, it’s likely you are allergic to royal jelly, too. Also if you have a highly allergic sensitivity, try it first in very tiny amounts, like 0.1 mg, see what happens and increase the quantity little by little till you get to the desired dose.
And thirdly, be careful if you have asthma. Though it is said royal jelly can also treat asthma, there have been reported cases of allergic reactions, even anaphylactic ones, in asthmatic people.

As to what is the best form to take royal jelly, go with fresh royal jelly. Amazon.com can sell you some good quality products, shipped in isofoam boxes or other insulating materials. Read more about the storage conditions in the presentation page: Royal jelly.

Below are some recent studies and clinical trials, supporting the beneficial effect of this ancient remedy on type 2 diabetics.

Fifty patients with type 2 diabetes participated in this double-blind, placebo-controlled study. There were two groups formed, one group received placebo pills and one group received royal jelly in doses of 1000 mg 3 times per day for 8 weeks. The results showed that glucose concentrations decreased in the RJ group (-9.4 mg/dL vs. 4 mg/dL; p=0.011)

Their conclusion: “These data suggest that RJ intake may have desirable effects on serum glucose, Apo-A-I concentrations and ApoB/ApoA-I ratios in people with type 2 diabetes.”

While the above study showed good results after 8 weeks of treatment, a single dose of royal jelly is ineffective (see the next study). It has to be a long time treatment, not a short one.

This andomized clinical trial used 40 patients and give them either placebo or 10 g fresh Royal jelly after overnight fasting. The tests showed that RJ did not appear to have significant immediate effects on glycemic factors in patients with type 2 diabetes.

The clinical trial was done on 50 type 2 diabetic females, split in 2 groups: placebo and royal jelly treatment. The women received a daily dose of 1,000 mg royal jelly soft gel. Not even in its fresh form! For 8 weeks.

Their conclusion: “On the basis of our findings, it seems that royal jelly supplementation may be beneficial in controlling diabetes outcomes.” Their conclusion: “Dietary RJ ameliorates diet-induced obesity, hyperglycemia, and hepatic steatosis by promoting metabolic thermogenesis in BAT in mice. RJ may be a novel promising food ingredient to combat obesity and metabolic disorders.”

It improves hyperglycemia in diabetis

Their conclusion: “The improvement in hyperglycemia due to long-term RJ administration may be because of the suppression of G6Pase expression through the upregulation of AdipoQ and AdipoR1 mRNA and pAMPK protein expressions.”

It reduces other damages produced by diabetes:

1. It improves oxidative damage induced in liver and pancreas of diabetic rats

• The study from 2016, Improvement in Serum Biochemical Alterations and Oxidative Stress of Liver and Pancreas following Use of Royal Jelly in Streptozotocin-Induced Diabetic Rats, by Ghanbari E et al. from the Faculty of Science, Urmia University, Iran, used rats which were diabetic induced with streptozotocin (STZ).

The mice received royal jelly in a dose of 100 mg/kg body weight, administered orally for 42 days. After the tests it was shown that royal jelly treatment restored the changes of the diabetic rats to their normal levels.  Even more, it significantly improved reduced levels of FRAP 9 (ferric reducing antioxidant power) and catalase, as well as high malondialdehyde level in liver and pancreas (P<0.05).

Their conclusion: “RJ improves oxidative damage induced by STZ in the liver and pancreas of rats; therefore, it can be considered as an effective and alternative treatment for diabetes.”

2. It solves the damages done to males’ reproductive system, both to quality of sperm and libido

Diabetes mellitus does not come alone. Men suffer more from this disease, as they are touched in the highest sensitive point: their masculinity! Testicular weight, sperm count, motility, viability and serum testosterone levels – they will all be affected. Royal jelly is known to increase all these parameters in healthy subjects, but it also helps diabetics. Here are some recent studies that support this.

The rats received by gavage a dose of 100 mg/kg body weight, for 6 weeks. The results showed that:

• Another study on the same issue, Protective effects of royal jelly against testicular damage in streptozotocin-induced diabetic rats, was performed by Karaca T et al. from Turkey.
While it is known that diabetes induces a significant increase in testicular apoptotic cell death (caspase-3-positive cells), their number decreased after the royal jelly treatment.

Their conclusion: “Supplementation with royal jelly may be beneficial in weight management of diabetic patients.“