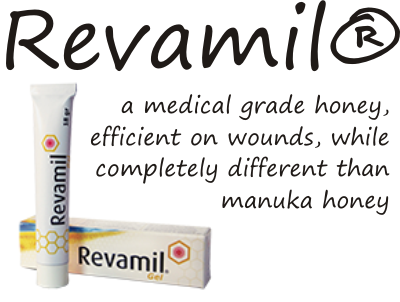 Though it is medical grade honey, Revamil it is NOT MADE FROM MANUKA HONEY. Revamil is a CE-marked, standardized, medical-grade honey, produced under controlled conditions in greenhouses, by Bfactory Health Products, Rhenen, The Netherlands.

Revamil is sourced in the Netherlands from healthy bee colonies under controlled circumstances. As a result of this controlled production process, Revamil has a reproducible, highly antibacterial effect. All products are CE-registered and therefore comply with all of the safety requirements which are important for professional wound care.
The researchers at the University of Wageningen are continually studying to find the best products in wound management and to offer a type of honey with consistent quality and reproducible effectiveness. This is the main quality of this type of honey. A regular honey is usually different from batch to batch.

Revamil is a promising topical antimicrobial agent for prevention or treatment of infections, including those caused by multidrug-resistant bacteria.

Revamil is a powerful antimicrobial. How does Revamil kill bacteria?

There are 5 factors that give Revamil honey its antimicrobial powers: Hydrogen peroxide activity, MGO, bee defensin-1, low pH and high content of sugars. The test conducted in 2012, by Paulus H. S. Kwakman et al, Amsterdam, have analysed the factors that lead to killing drug-resistant bacteria in the medical grade honey Revamil. All bacteria that were tested, including
– Bacillus subtilis,
– methicillin-resistant Staphylococcus aureus,
– extended-spectrum-lactamase producing Escherichia coli,
– ciprofloxacin-resistant Pseudomonas aeruginosa,
– vancomycin-resistant Enterococcus faecium,
were killed by 10–20% (v/v) honey, whereas >40% (v/v) of a honey-equivalent sugar solution was required for similar activity. The researchers said that “Honey accumulated up to 5.62 0.54 mM H2O2 and contained 0.25  0.01 mM methylglyoxal (MGO). After enzymatic neutralization of these two compounds, honey retained substantial activity. Using B. subtilis for activity-guided isolation of the additional antimicrobial factors, we discovered bee defensin-1 in honey. After combined neutralization of H2O2, MGO, and bee defensin-1, 20% honey had only minimal activity left, and subsequent adjustment of the pH of this honey from 3.3 to 7.0 reduced the activity to that of sugar alone. Activity against all other bacteria tested depended on sugar, H2O2, MGO, and bee defensin-1.”

As a conclusion, here are the factors that lead to its powerful antimicrobial activity:

1. H2O2 (Hydrogen peroxide)  Hydrogen peroxide is produced by the Apis mellifera, the regular honey bees, by glucose oxidase enzyme, when honey is diluted. Revamiol honey diluted to 40 to 20% accumulated high levels of H2O2 24 h after dilution, with a maximum of 5.62±0.54 mM H2O2 formed in 30% honey.

2. MGO  Methylglyoxal is found in Revamil honey at a relatively low concentration of 0.25 mM, if compared to the concentration found in manuka honey, which is up to 16.1 mM.
According to scientists, MGO is a reactive metabolite that can exert toxic effects by the direct inhibition of enzymes, by genomic modifications resulting in carcinogenesis, and by protein modifications resulting in the formation of advanced glycation end products. The latter are believed to be the main determinants for pathological effects related to diabetes. The main reason that do not recommend taking manuka honey internally, at least until there are conclusive evidence that in a honey environment, MGO is not toxic to humans.
While the MGO content in Revamil is way too small compared to manuka’s, tests revealed that even this small quantity of MGO has a powerful contribution at the overall antimicrobial activity of revamil.

3. Bee defensin-1 This is a cationic antimicrobial peptide (AMP) usually found only in royal jelly, which is the major food source for bee queen larvae, and the first food all bees receive in their first 3 days of existence. (see What’s the life of a bee?)

Bee defensin-1 mRNA has been identified in the hypopharyngeal gland of young worker bees, suggesting this gland is involved in production of bee defensin-1 found in royal jelly.
The older bees add the secretion from their hypopharyngeal glands to the collected nectar. The enzymes then convert sucrose to glucose and fructose, and glucose oxidase converts the glucose to hydrogen peroxide and gluconic acid. These latter compounds are considered to prevent the microbial spoilage of unripe honey.

Because there was bee defensin-1 found in honey, seems that even when ages, the bees’ gland are still producing it. So, this peptide also contributes to the protection of both royal jelly and honey, against microbial spoilage.

What’s the difference between revamil and manuka?

1. Revamil is always the same. Manuka changes from batch to batch.
Manuka honey obtained from manuka trees (Leptospermum scoparium) in New Zealand and Australia has large batch-to-batch variation in antibacterial activity. Standardization of RS honey, the source for Revamil®, is based on a controlled production process in greenhouses.

2. Completely different compositions.
Revamil actions through its 2 major factors: Bee defensin-1 and H₂O₂. Manuka honey acts through different factors, its main antimicrobial factor being: MGO (methylglyoxal), which is in 44-fold higher concentrations than in Revamil. Yet, after this MGO was neutralized, the honey still retained bactericidal activity, due to…..unknown factors. – There is a need of more serious research here, too.

Compared to other honeys, the evidence found no presence of antimicrobial peptides. For several other honeys, proteins were reported to contribute to the antibacterial activity, but their identity remains, again, unknown. Some studies say that the lack of peptide and proteins in manuka is also a result of MGO. Obtained results demonstrate that MGO abrogates the antibacterial activity of defensin1 and modifies MRJP1 in manuka honey. Scientists assume that MGO could also have negative effects on the structure and function of other proteins/peptides in manuka honey, including glucose oxidase, which is responsible for generating hydrogen peroxide. (“Methylglyoxal-induced modifications of significant honeybee proteinous components in manuka honey: Possible therapeutic implications.” a 2012 study by Majtan J et al.)

3. Different bactericidal properties. Different time of anti-bactericidal reaction.
Due to different composition, there are distinct bactericidal properties. In the studies, Revamil reacted slower than manuka honey. EG.
considering rapid activity:
– against Bacillus. subtilis, E. coli and P. aeruginosa, Revamil had much more potent rapid activity (killed them in 2 hours) than manuka honey. Manuka was rapid only agains Bacillus subtilis.
– against MRSA: both revamil and manuka honey lacked rapid activity.
considering slow activity:
– manuka honey was more potent than Revamil, especially against MRSA and B. subtilis. After 24 hours of incubation, both honeys killed all tested bacteria, including MRSA, but manuka honey retained activity up to higher dilutions than Revamil.
(according to the 2011 study: Two Major Medicinal Honeys Have Different Mechanisms of Bactericidal Activity, by  Paulus H. S. Kwakman et al.)

In 2011, the study Medical-grade honey enriched with antimicrobial peptides has enhanced activity against antibiotic-resistant pathogens, by P. H. S. Kwakman, showed that revamil honey enriched with BP2 (Bactericidal Peptide 2) rapidly killed all bacteria tested and had a broader spectrum of bactericidal activity than either BP2 or honey alone.

We should not forget that not only revamil, manuka or maharishi honey, have antimicrobial activity. Mountain, capillano and eco-honeys have exhibited inhibitory activity against H. pylori isolates, at concentration 10% (v/v), and this that locally produced honeys possess excellent antibacterial activity comparable to the commercial honeys. Stay away from these ones.

a high enzyme content and a low pH. It is recommended for chronic and infected wounds.

Here is how the producer recommends us to use it:
– First clean the wound
– Lightly moisten a dry wound with clean water
– Apply a thin quantity of wound gel and cover in the usual manner
– Treat the wound once per day during the first week, thereafter every 2 to 3 days.

Revamil® Balm is made of neutral ointment combined with pure honey, and has effective wound-healing and antibacterial properties. It is kind to the skin and is primarily suitable for the treatment of surface wounds, such as grazes and wounds caused by the scratching of eczema. Revamil Balm can be applied in professional wound care and as an ointment for domestic first aid.

Recommended for domestic use!

These dressings are made from polyacetate impregnated with 100% pure, honey with a high enzyme content and a low pH. They do not stick to the wound and guarantees the slow release of the honey into the wound bed.

It is recommended for all types of chronic wounds and it can be found in sizes of 5×5 cm, 8×8 cm, 10×10 cm and 10×20 cm. A (sterile) dressing is for single use and sufficient for one treatment. (click on the picture to read more on Amazon.co.uk)

It should be applied like the rest of Revamil products, clean the wound, cover it with the dressing, secure the wound gauze, treat it once per day for a week and then every 2 or 3 days.

It consists of 12 syringes of 100% pure, medicinal honey with a high enzyme content and a low pH. Revamil Single Dose has a strong and long-lasting antibacterial effect. A syringe is for single use and sufficient for one treatment. The honey gel can be applied thoroughly to deep wounds and under the edges of wounds.

The wound should be first cleaned, then the honey gel to the wound depressing the syringe until it is empty. Cover the wound. Treat the wound once per day for a week, then every 2 or 3 days.

What are Revamil products good for?

Here are the efficiency of the Revamil products, so you’ll get an idea which is good for what. The more dots, the most efficient. The list is offered by the producer itself. Try the domestic Revamil balm, it’s good for regular surface wounds, such as grazes and wounds caused by the scratching of eczema.

! The producer does not mention them to be suitable for burns, so I would not be a pioneer and try it on my skin. I would rather buy one that it us well-known to work on them.
Like Medihoney antibiotic gel, followed by a proper dressing.

Other honeys considered to be efficient in treating skin conditions: 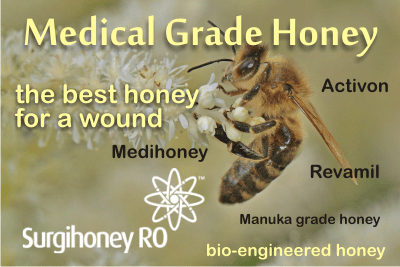 What is Surgihoney? One of the best ways to heal infected wound. 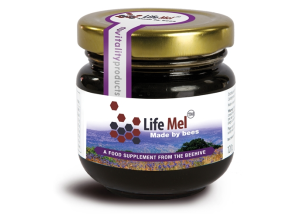