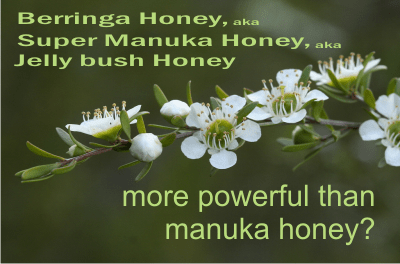 It is claimed that Berringa honey is The World’s Strongest Active Antibacterial Honey.

And, of course, they all must have exotic names, be very expensive and hard to get.

Australians have manuka trees and though the species of the tree is exactly the same, Leptospermum scoparium, the honey produced in New Zealand is superior to the one produced in Australia, from the same tree. But they have found a cousin of Leptospermum scoparium, from the same Myrtaceae family, Leptospermum polygalifolium, which produces a honey that beats the well-known manuka honey from New Zealand, at exactly the same characteristic that has made it so popular: MGO (methylglyoxal) – a substance with highly antimicrobial activity.
To understand the difference, here are the quantities of MGO found in them:

So, is it super? Looking at the number above, yes, it is. It remains to be seen if this is a good thing and we can still consider it food, not only medicine.

Funny name, right?
Leptospermum comes from Greek leptos meaning thin and sperma, meaning a seed, a reference to the small seeds. And polygalifolium comes from Latin folius, a leaf; ie. with leaves resembling the genus Polygala.
Also known as Berringa, Tantoon, Tantoon Tea Tree, Yellow Tea Tree, Wild May, Common Tea Tree, Leptospermum polygalifolium grows along the north coast of New South Wales, and Southern Queensland in Australia. Six subspecies are recognized, though there is significant intergradation between them. It’s an evergreen drought-tolerant bush, growing up to 4-6 ft. (1.2-1.8 m) loving sun to partial shade. The bark usually is close and firm but soft, thick and flaky in some forms.

Leaves are sometimes aromatic, but not strongly, and are usually from 5 mm to 20 mm long, oblanceolate-elliptical to narrowly linear-elliptical, flat or with the margins recurved, the tip often recurved with a soft or sharp point or, occasionally, a short pungent point.

The bush commences flowering in early spring, and usually flowers throughout October. Flowers are usually white but may be greenish, off-white to pale pink and are usually 10 to 15 mm in diameter, occurring singly on modified shoots on the ends of very short or long branches, often in adjacent axils and on adjacent branches with new growth extending, mostly from branch ends, during or after flowering.

It flowers later than most heaths and tee trees, ensuring that the bees harvest nearly all their honey from this particular species. The flowers are attractive to butterflies and birds, and honey bees love the nectar they produce.

The harvest usually starts around mid-November, when the honey is extracted from the hives. The honey is more like a jelly substance, making extraction difficult, but producing a high quality manuka honey with low moisture content.

Manuka honey has been hugely researched if we compare it with berringa honey, which doesn’t benefit of such enormous marketing and popularity. But considering the amount of MGO found in it, Australians might very well consider this honey a golden mine.
Which is why, The Berringa Super Manuka Honey – how they named it – was certified by the Australian Government as certified organic antibacterial honey.

Their honey standards are high, their products are certified organic and compliant with international standards. It has been tested by the Queensland Government’s Innovation Food Technologies Laboratories (NATA accredited laboratories), and it was shown that Berringa Super Manuka Honey has antibacterial and antimicrobial properties with the therapeutic effects.

NATA accredited laboratories are globally accepted and recognized for their independent assurance of technical competence through best practice.

The quantity of MGO and berringa honey’s certification as highly therapeutic was also confirmed by Cardiff University UK & The State of Queensland, Department of Employment, Economic Development and Innovation, in 2010.

First of all, I need to clarify one annoying fact that I see reading health blogs, expressions like “the antibacterial and antimicrobial effects of ….”  Microbes are microscopic organism, so tiny that can only be seen with the help of a microscope. It’s a very general term that includes bacteria, fungi, archaea, protists and, by some scientists, viruses, too, though there is still a debate as to whether viruses can be considered living creatures or not.
So, we cannot say antimicrobial and antibacterial, as bacteria are included in the class of microbes.

The first one is connected to an enzyme called oxidase, added by honey bees into the nectar gathered from flowers, to turn it into honey. Nothing happens when simply being in honey, but when honey gets in contact with serum from damaged tissues, it is diluted, the pH is raised, sodium is added and  the enzyme oxidase is activated. It will break the glucose (from the flower’s nectar) down into gluconic acid and hydrogen peroxide. And this hydrogen peroxide is a disinfectant used for decades in our medicinal world.

As long as it is honey, of any kind, this hydrogen-peroxide activity will take place. The most efficient of this is marri honey and jarrah honey, but of couse that it is present in berringa honey, too. The bad news is that this peroxide activity is easily destroyed by temperature, light and time. Besides, catalase, an enzyme that destroys hydrogen peroxide can also be present in the nectar and in the body fluids.

All the other factors that bring the antimicrobial activity of a honey, are part of this non-peroxide activity. They include: low pH, high osmotic effect, phytochemical components and certain substances contained by only some honeys, such as MGO (methylglyoxal).

• Among the phytochemical components found in berringa honey, that contribute a lot to its antimicrobial activity, a study by Mustafa K et al, published in 2003, revealed the principal components in the ethanol extract of L. polygalifolium subsp. polygalifolium as being 2,5-Dihydroxy-6-methyl-7-methoxyflavanone and its isomer 2,5-dihydroxy-8-methyl-7-methoxyflavanone.

Other identified  flavonoids include an equilibrating mixture of novel 2,3,5-trihydroxyflavanones – the first discovery of this type of compound from a natural source.
This study has also confirmed the presence of the triketones, flavesone and leptospermone, along with the closely related isoleptospermone as anti-microbial components.

• Leptosin. A study from 2012, conducted by Kato Y from University of Hyogo, Hyogo, Japan, managed to isolate “two active compounds from manuka honey, responsable for myeloperoxidase (MPO) inhibition. One is methyl syringate (MSYR), and the other was identified as a novel glycoside of MSYR, methyl syringate 4-O-β-D-gentiobiose, which has been named “leptosin” after the genus Leptospermum. Leptosin was only found in honeys from the Oceania region, and abundantly in manuka honey including jelly bush honey from Leptospermum polygalifolium in Australia. Therefore, leptosin may be a good chemical marker for manuka honey. Interestingly, the concentration of leptosin in manuka honey was positively correlated with the unique manuka factor (UMF) value, which is expressed as phenol equivalents of its bactericidal activity.”

• Methylglyoxal (on short MGO) is a substance which derives from dihydroxyacetone, a compound present in various levels in manuka nectar (Leptospermum species) but also in other plants. Not all Leptospermum species have it, actually recent tests identified MGO in 70.6% of Australian Leptospermum honey samples tested, with a median of 16.7% phenol equivalent. The highest concentration was found in L.  polygalifolium, but varying with area. Comparing berringa honey from Australia with manuka honey from New Zealand is not a difficult task if we consider the MGO content. Some manuka producers put this concentration directly on the label.
But others, show a more complete antimicrobial activity under the form of UMF – Unique Manuka Factor, which includes all antimicrobial factors. Here is a comparison between these grades: Errr, no. At least this is what scientists have found after lots of research.
Queensland Government’s Innovation Food Technologies Laboratories tested berringa honey and showed that it had antibacterial and antimicrobial properties with the ability to inhibit Staphylococcus aureus and E-coli. The results also indicated that MGO was stable across the product range, and had great effect whether using +300MGO or +900MGO. Research is continuing into the amazing properties of Berringa Super Manuka honey, and the variety of its applications.

“MGO has great antimicrobial effect whether using +300MGO or +900MGO.”

Research will surely continue, yet the evidence remains: both manuka honey and berringa honey have highly antimicrobial activity.

The effects of ingestions of MGO are still not enough researched and in this point the ingestion of large quantities may be considered dangerous.

MGO is a toxic physiological metabolite

Where does MGO come from?

– It’s synthesized by our body.
– We are exposed to it, via inhalation of ambient air and ingestion of food and drinking water. For example, we ingest it from food: it’s a coffee aroma constituent (in our home-brew and instant coffee), it is found in edible oils (sesame, safflower and sardine oil) and in a component of beef flavor.
– It is found in complex chemical compounds such as pyrethrins, tanning leather, flavoring. It’s supplied commercially as a 30% aqueous solution.

MGO is a highly reactive dicarbonyl metabolite, formed during glucose, protein and fatty acid metabolism. Meaning, we all have it in our bodies. But an excess of it can increase ROS ( reactive oxygen species) production and lead to oxidative stress and then to advanced glycation end products (AGEs) – which are associated with the aging process and age-related diseases such as cardiovascular complications of diabetes, neurodegenerative diseases and connective tissue disorders. And again an increase in oxidative stress.

Today researchers are looking for specific and effective scavengers and crosslink breakers of MG and AGEs are being developed and can become potential treatments to slow the aging process and prevent many diseases. Why would we want to increase the amount of MGO already present in our bodies?

Is it useful for something?

It has antimicrobial effect. In honey, it has been successfully used to treat any type of skin infection. Besides, there are ongoing studies as to its use in treating different diseases. For example its effects are in research as a mean to induce apoptosis in human prostate carcinoma: potential modality for prostate cancer treatment. (study)

! Diabetics should stay far away from berringa honey or manuka honey with high concentrations of MGO. Their body already has elevate levels of MGO. Diabetic ketoacidosis and recovery phase increase even more the methylglyoxal level. (study)
MGO from manuka/berringa honeys may also have a detrimental effect on diabetic ulcers. (study). More about this in the article “Can diabetics eat manuka honey?”

Honeys with high content of MGO should not be consumed by people with IBS, IBD, renal failure, hypertension and sepsis. Please also read Is Manuka Honey safe to eat?

A study from 2015 conducted by Sultanbawa Y, from the Centre for Nutrition and Food Science, Queensland Alliance for Agriculture and Food Innovation, The University of Queensland, Australia, used infrared spectroscopy as a predictive tool for honey antibacterial activity and methylglyoxal content.

These results indicate that robust predictive equations could be developed using infrared spectroscopy for commercial application where the prediction of bacterial inhibition is needed to ‘value’ honeys with methylglyoxal contents in excess of 200mg/kg.

Brisbane researchers named berringa honey as the ‘healthiest in the world’. Here is what Channel 9 news reported on this honey: