Honey is a natural remedy for conjunctivitis. And other eye diseases. 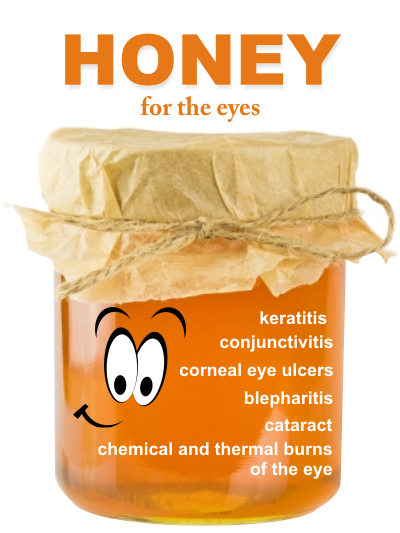 Raw organic honey is used for eye diseases. This is not a new discovery, not something that needs to be put in the headlines of our daily news. There are details about this ever since 350 BC, when Aristotle wrote his Historia Animalium. So why have we completely abandoned this traditional way of healing our eyes?

In Mali and traditional Indian medicine honey has been long used to treat eye disorders. Mayas were using honey for the eyes. Russia, Egypt, Romania are only some of the countries which bring reports and proofs that honey can be a trustful remedy in treating eye diseases.

· In ancient times honey from Attica had a special reputation as a curative substance for eye disorders.¹

· In Mali for the topical treatment of measles, and in the eyes in measles to prevent conical scarring.²

· In the Rangarya Medical College of India honey has been used to treat corneal eye ulcers, blepharitis (inflammation of he eye-lids), catarrhal conjunctivitis and keratitis. And honey was also successful in various ailments of the cornea.
Sarma, an ophthalmic surgeon at Rangaraya Medical College, India, has been treating bacterial corneal ulcers with honey. Good results in general were obtained, with remission in more than 60% of the cases.

· Another report has described the use of honey in place of petroleum jelly in a 3% sulfidine eye ointment for the treatment of three cases of keratitis. 4

·  It also described a case where a lime burn of the cornea was treated with pure honey, with half-vision being restored in 12 days; and several other cases of scrofulous keratitis had responded to treatment with pure honey.

Russian apitherapists have reveled the way they use honey to treat the eye:  undiluted or 20-50 % water solutions is applied to the eye under the lower eye lid to treat chemical and thermal burns of the eye, conjunctivitis and infections of the cornea. How can honey treat eye disorders?

The healing effect of honey is explained by its anti-inflammatory, antibacterial and antifungal properties of honey.

• In 1955, Meier has referred to honey being used to treat eyes discharging pus.³

• In 1982 EMARAH, M H  wrote “A clinical study of the topical use of bee honey in the treatment of some occular
diseases.” published in the “Bulletin of Islamic Medicine”. The study reports the successful treatment by honey of keratitis, conjunctivitis and blepharitis in Egypt.

The honey was applied under the lower eyelid just like an eye ointment would be applied. Improvement was seen in 85% of the cases, with no deterioration seen in any of the other 15%. There was reported a transient stinging sensation and redness of the eye soon after putting honey in the eye, but never enough to stop the treatment in the 102 cases in the trial. A similar reaction was reported by one of the other authors describing the use of honey in ophthalmology.

• In 2001 Peter Molan wrote in his work “Why honey is effective as a medicine. Its use in modern medicine” a review on how honey was always used in treating eye conditions.

• In 2003 ALI, A T M M wrote in his “Prevention of ammonia-induced gastric lesions in rats by natural honey.” published in the Journal of Nutritional & Environmental Medicine, offers another explanation of the healing effect of honey in eye diseases, consisting in the irritation effect, triggering healing processes of the eye.

• In 2011 UWAYDAT, S; et al. in their work “The Use of Topical Honey in the Treatment of Corneal Abrasions and Endotoxin-Induced Keratitis in an Animal Model. Current eye research” explained why honey was good for keratitis:

But in India medicine functions differently. The honey they use therapeutically is not exactly the honey as we know it. According to Ayurveda there are eight different types of honey, made of different mixtures of monofloral honeys:
The honey they use to treat eye disorders is Makshikam Honey, also used to treat hepatitis, piles, asthma, cough and tuberculosis.

The other 7 honeys used in Ayurveda are:

If you are interested in how are these honeys made of please read the work of PRAKASH S and RATNA R, “Honey in Ayurvedic Medicine”, edited by Laïd Boukraâ in “Honey in Traditional and Modern Medicine“, published in 2014 by CRC Press Taylor and Francis Group.

In preparing these honeys, Ayurvedic therapists prefer wild Indian bees, though beekeepers use Italian species in their hives. Other known honey used: Samskritha Madhu (which means cultured or purified honey) and Maharishi Honey.

Honey for the eyes – a precious medicine in Romania

Romania is a country with a long tradition in beekeeping. No wonder than that it holds lots of products from the hive, good as food and medicine.

Our grandparents and great grandparents often used honey eyes. It was at handy whenever they needed it, while working in the field or at the end of a working day. They wound use it as a cream on red eyes with dust and dirt.
And although this honey was something long used by Romanian peasants, today we can hardly find any.
Don’t ask why, the Big Pharma holds all the answers.

Ion Bodnariu is among the few beekeepers who still has eye honey. He lives on Danube’s side, near Harsova, and has 200 hives. And though it has over 34 years of experience, he still says he doesn’t hold the absolute truth of harvesting the best honey for the eye. He’s probably just being modest. What is different at this honey?

It’s acacia honey, but a noble accacia honey, extracted only from honeycombs caps. “These caps are a natural seal that bees make” – Bodnariu says. According to him, the bees makes the cell, fills it with honey and before capping it completely, it leaves a small hole. Through it, the bee adds a secretion above the honey, containing a bactericidal enzyme called lysozyme, designed to protect honey from cell spores, bacteria and fungi.

What he does now is to cut the caps, leave them drain, strain them and the honey obtained is more valuable than the rest of the honey from the cell.

It is said that Accacia honey has over 435 substances. If we add the other enzymes added by the bee in the last moment to better preserve the honey, we get a more valuable honey. In an analysis report diastase was found in a doubled quantity as in a regular accacia honey.

Bodnariu recommends this noble accacia honey for conjunctivitis, dark circles, corneal erosions and cataracts.
This is how it is used:
Dip your clean finger into the honey and then anoint the eyelid with it. This will excite the tear glands at the base of the eye, near the nose. We will feel a burning yet bearable sensation. Our tears will mix with the honey and liquefy it enough to cover the eye. The lysozyme will disinfect the eye and the vitamins in honey will nourish the connective tissues.  – This is how our beekeeper explains the magic of this honey.

To be considered organic honey, the hives must be placed in an unpolluted place. The Danube offers a natural habitat, free of civilization.

Is it expensive?
I wound’t say that. That small jar you see in the picture is like $2.5. Unfortunately it is rare, the online shops don’t have it and we can only find some at honey festivals. If you want to get in touch with Ion Budnariu, you can send him an email, and hope he has time to read it 🙂 But the transport taxes will surely exceed its value.

Why honey is effective as a medicine.
http://agrointel.ro/54447/ion-bodnariu-printre-putinii-apicultori-care-mai-produc-mierea-de-ochi-cu-care-bunicii-nostri-isi-tratau-vederea/

Picture of the eye by Giuliama via pixabay.com

Honey is a natural remedy for conjunctivitis. And other eye diseases. was last modified: May 4th, 2016 by Laura
Laura 05/04/2016
Deciphering manuka honey: UMF15+, MGO400, 24+ Bio Active, KFactor16, TA. And LOTS OF FRAUDS. Why is honey so valuable? What are polyphenols and what are they good for?