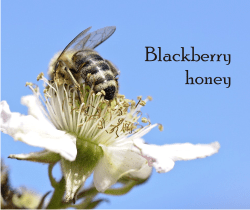 All raspberries have beautiful flowers and plenty of nectar. And bees love them all. Let’s see what is blackberry honey and what is it good for. From a health perspective.

Black raspberry is a common name for three species of genus Rubus:

The taxonomy is too complicated and really there is no point in knowing it to enjoy blackberry honey.

The main difference between blackberries and black raspberries is in how the torus (receptacle or stem) stays with the fruit after the harvest. If after picking the fruit, the torus remains with it, then you have a blackberry.
If the torus remains on the plant and leaves a hollow core in in the fruit, it’s a raspberry.

It’s a perennial shrub which gives us the nutritious and delicious fruit called blackberry, like the whole shrub. It grows wild and it is considered a weed and some countries consider it an invasive species.

The flowers are produced in late spring and early summer. Each flower is about 2–3 cm in diameter with five white or pale pink petals. It has plenty nectar and pollen.

Blackberry fruits are red before they are ripe, leading to an old expression that “blackberries are red when they’re green”.

Bees are important to blackberries.
If the fruit is undeveloped it may be because of inadequate pollinator visits, or a disease caused by a specific virus.
But usually the bees are to blame. Even a small change in weather conditions, such as a rainy day or a day too hot for bees to work after early morning, can reduce the number of visits to the flower, thus reducing the quality of the fruit. But when the weather is fine, bees will devour them, as raspberries are a great favorite of them. Blackberries are full of nutrients and considered superfood. Vegetarians praise them a lot as one of the best fruit to be eaten. In their composition we find:
· high amounts of vitamin C,
· low levels of calories (only 43 calories per 100g serving),
· sodium,
· vitamins A, E, K, and B,
· important minerals such as: copper, manganese, magnesium, potassium, pantothenic acid, pyridoxine, riboflavin, niacin, and folic acid,
· high levels of phenolic flavonoid phytochemicals, such as ellagic acid, anthocyanins, tannin, gallic acid, pelargonidins, quercetin, cyanidins, kaempferol,catechins, and salicylic acid. These antioxidant compounds protect against aging, inflammation, cancer, and other neurological diseases.
· antioxidants: lutein and zeaxanthin (which scavenge free radicals and reactive oxygen species (ROS) that play a role in aging and chronic diseases). Blackberries are considered one of the best high-ORAC (oxygen radical absorbance capacity) foods available.

Blackberry honey is made from all rubus species. Sellers do not differentiate them. Sometimes we find it as bramble honey and this tells us that it is made from wild rubus spp. and the fact that it is not cultivated makes it more organic. Honey bees love all rubus flowers and they offer them plenty of nectar and pollen.

Raspberry honey is a luscious, delicate honey with a surprising and amazing fruity finish. It has a smooth texture and it goes very well with mild soft cheeses of any kind, yogurt, fruits, you name it. It’s highly appreciated by honey eaters and chefs all around the world.

There is no difference between blackberry honey and bramble honey. The latter one is creamy, delicate and slightly acidulous on the finish.

Blackberry honey is found mostly in the mountain area, where they grow naturally. Beekeepers say all the good benefits of the fruit are to be found in the nectar, too, thus in the honey.

Everywhere in the world, blackberry honey is much appreciated.

In Australia more caution is required with ground flora honeys, such as clover and blackberry, as they generally have higher moisture content than some Eucalypt honeys.

Parts of New England, which are hilly and rough, are often covered with wild raspberry, and would offer food for numerous colonies of bees.

In Portugal, on the wild Atlantic coast of the Alentejo region, raspberry cultivation pollinated by honeybees are very intense. The honey harvested there is much appreciated worldwide.

In the US the largest harvest is obtained on the Coastal Pacific Northwestern shores of Washington State.

In California, blackberry honey has a fruity-floral flavor, it’s delicate and smooth, perfect for use in teas and salad dressings. They are famous for their Bloom’s California Raspberry honey.

Oftentimes the two grow together in the forest and honey bees collect nectar and pollen from both of them. The honey and the pollen resulted a really therapeutic.

Apiland, a famous Romanian producer says the pollen of this combo can be called the guardian angel of blood circulation.  Read more about the Sweet chestnut and blackberry pollen

Bramble honey can be found on olico.it, a pure bramble honey made not by the European honey bees but by the Sicilian Black Bee (Sicilian Apis mellifera). Worth trying it.

or in combination with other forest plants from the Galician Mountains, on Amazon.com: Toca Honey Raw Organic Mountain Honey 270g