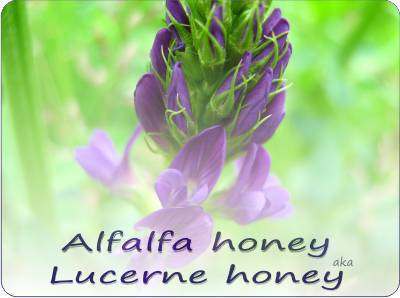 Alfalfa (the name used in North America)
Other name: lucerne – used in the United Kingdom, South Africa, Australia, and New Zealand. In French it is called: Luzerne; in Italian: Erba medica, in German: Saat-Luzerne, in Spanish: Alfalfa, in Finnish: Sinimailanen

Alfalfa is a perennial flowering plant that resembles clover, with clusters of small purple flowers followed by fruits spiralled in 2 to 3 turns containing 10-20 seeds. It represents an important forage crop in many countries around the world. North America covers over 40% of the production, but there are also considerable production area in Argentina, Canada, Russia, Italy, and China.

Lucerne is used for grazing, hay, and silage.  The sun-dried hay of alfalfa has been found to be a source of vitamin D, containing 48 ng/g (1920 IU/kg) vitamin D2 and 0.63 ng/g (25 IU/kg) vitamin D3. (according to wikipedia). It makes a pasture crop fed to horses and cows. And they love it. I remember my grandmother saying that lucerne is for cows like chocolate cake is for me…

A good thing of these crops is that they can be harvested three to six times in one summer, providing a prime nectar flow every time the plant regrows and blooms. Yet the plants are considered to make the best hay only if they are cut before flowering. This is bad for honeybees and beekeepers. Seems that a choice is needed here: honey or better hay.

It has an unique pollination mechanism.

A problematic one. The pollen-carrying keel of the alfalfa flower trips and strikes pollinating bees on the head, which transfer the pollen to the foraging bee. But, our usual western honey bees do not like to be struck in the head repeatedly. (well, pretty understandable.) So, the older (more experienced) bees have learned to defeat this action by drawing nectar from the side of the flower. Thus the bees collect the nectar, but do not carry the pollen and they won’t pollinate the next flower they visit.
Yet, the pollination of the lucerne crop is done and this is die to the younger bees, with less experience, which have not yet learned the trick of avoiding the pollen. They will collect the alfalfa pollen, which has a khaki color and make it an average pollen source for the honey bees’ food supply.
If the western honey bees are harvesting only alfalfa they may suffer protein stress, due to shortage of one of the amino acids comprising the pollen protein, isoleucine.

The leafcutter bee
Besides honeybees, there are other solitary bees, which are better at pollinating alfalfa. The leafcutter bee is a solitary and a gregarious bee species that makes a very efficient pollinator of alfalfa crops. It doesn’t live in colonies and it doesn’t store honey. It nests in individual tunnels in wooden or plastic material, supplied by the alfalfa seed growers.
The leafcutter bees are used in the Pacific Northwest, while western honeybees dominate in California alfalfa seed production. The leafcutter bees (Megachile rotundata) are only half the size of a European Apis mellifera honeybee and their stripes are black and white. They are used extensively in Russia, Canada, USA and New Zealand. Canada exports US$1 million worth of leafcutter bees every year! Yes, simply due to their ability of pollinating alfalfa.
To polinate 1 ha of alfalfa crop there is the need of 8 colonies or 70,000 leafcutter bees.

Other solitary bees are used to pollinate these flowers:
Alkali bees (Nomia melanderi) are black with yellow bands on the abdomen and a light yellow layer of hair over the whole body. They are of the same size as the European Apis mellifera honeybee, but more slender. Alkali bees are present in many of the north western states of the USA. One acre with one million alkali bee nests can pollinate 200 acres of alfalfa.

Bombus affinis also known as “rusty patched bumblebee”, a species of bumblebee that is endemic to North America. It is the primary pollinator of key dietary crops, such as cranberry’s, plums, apples, onions, and alfalfa.
They are social bees like honeybees and are used for pollination only. No honey can be harvested from them.
Small bumblebee colonies are most often used in greenhouses. As with the solitary bees there are no problems with stinging, and people working in the greenhouses prefer bumblebees to fly around instead of honeybees.

(As a rule, due to the fact that solitary bees have no honey stores to protect, there is no reason for nature to have provided them with a good defence weapon like the honeybee. The females are equipped with tiny stings but rarely, if ever, do they use them. You would have to squash them to provoke them to sting – and even then, the sting on most of these bees is so insignificant that it cannot pierce human skin.)

Alfalfa honey is produced extensively throughout Canada and the United States, mainly Colorado, Idaho and Nevada. It is light in color, with a pleasingly mild flavor and aroma.
Here are some of its major features:

Flavor: is mild with no aftertaste
Color: very light with good clarity
Sweetness: not that sweet. It can be slightly less sweet than clover honey.

Antibacterial potency: low, mainly due to its peroxide feature. Much like acacia, orange, borage honeys.

Many of the health benefits of alfalfa honey are common to all honeys. The most important thing here is to make sure it’s raw (unheated) and fresh (preferably in the first 6 months after harvesting).

• Whets the appetite.
• Gives strength and energy to the body.
• Has the effect of increasing breast milk.
• Good for anemia.
• Reduces rheumatic pain.
• Reduces fever.
• Provides regular work of the stomach.
• Calms the nerves.
• Relieves headaches.
• Lowers the level of cholesterol in the blood.
• Useful in diabetes.

Some unifloral honeys like from sour-wood, alfalfa and sage stimulate the growth of five human intestinal bifidobacteria.¹
In another study honey increases both in vivo (small and large intestines of rats) and in vitro the building of Lactobacillus acidophilus and Lactobacillus plantarum, while sucrose failed to produce any effect.
It is not known if all types of honey have prebiotic effects and whether some honeys have a stronger prebiotic effect.
From all the studied honeys, by now only sour-wood, alfalfa, sage and clover honeys have been shown to have prebiotic activity.

In the study, all these honeys “were compared with sucrose, high fructose corn syrup and inulin in their ability to support growth, activity and viability of lactic acid bacteria and bifidobacteria typically used in yoghurt manufacturing. Growth and the end products of fermentation (lactic and acetic acids) were determined. Growth and acid production by organisms studied in the presence of different sweeteners were dependent on the specific organism investigated; however, it was not influenced by sweetener type, oligosaccharide content or the floral source of the honeys. All the sweeteners studied supported the growth, activity and viability of the organisms studied.²

How to use alfalfa honey?

This honey makes an excellent ingredient in homemade granola, vinaigrette, sauces and salad dressings due to its mild taste and grassy undertones. A fresh salad of baby greens  with a vinaigrette sweeten with alfalfa honey will make your guests praise the cook! It also goes well with cheese, particularly Brie, and it is great drizzled over Greek yogurt or warm waffles or biscuits.
Add it to spicy barbecue sauce for a sweet, complex glaze.
Also, it is perfect for mildly sweet marinades for fish or chicken.

Add some alfalfa honey in mustard and then dip fried tofu or chicken pieces in this mixture. Your children will love it!

As it has no aftertaste and no strong aromas, it is perfect to sweeten your tea, cereals, toast… you name it!

“Bees and their role in forest livelihoods A guide to the services provided by bees and the sustainable harvesting,
processing and marketing of their products” by Nicola Bradbear