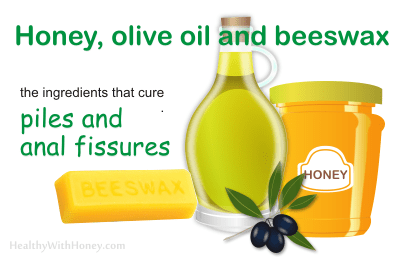 Probably the person who invented the famous phrase “like a pain in the but” had hemorrhoids. It is funny for those who never had this problems. But for the others, it’s an embarrassing subject. These people will first wonder how to cure hemorrhoids naturally, before becoming unbearable and going to a doctor.
Because no matter how you put it, the pain in the but is real.

Is honey good for piles? If it is that good in healing almost all skin problems, can’t it cure them either? Folk medicine says it can. And recently science confirmed it. Yet, do not expect any medical doctor to prescribe you honey instead of chemical drugs.

What really are hemorrhoids ? 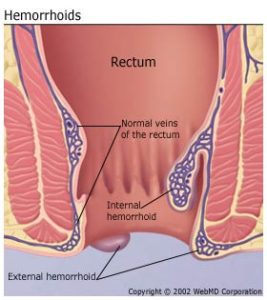 I’m sure that whoever opened this article already knows what hemorrhoids are, how painful and uncomfortable (to say the least) they are.
As a short reminder, hemorrhoids, also known as piles, are swollen veins in the lowest part of rectum and anus. Sometimes the walls of these blood vessels stretch so thin that the veins bulge and get irritated, especially when you poop. Swollen hemorrhoids are also called piles.

They can come up from everything and nobody should feel ashamed, as these days nobody believes anymore that only gay people or pervert women get them. Yes, I’ve heard these stories before, as unbelievable as it may sound, some people still think this way. (see basic causes here.)

You understand now why people are searching for a natural therapy! It is known that there are no medications that cure hemorrhoids, the only goal of medication is to relieve burning, discomfort, inflammation, irritation, itching, pain, soreness and swelling. All these can be achieved using natural products, such is the mixture described below.

Knowing how good honey is in treating wounds and other skin problems, due to its ability to fight against bacteria and to speed the recovery of wounded tissue, it is only natural to think that it can also cure hemorrhoids. And it is true, honey can do that, and though no doctor is ever going to tell you that simple honey can heal your piles, online media is full of successful reports.

To make the perfect ointment, many naturopats mix honey with other products. The most common are beeswax (which lacks chemicals and improves lubrication), propolis (which has a powerful antimicrobial action) and herbs, either as powder or as essential oils. In combination with olive oil and beeswax, honey had a very good effect on them, as it was reported in 2006 in a pilot study.

The scientists measured the bleeding, itching, edema, and erythema in the beginning, weekly and after the treatment (4 weeks).

The two patients with third-degree hemorrhoids scheduled for surgical intervention showed marked improvement within 4 weeks without the need for surgery.

Side effects were not noticed with use of the mixture in any patient recruited and no complications were experienced either.

The good results were assumed to be due to antimicrobial, anti-inflammatory, antioxidant and healing properties of the ingredients.

DIY project:
Try and do your own mixture at home, it really is not difficult. Warm the beeswax in a pan and mix, in equal parts, honey (in liquid state), beeswax and olive oil.
• Beeswax can be find on Amazon, here is a recommended one:
Beeswax Pellets 1 lb, Yellow, Pure, Natural, Cosmetic Grade, Bees Wax Pastilles, Triple Filtered, Great For DIY Projects, Lip Balms, Lotions, Candles By White Naturals

;
• Honey should be raw honey, not the pure type we find in supermarkets, but in healthy stores, or also bought from Amazon or trustful healthy stores. Multifloral or monofloral, darker if possible, here is one example: Buckwheat honey. Manuka honey is also good.
• Olive oil can be found everywhere, only make sure it is cold pressed. Organic Extra Virgin Olive Oil by Sky Organics.

○ Other remedies for hemorrhoids include:
A mixture of herbs, a vegetable-based hemorrhoid ointment, phenol oil, Ginko biloba-Troxerutin-Heptaminol, bioflavonoids, and dietary supplementation with micronized Aesculus hippocastanum, Ruscus aculeatus, Centella asiatica, and Hamamelis virginiana. The are all used as alternative treatment for patients with hemorrhoids.

Homeopatic oils have also been used successfully and some people mixed it with honey for a faster and longer relief. Here is a good one, available on Amazon.

What honey is the best for piles?
The honey widely recognized as the best in treating infected and hard to heal wounds is manuka honey. It is also recommended in hemorrhoids.
Any other type of honey is good. A good multifloral raw honey (like this one found on Amazon from
Y.S. Eco Bee Farms, Raw Honey, U.S. Grade A, 22.0 oz 4Pack (623 g)). In the above study, the research team used a multifloral dark yellow honey. The fact that it was dark suggests a high amount of antioxidants, therefore it is better to to use a darker honey, like buckwheat honey (Bee Harmony American Raw Buckwheat

Scientists say that the mechanisms of action on skin cells are deeply conditioned by the botanical sources and include antioxidant activity, the induction of cytokines and matrix metalloproteinase expression, as well as epithelial-mesenchymal transition in wounded epidermis. (Burlando B, 2013).

Here is a really funny story on how honey cured someone’s hemorrhoids, after a long time of torment.

Other references and picture source: 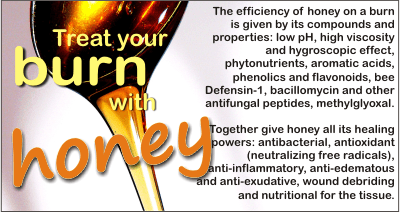 “Does honey help burns?” People are still reluctant but honey is one of the best treatments for a burn! 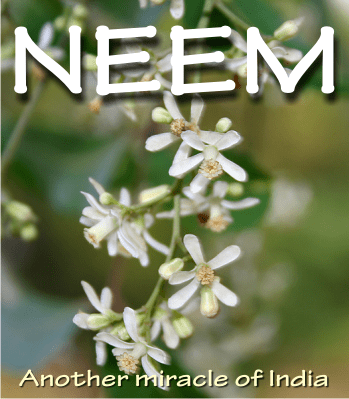 11 thoughts on “How to cure hemorrhoids naturally? Is honey good for piles?”