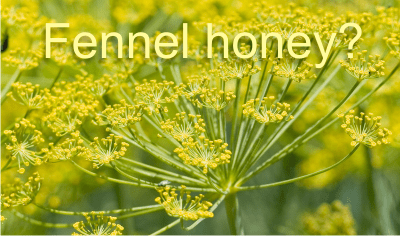 Fennel honey is quite a rare thing. We all know about fennel seeds (oftentimes mistaking them for caraway seeds) as we enjoy them sprinkled on different types of bread. And some of us know that fennel is a highly aromatic and flavorful herb with culinary and medicinal uses.

But before seeds, fennel makes beautiful yellow flowers which are full of nectar and pollen and are very attractive to honey bees.

Name: Fennel
Scientific name: Foeniculum vulgare
It is native to the Mediterranean, but is now found throughout the world, especially on dry soils near the sea-coast and on riverbanks.

Fennel is a herbaceous, perennial plant in the carrot family (Apiaceae). The growing season is 10-170 days in the first year and subsequent years, about 150 days. If sown early spring, perhaps even capitalize the first year.
The root is well developed, swivel with few lateral branches.
The stem is tall, strong branched, glabrous and fistula.
The leaves are large, sectioned, with very thin segments, like those of dill.
The blossoms are made up of umbelulas, numerous short flower stalks attached to a central green stem, from which clusters of delicate bright golden yellow flowers bloom. The flowering lasts until late autumn, when given the first frost.

Nectar and pollen: The flowers contain a light yellow to golden brown pollen and have a warm, aromatic anise scent. They are very much searched by honey bees, especially in warmer days.

The fruit is a diachene, 4-10 mm long, with specific aromatic odor and sweet taste, dehiscent at maturity. The seeds represent the reason fennel is cultivated. it contains volatile oil which has anethole – a component with therapeutic effect. Besides this volatile oil, the fruits also contain fatty acids, fiber, carbohydrates, ash.
Dried fennel seeds are often used in cooking as an anise-flavored spice.

Because of the area it originates from, fennel demands heat and light and prefers sunny areas. It has reduced claims against moisture, because it has a well developed root system and a little sweat factor. Drought and prolonged rains during the stages of flowering and fruiting can seriously affect the production.
Fennel should be grown on fertile soils rich in nutrients, with shallow groundwater.

Fennel is easily confused with anise and caraway, as they all look and taste similar and belong to the same family. Yet they are different and don’t have the same therapeutic effects (though they do share some of them). Fennel is cultivated for its dried ripe seeds and oil, which are used to make medicine. Honey is only a byproduct.
There are 4 major categories, where fennel seeds and oil are used:
– Digestive system: heartburn, intestinal gas, bloating, loss of appetite, and colic in infants;
– Respiratory system: upper respiratory tract infections, coughs, bronchitis;
– Female reproductive system: increasing the flow of breast milk, promoting menstruation, easing the birthing process, and increasing sex drive;
– Helps in treating visual problems (as the poem says).

Fennel can be found at Amazon in powder form, as capsules or as essential oil.

As with many other plants we talk about real honey and infused honey. The seeds are so healthy that they are combined with regular multifloral honey thus obtaining a superior product.

Real honey means honey made from the flowers’ nectar.

Fennel has become naturalized along roadsides, in pastures and in other open sites in many regions, including northern Europe, the United States, southern Canada, and much of Asia and Australia. It propagates well by seed, and is considered an invasive species and a weed in Australia and the United States.
In western North America, fennel can be found from the coastal and inland wildland-urban interface east into hill and mountain areas, excluding desert habitats.

For this reason fennel nectar is part of the multifloral honey. In meadows it grows next to other plants all the time, so it is very hard to obtain monofloral fennel honey.
That can only be obtain in fennel crops, grown by big producers in order to get high quantities of fennel seeds. If beekeepers are allowed to bring their hives there.

Monofloral fennel honey is dark colored, fragrant and with a taste of caramel. There are people saying they favor it to every other honey.
It crystallizes slow.

Where can we find fennel honey?

Fennel honey is very hard to find, Amazon.co.uk offers a blend of acacia honey and fennel honey, which comes in mini-jars, perfect for a wedding favor.

bodegasmonje.com is a Spanish online shop that sells fennel honey.

Fennel is not the only plant in the Apiaceae family that can provide honey. Caraway, coriander and parsley, provide a good source of nectar and pollen to honey bees, as well as other beneficial insects, including hoverflies and parasitic wasps.

Here is how to do it using fennel leaves or seeds:

– Fill a glass jar half way to the top with fresh raw honey (preferable multifloral honey, not blended honey).
– Add the leaves, chopped or whole into the jar and mix it with the honey.
– Add some more honey to fill the jar to the brim
– Tighten the lid and label the jar.
– Keep it in a dark, cool place for at least 2 weeks before eating. Warmth increases infusion of herbs into honey but it is not recommended to keep the jars because some of the honey’s health factors may be destroyed.

The best way to take is n your tea to help alleviate constipation and heartburn and to relieve the symptoms of PMS and menopause. But it can also be dribbled over hot breads and muffins and as a glaze for pork roasts and hams. Just for taste.

2. Make a similarly made licorice decoction.
– Put 1 ounce of dried licorice root into 16 ounces of cold water.
– Allow the roots to sit in the cold water for at least 1 hour or longer.
– Then gently bring to a boil and turn heat down.
– Allow to simmer for 15-20 minutes.

3. – Place 1/2 cup fennel tea and 1/2 cup of licorice root tea and 2 cups honey into the top pot of a double boiler (Bell-Marie). Heat gently until the honey and herbal teas have mixed together.
– Pour into a sterilized canning jar, label and use within one year. You can also add several essential oil drops of eucalyptus or perpermint, at your choice.

Here is a German syrup made of honey and fennel oil, to treat cough and upper respiratory conditions in children: Fennel honey AH. Already done, no need for a DIY.

What’s this trend with fennel pollen?

Fennel pollen, not fennel bee pollen, but simply fennel pollen, collected as it is by humans from the yellow flowers. Stolen from the bees. 🙂

In an article for Saveur, the food writer Peggy Knickerbocker says: “if angels sprinkled a spice from their wings, this would be it.” How poetic.
Top chefs appreciate fennel pollen as an incredibly powerful spice, with notes of licorice, citrus, and handmade marshmallows. “It tastes like pure summer joy” – they say…

On the other hand, bee pollen made from fennel pollen brings powerful health benefits to consumers. It aids in digestive, respiratory and immune system. Recommended to be taken in its raw, frozen form.
Read more on the benefits of bee pollen on our health. If you have a vegetable garden, then growing plants from the Apiaceae family (including carrot, celery, fennel, parsley and parsnip) is a very good idea. Not only for a beekeeper but also for the gardener. They are all considered companion plants.

♣ Save the bees and plant some melliferous flowers, aka honey plants!

First of all because the tiny flowers clustered into umbels, are well suited for ladybugs, parasitic wasps, and predatory flies, which actually rest on their flowers, drink nectar or reproduce. After that they prey upon insect pests on nearby plants, helping them survive better.
Some of them produce scents that are believed to  mask the odors of nearby plants, thus making them harder for insect pests to find.

And you will also benefits from using them in the kitchen. The taste and flavor of your dishes will be well improved and you will also feed your family with medicinal herbs. Numerous studies have shown that carrot, celery, fennel, parsley and parsnip, contain polyynes, an unusual class of organic compounds that show cytotoxic activities. Many species contain coumarins or coumarin derivatives, such as furanocoumarins. This means you are preventing inflammation and cancer.

One thought on “How is fennel honey?”