Gamma irradiated honey is safer than raw honey and with the same antibacterial power! 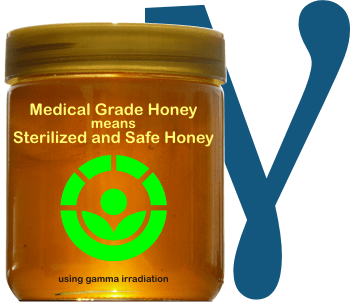 It may sound super toxic and dangerous but it is not. It is the most safe form of sterilizing honey, with minimum changes in honey’s composition. And this honey can be given to babies, too!

But if  honey has an acidity and high viscosity that can inhibit any microbial growth, why do we need honey to be sterilized? Because honey can be contaminated with spores (which contain bacteria in a conservation form) of Clostridium botulinum, Clostridium tetani, bacillus subtilis or others.
See what happens if an infant is given honey contaminated with C. botulinum. And because honey is an excellent antibacterial mostly used on infected wounds of any type.

This type of sterilization is the method big producers use to make medical grade honey.

What is radiation?
Radiation is the process by which energy is emitted as either particles or waves. It can take the form of sound, heat, or light. However, by radiation people generally understand radiation from electromagnetic waves, radio waves, microwaves and X-rays. Today we are more concerned about wireless devices than a mammography – which is somehow hilarious!

We should first know that atoms form the basic building blocks of all matter. (like a lego brick if you want). There might be trillions of atoms in a single cell. The atom has a net charge of zero, due to the nature of opposite charges attracting each other.

When radiation occurs, the atom either loses or gains an electron and  becomes an ion, carrying a charge. It will then seek bonds with other charged particles in order to regain a neutral balance, potentially leading to new molecules being formed.

Non-ionizing radiation means not enough energy to knock electrons off atoms that it interacts with or breaks chemical bonds in molecules.  Radio and microwave energy are non-ionizing radiation and are considered harmful only to the extent of the amount of heat energy it transfers to whatever it hits, which is, for example, the way microwaves cook food.

Ionizing radiation is caused by unstable atoms giving off energy to reach a more stable state, involves changing the basic makeup of atoms in cells, and more specifically the DNA molecules inside of cells, thus being more of a health threat to humans.

Ionizing radiation, which is caused by unstable atoms giving off energy to reach a more stable state, is more of a health threat to humans because it involves changing the basic makeup of atoms in cells, and more specifically the DNA molecules inside of cells. It does, of course, take a very strong dose of radiation to substantially damage a cell’s structure.

Gamma rays, X-rays, visible light, and radio waves are all forms of electromagnetic radiation. The only difference is the frequency and hence the energy of those photons. Gamma rays are generally the most energetic of these. When administered at appropriate levels all forms of ionizing radiation (electron beams, X-rays and gamma rays) can sterilize food but also objects, including medical instruments and disposables such as syringes.

Ionizing radiation may be used to kill bacteria in food or other organic material, including blood. However, food irradiation, while effective, is seldom used due to problems with public acceptance.

What is gamma irradiation?

Gamma rays are a form of electromagnetic radiation—like x-rays, but with higher energy. The radioisotope cobalt 60 is used as the energy source in gamma irradiation with the irradiation process taking place in a specially designed cell.
Gamma rays kill bacteria by breaking the covalent bonds of bacterial DNA. The unit of absorbed dose is kiloGray, expressed as kGy. The absorbed dose is determined by product density, pack size, dose rate, exposure time and to some degree by plant design.

Advantages:
· It has a high penetration capability. This enables moderately dense or sealed products to be processed with relative ease and facilitates treatment of palletized product.
· It is a process that does not generate heat or moisture.
· It has a quick turnaround time.
· There is no residual radioactivity after irradiation.
· It requires no quarantine time post processing.

Gamma irradiation is the method used for the sterilization of medical devices and pharmaceuticals (see here a list with the most common things sterilized by this method).

It does. A little. Any kind of treatment causes chemical changes in food. To different degrees.

According to a study published in 2014 by Hussein S. Z. et al., “Does gamma irradiation affect physicochemical properties of honey?“, gamma irradiation does some changes in the composition of honey.
The study analyzed the changes that took place after gamma-irradiating 2 types of Malaysian honey: Gelam and Nenas.
– Some parameters remained unchanged: pH, acidity, minerals and sugar contents
– Some parameters decrease significantly: moisture, vitamin E contents and HMF level
– Some parameters increased significantly: color intensity and vitamin C content.

The samples were tested for some hard-to-kill bacteria before and after gamma irradiation.
The honeys were tested against Staphylococcus aureus and showed no significant change in either type of antibacterial activity resulting from this form of sterilization of honey, even when the radiation was doubled (to 50 kGy).

Yes. The same study tested honey seeded with spores of Clostridium perfringens and Clostridium tetani (10000 and 1000 spores g-1 of honey, respectively) and showed that 25 kGy of gamma-irradiation was sufficient to achieve sterility.

The results showed that:
– Gamma irradiation at 25 kGy and 50 kGy (in gelam, pucuk daun, durian, manuka clement and waitemata) did not affect the antibacterial property of the honey when after irradiation honey was added into the bacterial suspension of staphylococcus aureus.
– Heat at 50° C did not reduce the antibacterial property of irradiated honey.
– All local honeys showed antimicrobial indicated for its high medicinal value.

The conclusion of the study is that that “gamma irradiation is useful to decontaminate honey from pathogenic contaminants or even to sterilise honey for safe use without any changes in its organoleptic and antibacterial property.”

• Another study from 1995, “The sterilization of honey with cobalt 60 gamma radiation: a study of honey spiked with spores of Clostridium botulinum and Bacillus subtilis.”, conducted by Postmes T et al., try to identify the lowest dose of irradiation needed for sterilization.
For this they used six batches of honey and gamma irradiated them with 6, 12, 18, 22 and 25 kGy Cobalt-60.
– All batches contaminated with Bacillus subtilis proved to be sterile after irradiation with a dose of 25 kGy.
– All baches of honey spiked with Clostridium botulinum at up to 5000 spores per 50 g honey, which is the upper limit of natural contamination were sterilized with only 18 kGy.

They are all excellent natural products, made from either manuka honey or other type of honey, with high antimicrobial properties, which were sterilized using gamma irradiation.
And yes, Manukaguard Medical Grade Manuka Honey can be given to children under 1 year old.

Gamma irradiated honey is safer than raw honey and with the same antibacterial power! was last modified: April 27th, 2018 by Laura
Laura 04/26/2018
Why can’t you give honey to babies? Sleeping above beehives – another way of treating ourselves with bees’ help

Leave a Reply to Ron