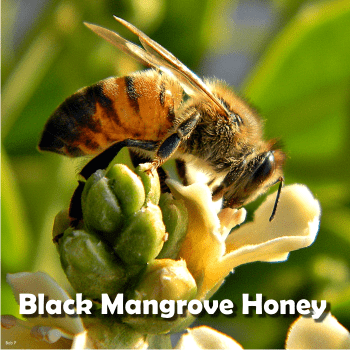 Black Mangrove honey is a unique honey with roots in salty waters. Sort of saying. Tastes like butterscotch and is good for kidney stones and hepatitis!

But because we cut the trees to build roads and commercial centers or because hurricanes destroy them, we have less and less of what was once considered a delicacy.

It is common throughout coastal areas of Texas and Florida, and ranges as far north as southern Louisiana and coastal Georgia in the United States.

Mangroves are also found in Asia, from the Sundarban mangrove forest in India and Bangladesh to the coastal mangrove forests throughout the Philippines. It’s a shrub that tolerates salted water, something that is not very common.
It has aerial roots, but not quite. They are specialized aerial roots that enable the tree to breathe air in habitats that have waterlogged soil. The roots may grow down from the stem, or up from typical roots. Some botanists classify these as aerating roots rather than aerial roots, if they come up from soil.
It’s something specific to black mangrove and grey mangrove and differentiate them from other mangrove species (white mangrove, red mangrove).

These aerating roots expel the absorbed salt mainly from the leathery leaves, especially at night and on cloudy days. That’s why the leaves often appear whitish. Black mangrove is less tolerant of highly saline conditions than certain other species that occur in mangrove ecosystems. There are mainly 3 types of mangroves and 1 companion tree in the shores. First are the red mangroves (Rhizophora mangle), found at or in the water, and endures flooding. Then comes the black mangrove, found just above the water, and can take occasional flooding well. Then it’s the white mangrove (Laguncularia racemosa), which likes the highest ground and can tolerate flooding once in a great while.
Buttonwood is not a mangrove but lumped in with them because they are companion plants.

The three species work together to stabilize the shoreline, provide buffers from storm surges, trap debris and detritus brought in by tides, and provide feeding, breeding, and nursery grounds for a great variety of fish, shellfish, birds, mussels, crabs and other wildlife. Too bad hurricanes destroy them completely and then takes them many years to regrow.

The black mangrove grows just above the high tide in coastal lagoons and brackish water estuaries. It can reach 10–15 m (33–49 ft) in height, although it is a small shrub in cooler regions of its range. The tree has seeds that resemble gigantic lima beans and small ovate leaves. They germinate in midsummer, but may be seen all year on the trees. The seeds can remain viable for over a year once released.

It blooms continually since early May till early July and attracts endless flocks of pollinators such as honey bees, carpenter bees, ants, butterflies and various flower flies.
And due to its big quantities of nectar it is also called Honey Mangrove.

There is a special relationship between mangroves and bees: mangroves have a natural resilience against forest fires; and they naturally deter termites and ants, natural competitors for bees in savannahs, meadows, orchards and other locations where bees are raised for honey production.

Average honey production from the mangrove is 25-30 kilogram per colony.

In Florida, black mangroves were offering tons of nectar and beekeeping was a very lucrative business. The production of black mangrove honey was mainly centered in the Florida Bay, where large areas of naturally occurring Black Mangroves stood. This honey was considered a local delicacy. Was?

Yes. Years ago a series of hurricanes stroke and destroyed large areas of the Black Mangrove stands. Nowadays, the Black Mangrove only grows in viable quantities in certain isolated regions of Southern Florida, and demand always far outstrips supply.

In 2017, in Florida Keys, beekeepers managed to harvest their black mangrove honey before the hit of Irma. But it did come and destroyed the trees. Many years will pass till a new harvest of honey. And some people even say that there will be no mangrove honey for the next decades. If you want to buy some, buy it now.

In Florida, Sun Splash is a registered full service nursery located in New Smyrna Beach, Florida. Among other services they grow plants and trees, and produce raw honey as registered commercial beekeepers. With over 2,000 beehives, on more than 35 sites throughout Volusia County. They are the only beekeepers in the State of Florida that have legal permitted access (issued by the FDEP) to the world famous Mosquito Lagoon, where the world’s largest concentration of black mangrove lives and thrives as Florida’s number 1 nectar producing flower!

Pay them a visit or surf through their website and then ask them if they still have black mangrove honey harvested before the hurricanes. Or, try at one of their partners: neighborhoodhive.com.

“Black mangrove honey may be the best honey that has ever touched your lips!” (Sun Splash)

Honey Feast is another company that sells black mangrove honey from Florida Keys. They place the hives along remote coastal areas and non agricultural fields and create an organic mangrove honey (The mangrove forests are not treated with pesticides and neither are the fields along them).
You can also find it on Amazon.

And from BuzyBee comes a multifloral honey made also in Florida Keys, and though it is not a monofloral black mangrove honey it has exceptionally good reviews on Amazon: 100% Raw Florida Keys Mangrove 16 oz

In Kenya, black mangrove honey is also appreciated as smooth and considered to treat several diseases.

“People prefer mangrove honey because of its medicinal value. Mangrove trees absorb a lot of nutrients from the sea and these are transferred to the nectar giving it the medicinal properties.”

According to people in Kenya some of the diseases that can be treated using the mangrove honey are:
smallpox, constipation, kidney stones, ulcers, toothaches, diarrhea, sore throat and hepatitis.

Mangrove honey is considered different and superior to other (land) honeys because the tree grows at the border between the ocean and land and are resistant to salinity and flooding, hence can withstand aridity better than territorial trees. For Kenyans mangrove trees are unique because they thrive in areas where water is poor in oxygen content, in salt water, in fresh water and in brackish water. It is said that these unique properties make the honey  particularly sweet and with added medicinal value.

In India, mangrove honey is collected not necessary using commercial beehives and performing traditional beekeeping, but using 2 other methods:
1. Collecting honey from native wild bees in forest habitat;
2. Setting-up hives made out of natural materials, which wild bees populate and produce honey.

In Asia an Apis dorsata hive can produce up to 50kg of honey annually, but this type of bee cannot inhabit regular box hives like the European Apis mellifera. Yet, the honey it produces is still harvested from its wild hives.

Unfortunately today in the Sundarbans (India) production has dropped as a result of mangrove loss to facilitate urban expansion.

Black mangrove honey is perfect for pouring over pancakes and French toast.