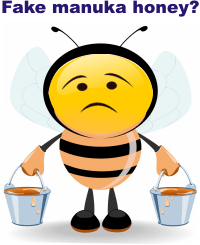 It is well-known today that raw manuka honey benefits include a wide range of healing properties. But do you know that you have 80% chances of buying a fake manuka honey?

This powerful antibacterial sweet product, with the fame of killing even MRSA, is a thick, dark-brown honey made from the nectar of Leptospermum scoparium, aka manuka tree, in New Zealand and Australia (though there is a debate whether the honey is identical or not depending on the geographical environment. see Is New Zealand manuka honey BETTER than Australian manuka honey?)

The bad news is that 80% of all the sold manuka honey is fake!

According to NZ Ministry of Primary Industries statistics, New Zealand produced 1,700 tonnes of Manuka honey in 2014, however statistics also showed that over 10,000 tonnes of honey were sold around the world labelled as Manuka honey. The bulk honey price range for mānuka honey was in 2016 from NZ$ 12.00 to 148.00 per kilogram.

– In February 2017 Fortnum & Mason, the upmarket London grocer, has cleared its shelves of its own-brand manuka honey after tests showed that it might not be genuine, because one key indicator was too low and another too high to match the manuka profile. It was selling it with £12.95 for 280g.
– Honey sold by Holland & Barrett, having a grade of 15+ (what?) and costing £25.99 for 250g, also failed the tests, on three separate counts.
– A cheaper product, Nelson­ 30+ Honey, costing £8.26 for 250g from Amazon, failed the tests, too.

Is price a good indicator?

Research commissioned by The Sunday Times has found that honey sold under the New Zealand manuka label at up to £45 ($73) a pot may not be manuka honey.
But fraudsters know this too, so they can increase the price to match a real one. Nevertheless a cheaper manuka honey is not manuka honey.

Here are some of the methods used by fraudsters to fake genuine antibacterial honey, offered by Adrian Charlton, head of chemical profiling at the United Kingdom’s Food and Environment Research Agency, a joint governmental and commercial laboratory that ensures food quality and safety in the UK:

Is this honey really manuka honey?

How is manuka honey tested?

First manuka honey has to be genuine monofloral or multifloral manuka honey, then its grading is established. We’ll see first what are the tests required to attest its authenticity.

Initially there were only 3 tests made: sensory testing, MG (aka MGO) content and pollen count. 1. Sensory testing is simple, only implying the producer’s nose, eyes and taste buds. Manuka Honey is identified based on colour, taste and smell.

2. MGO content is one of the major defining Manuka Honey. The manuka honey has a considerable amount of MGO compared to other types of honey. Its levels vary in honey over its lifespan and can fluctuate when the honey is stored at different temperatures. Unfortunately manuka honey can be faked by adding synthetic Methylglyoxal.

3. Pollen testing is not a very reliable method of checking authenticity of a honey (as it is done for the other types of honey). Hanuka tree and manuka tree make pollen that it is very difficult to analyze under a microscope. It is very easy to mix, for example, Rewarewa honey which has low pollen representation with some manuka pollen, straight from the tree and pretend it is manuka honey.

Leptosperin.
In 2014, a Japanese researcher named Yoji Kato identified a complex compound that isn’t easy to replicate. He called it leptosperin. Because leptosperin is stable during storage and is specific to manuka honey, its measurement is applicable for manuka honey authentication and its antibacterial power.  (study)

The definition of manuka honey

Due to lots and lots of fakes product on the market, other specific markers had to be found. The Ministry for Primary Industries (MPI) from New Zealand, after a work of 3 years, has released a scientific definition to authenticate New Zealand mānuka honey. MPI said the definition used 5 attributes (four chemicals and a DNA marker) that, when present in honey at specified levels, provided “clear evidence” that the honey is New Zealand mānuka honey.

How to test monofloral mānuka honey

· DNA from mānuka pollen (DNA level required is less than Cq 36, which is approximately 3 fg/µL)

How to test multifloral mānuka honey

The test for multifloral mānuka honey requires all of the 5 attributes. If the honey fails to meet 1 or more of the attributes, it is not mānuka honey. At all.

·  DNA from mānuka pollen. DNA level required is less than Cq 36, which is approximately 3 fg/µL.

Once a producer knows that a certain honey is indeed manuka honey, it begins to test it to determine its antibacterial potency. For this the most trustful manuka honey producer is a certified UMF producer, like Comvita, in my opinion. (I apologize to all the others that are also respectable and reliable producers, but do not undertake all the tests the UMFHA requires.)

UMF Honey Association uses a range of internationally recognized biological and chemical methods in approved laboratories both in New Zealand and internationally. The tests they require to grade manuka honey target the following markers:

1. Hydroxymethylfurfural (HMF) Manuka Honey must have a HMF below 40 (it increases when honey is heated, something that fraudsters do in order to increase the MGO content and darken the color of honey)

3. Leptosperin. Manuka honey has to contain a minimum level of 100. In a UMF16 leptosperin must be at least 390.

4. Dhydroxyacetone (DHA) DHA turns to MGO in time, so an initial content needs to be known.

Find out more about these markers here: How is manuka honey tested? Can we trust those tests?

What should a customer check on the jar’s label? Whenever you buy a manuka honey jar, make sure you see the following clearly written on its label:

To make sure the label isn’t lying, you can check the producer’s name in the list of certified UMF manuka honey producers, which can be found in the article Deciphering manuka honey: UMF15+, MGO400, 24+ Bio Active, KFactor16, TA. And LOTS OF FRAUDS. 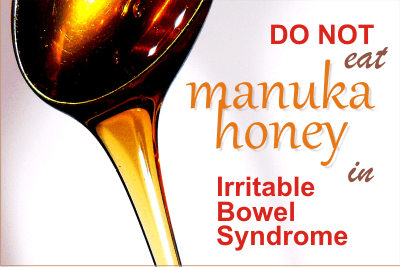 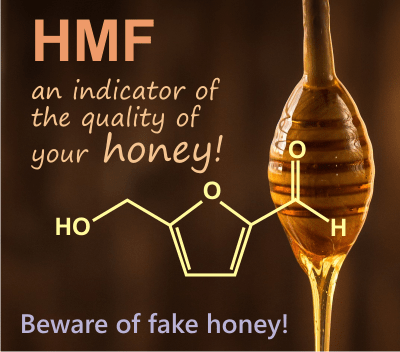 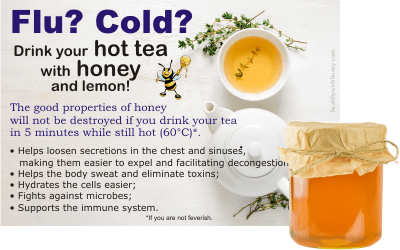 7 thoughts on “You know about raw manuka honey benefits, but do you know if your manuka honey is not a fake?”