Rubber honey is made from the rubber tree. Not from nectar found inside the flowers, or from honeydew as it happens with other trees, but from a nectar-secreting gland found outside the flower, on the young leaf petioles.

Main characteristics:
Ruber tree is a tree (not evergreen) that grows in tropical rainforests, often in areas that flood periodically growing to a height of up to 43 m (141 ft) in the wild, but  much smaller when they are cultivated, because drawing off the latex restricts its growth.
The trunk is cylindrical and may have a swollen, bottle-shaped base. The bark is some shade of brown, and the inner bark oozes latex when damaged. The leaves have three leaflets and are spirally arranged.

How do rubber trees give us rubber? What is latex?

Rubber is made from the milky white liquid that runs through its vessels. It contains one third water and one third rubber particles, held in a form known as a colloidal suspension. Natural rubber is a polymer of isoprene (also known as 2-methylbuta-1,3-diene) with the chemical formula (C5H8)n.
To put it more simply, it’s made of many thousands of basic C5H8 units (the monomer of isoprene) loosely joined to make long, tangled chains. These chains of molecules can be pulled apart and untangled fairly easily, but they spring straight back together if you release them—and that’s what makes rubber elastic. 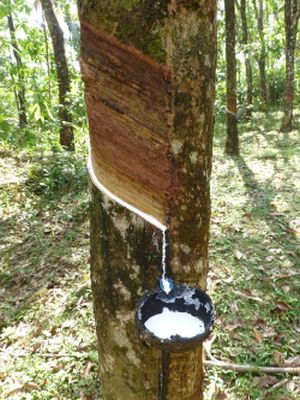 Latex is collected during a process called rubber tapping. After the harvest latex is filtered, washed, and reacted with acid to make the particles of rubber  coagulate (stick together). The rubber made this way is pressed into slabs or sheets and then dried, ready for the next stages of production: mastication (like chewing up), addition of some chemicals, squashing it into shape by rollers (a process called calendering) or squeezed through specially shaped holes to make hollow tubes (a process known as extrusion). Finally, the rubber is vulcanized (cooked): sulfur is added and the rubber is heated to about 140°C (280°F).

Collecting the latex is much like collecting birch tree sap in Russia or maple syrup in Canada. It is called rubber tapping and implies slicing a groove into the bark of the tree at a depth of a quarter inch with a hooked knife and peeling back the bark. Trees must be approximately six years old and six inches in diameter in order to be tapped for latex.

The tree requires a tropical or subtropical climate with a minimum of about 1,200 mm per year of rainfall, and no frost. Its latex production declines as trees age (30+) and is usually cut down.

Flowers:
The inflorescence include separate male and female flowers. The flowers are pungent, creamy-yellow and have no petals. The fruit is a capsule that contains three large seeds; it opens explosively when ripe.

The compound leaves of the flowers bear extra-floral nectaries on the young leaf petioles. Nectar secretion is continuous while the leaves are young and cease when they mature – nectar is thus released only during flowering periods.

The flowering period includes January to March and the flowers last 7 to 9 days. The trees are visited by many types of bees: Apis mellifera (European honey bee), Apis cerana, Apis dorsata (the giant bee), Apis florea.

Weather conditions influenced the secretion of nectar from the extra floral nectaries. Rain washes away or diluted the nectar from the leaves resulting in severe economic loss to the beekeepers. The rainfall in 2008 honey flow season negatively affected honey yield.
Devanesan, S. et al. studied in 2011 the effect of weather on rubbur honey yield and concluded that the secretion of extra floral nectaries and in turn the production of honey from the rubber plant are related to the prevailing weather and climate change especially too much rains during the nectar secreting season will be harmful for honey production.

Pollen: the pollen grains are about 28 µm in length with 3 furrowed apertures with sculptured exine. Beekeepers say this pollen may be inadequate for brood rearing.

It’s type of honey made from the nectar of rubber tree flowers. The particularity of this nectar is that it is not gathered from inside the flowers, but from special nectaries placed outside the flower, at the tip of the petiole, where the leaflets join.
The amount of nectar produced is highly variable and depends on factors including soil type, water supply, air temperature and humidity, hours of daylight, and time of day. In addition, nectar flow decreases as the flower ages (60 to 75 days).

Here are some other characteristics of Indian rubber honey after P. M. Priyadarshan in Biology of Hevea Rubber

In all the samples analyzed in the study, the levels of the trace elements were within the permissible limit set by the FAO/WHO and there was no contamination of the honeys with pesticide residues.

Due to its high content of water, rubber tree honey cannot be stored for long periods of time. It needs to be processed first (pasteurized) to ensure it will not ferment.

In order to provide an alternate source of income, the Rubber Board is encouraging bee keeping among the rubber growers. They are offered training programs, financial assistance to farmers owning rubber plantations of 0.5 to 2.50 acre. It is a lucrative business as by installing 500 hives, a farmer can get up to 10 tonne of honey. The rubber plantations in India have the potential to produce 67.886 ton of rubber honey per year.

• In Malaysia, the stingless bee keeping, also known as meliponiculture is also encouraged in rubber growing areas, with the same purpose of enhancing rural livelihoods and combating poverty. Keeping stingless bees is much easier than working with regular hives of Apis Mellifera and honey production is lower, yet stingless bees colonies produce honey, pollen cerumen and propolis, which help a lot with health and daily life. For rubber smallholders, who depend on the fluctuating price of rubber, it is a good asset. (Shamsul Bahri, 2016)

Where can we find rubber tree honey?

That’s a hard question if you are not from South Asia. Due to its high moisture content this type of honey needs to be processed (especially pasteurized) and there are not big producers to export this honey around the world. It does not have outstanding health qualities (like sourwood or manuka honey) to make worth the effort. Small rubber farmers produce it and it is mostly sold locally.
If you want to taste some, here is some Indian rubber honey found on FB: Vanamithra Honey. Amazon doesn’t sell it. Not even the Indian branch.

Evaluation of physicochemical and antioxidant properties of sourwood and other Malaysian honeys: a comparison with manuka honey by Mohammed Moniruzzaman et al, 2013

One thought on “What is rubber honey?”