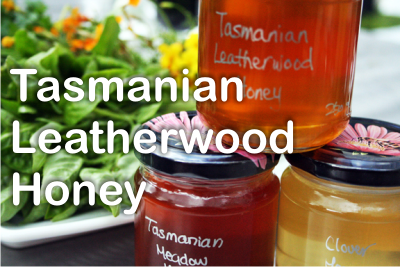 Leatherwood honey comes from Tasmania and is one of its rarest and finest honey.

Leatherwood (Eucryphia lucida) is a tree that grows in the forests of Tasmania’s wild west coast, from the northwest in such places as the Tarkine and through the South West Wilderness. It likes water a lot which is why it grows very well in climates of 1500–2500 mm annual rainfall.

Most of these trees are difficult to access, as they grow really deep in those forests. Human settlements are few and far between, and the region is rich in flora and fauna, containing many rare and protected species.
To make the leatherwood honey, beekeepers (from the Tasmanian Honey Company) camp in the forest during the leatherwood harvest, which occurs between January and March.

The tree originated nearly 65 million years ago and it usually reaches from 2–10 metres (6–30 feet) in height and sometimes even 25 metres (80 feet) in favorable conditions. it has small dark green glossy leaves, elliptical in shape and 2–4 cm (1-1.5 in) long.
The trees are used both in horticulture and apiculture an for many years, the Tasmanian Beekeepers’ Association has had to lobby the Tasmanian government to ensure continued access to this precious resource, and to protect it from logging.

The flowers are white, with a sweet scent and considerable nectar. They have a diameter of 2.5 – 4 cm, four petals and resemble small single roses. The blossom appears in spring and summer, and in autumn the flowers mature in leathery capsules (and from here probably the name of he tree “leatherwood”). The flower parts are often covered with a sticky sap.

But flowers do not come that easily. The trees under 75 years old generally don’t flower and thus there is no nectar for the bees. The most prolific flowering trees are more than 100 or 200 years old.

Tasmania is a small southern Pacific island you heard of as Tas or Tassie. It’s an island state of the Commonwealth of Australia, located 240 km (150 mi) to the south of the Australian mainland and it is considered to have one of the world’s cleanest air and waters, with most primitive, ancient and unspoiled forests.
Some of them are the oldest forests in the world and are considered so valuable that over 2.5 million acres are protected as a World Heritage Site.

Letherwood honey is specific to this island, found only here, just like the endangered Tasmanian devil, which is familiar to us from the Loony Tunes character, Taz. (click on the picture to enlarge it)

Leatherwood is the single most important nectar plant in Tasmania, giving about 70% of all honey produced. Other sources of nectar giving good quality honey include clover (in pasture), eucalyptus blossoms and blackberry. It has been supporting the export economy of Tasmania for over 100 years.

Many of the apiaries in Tasmania are family business which have been passed on for generations, like the two families: the Jones and the Stephens. They have been involved in the Leatherwood apiary business since the early 1940’s and early 1930’s respectively.

Annual production of honey is fairly stable at 1000 tons with a value of $1.5million. As a result of the gourmet and premium image promoted by the honey industry a large proportion(45%) of Tasmanian honey is exported internationally with the rest being consumed locally and interstate.

The bees that make this honey are the Italian ligustica bees, which is a subspecies of the western honey bee (Apis mellifera). They were introduced to Tasmania in 1884. In this area, the Italian bees perform better than other bees which have largely died out. The Italian race is better behaved (ie. more docile), builds up rapidly in the hive and is capable of rearing broods late into the honey season.

Leathewood honey is a monofloral honey that has been recognized by the international Slow Food movement in its Ark of Taste. It can be produced from two types of Leatherwood in Tasmania, Eucryphia lucida and Eucryphia milliganii, both occurring as understorey species. E. lucida is the most common and most important species to the Leatherwood honey industry. E. milliganii is less common and tends to replace E. lucida at higher altitudes and in more exposed sites.

Color: ochre-yellow
Flavor:  very fine with a subtle spice and savory quality, sometimes picquant and delicious or even musky. It reaches all the way to the back of your throat and propels you along in a full bodied taste experience!
Aroma: robust, floral, complex and distinct
Taste: many Tasmanian’s say that leatherwood ‘tastes like the wilderness’, buy the International Slow Food Movement describes it in the following way :

“Leatherwood honey is slightly liquid with uniform crystallisation, a smooth creamy texture and an ochre-yellow colour. The perfume is intense with notes of balsamic scents, which develops quickly into clean fresh notes of citrus fruits and white flowers. The flavour is clean and fresh, very balsamic, with lightly spicy notes in its long finish. Overall, the sensation of eating this honey is very pleasurable: it is creamy, buttery, low in acidity and melts in the mouth.”

Crystallization: into very fine crystals but getting quite firm, which is why it is best appreciated in its liquid, creamy form.
Texture: creamy and smooth
Sweetness: not very sweet
Acidity: low
Sugars: levulose and dextrose
Vitamins: low content
Antimicrobial activity: medium
Aftertaste: yes, lingering with spicy notes

It also have been compared to “the single malt whiskies of Scotland”.

It has been described by one Tasmanian leading beekeeper as “a distillate of our ancient wilderness” and when you warm a little of our unscented moisture cream between your hands you can actually breathe in the smell of the rainforest.

Tasmanians have always been using this honey as a cure for hang-over. Generally, honey is known to be an excellent detoxifier of liver, being recommended to be taken before the drinks, and immediately after. See here the post on this subject: Alcohol detoxification with honey.

Tasmanians also used to treat burns and use it as an antiseptic for cuts. Somehow, without an “online connection” like today, in all parts of the world, no matter how far or apart they are, honey has always been used for wounds and other skin conditions.

Unfortunately this type of honey hasn’t been researched enough and we cannot tell now which are the health benefits that differentiate it from other honeys.

Researcher Charles Dragar, a Tasmanian scientist, says leatherwood honey might be used like manuka honey to heal wounds and boost the immune system. Well, this is a feature common to all honeys, though, yes, manuka honey is the best to heal a wound.

Where can we buy Tasmanian leatherwood honey?

Leatherwood honey may be bought either in its normal form or as a creamed (aerated honey). Connoisseurs say it’s a fabulous spread for bread, toasts and waffles and perfect match with cheeses, cordials and teas.

We can find them on local producers like The Stephens family, or on Mathernature.com.au and on so many others.

How do beekeepers get their hives into the deep rainforest?

I said before that beekeepers transport their hives into the forests of the World Heritage areas in the West and South of the state. But there is no road access there!

So, to access this remote area, special rail carriages have been built, that will carry the beekeepers’ trucks, with their hives. It’s the world famous ABT funicular railway to Teepookana via Strahan, built by pioneers through the inspiring and backbreaking terrain over 100 years ago, that helps them do that.

It’s what one of the most trustful beekeepers in Tasmania have done. The Stephens family from Mole Creek have built special flatbed rail carriages that will carry their trucks. The honey they collect is remarkable and recognized as one of the best leatherwood honey.

They are also very honest. All their certifications are available online and when they cannot sell you honey, they simply  tell you that: “Honey in short supply, due to weather.
NO EXPORTS and VERY LIMITED LOCAL STOCK”  Yet, do check their website from time to time. The weather is always changing!

And if you want to take a closer look at the beauty of a Tasmanian land and forest, go take a tour with their steam train at West Coast Wilderness Railway. You’ll have an experience never to forget! To get an idea, just take a look at the video below.

Have you had the chance to taste leatherwood honey?

2 thoughts on “What is leatherwood honey?”