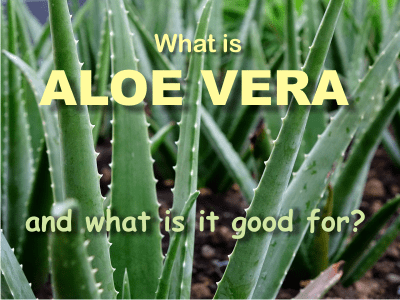 What is aloe vera? It’s a a spiky cactus the Chinese call “the elixir of youth” and the Egyptians praise as “the plant of immortality”. Its applications have been recorded in ancient cultures of India, Egypt, Greece, Rome and China. As for what is aloe vera good for, we can start by saying that today it is used in many products such as fresh gel, juice and other formulations for health, medicinal and cosmetic purpose.

ALOE VERA, on its legitimate name Aloe vera (L.) Burm f. (according to the International Rules of Botanical Nomenclature), originates from tropical Africa and it is now now cultivated in all warm climatic areas of Asia, Europe and America. There are more than 420 species of aloes in the world and at least two other species have medicinal properties Aloe perry baker and Aloe ferox.

Best known for its remarkable skin effects, including soothing, moisturizing and healing properties, Aloe vera is used in facial tissues (moisturizer and anti-irritant to reduce chafing of the nose), makeup, tissues, moisturizers, soaps, sunscreens, incense, shaving cream or shampoos. It is the product with one of the best “moisturizing emollient effects” used in cosmetics. 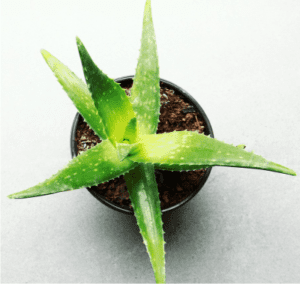 In food industry it is used as an ingredient in yogurts, beverages and some desserts. When the gel is consumed raw, in juice, great care should be taken because at certain high doses, its toxic properties could be severe when taken orally.

Medicinally, Aloe vera juice is best known to support the health of the digestive system and recent studies showed that it has a broader therapeutic activity.

Early records of Aloe vera use appear in the Ebers Papyrus from the 16th century BC, and in Dioscorides’ De Materia Medica and Pliny the Elder’s Natural History – both written in the mid-first century AD.  It is also written of in the Juliana Anicia Codex of 512 AD.

In Traditional Chinese Medicine it is known as Lu Hui (in Mandarin). The Chinese Materia Medica, teaches us that aloe vera is bitter in flavor and cold in properties and covers meridians of liver and large intestine. its main functions are purgation, removing heat from the liver, and killing parasite.
Essential aloe vera gel uses and indications include constipation caused by heat accumulation, headache due to liver-fire, bloodshot eyes, convulsions, parasites causing abdominal pain, scabies, hemorrhoids, and croton oil poisoning. Recommended dosage is from 0.6 to 1.5g in pills or powder.

In Ayurvedic medicine it is called Kumari (The Sanskrit name meaning young girl). This name evolved from the fact that Aloe Vera is widely used in both menstrual problems and skin problems in young women. Also, the plant looks young even when it is old.
According to Ayurveda aloe vera balances all three doshas and is cold in potency. This herb is widely used in the treatment of constipation, skin problems, bleeding disorders, wound healing and diseases due to Pitta aggravation.

What does science say about aloe vera?

Traditionally aloe vera is used in a very long list of diseases and conditions. Some of them and how to use aloe have been gathered from the Russian and Siberian folk medicine and can be read here: What about aloe vera benefits when combined with honey? Here are 13 recipes that may help.

It is a clump forming perennial plant with thick fibrous root which produces large basal leaves, usually 12–16 per plant, weighing up to 1.5 kg when mature.
The plant matures when it is about 4 years old and has a life span of about 12 years.
The leaves are up to 0.5 m long and 8–10 cm across at the base, tapering to a point, with saw-like teeth along their margins.

The leaf pulp is harvested for consumption. The leaves should be sound, undamaged, mold free and mature (3–4 years) in order to keep all the active ingredients in full concentration. The plant can be harvested every 6–8 weeks by removing 3–4 leaves per plant.

Flowers. Red, yellow, purple or pale stripped flowers are present most of the year growing in a long raceme at the top of the flower stalk which originates from the centre of the basal leaves. The flower stalk grows up to 1.5 m in height. The flowers produce nectar, not very much but enough for the honey bees to produce aloe vera blossom honey. It’s a rare type of honey found more in India.

The fruit is a triangular capsule containing numerous seeds. The plant is practically disease free, occasionally black spots may occur on upper surface because of fungal infection or soft rottening may damage whole plant.

How to extract the gel from aloe vera leaf

Many people grow aloe plants in pots, at home. It can be used for small skin problems such as cuts or burns. What’s important is how you use it. Don’t cut off the tip of a leaf and then squeeze out the gel. This practice releases the toxic aloin along with the gel, resulting in irritation.
Instead of squeezing, cut the aloe leaf at the base of the plant, slip on a pair of plastic, non-latex gloves and fillet the aloe vera leaf with a sharp knife.
Once the aloe vera leaf is opened into two halves, scrape the top layer of clear gel from the leaf using a butter knife. Leave behind the lower layer of gel, closest to the skin. Store the gel in a plastic bag in the refrigerator and toss out the rind.

So, what is aloe vera gel? The translucent pulp. Not the juice/sap that drops after you cut the leaf. This one is toxic, do not ingest it.
The commercially name aloe vera juice is produced from pressing/blending the pulp (called gel). Usually the juice we can find in stores is made from the whole plant, sap included, so high amounts are not recommended. Besides, its medicinal and nutritious properties are lost during processing, so the best juice is the one we can make at home, blending the gel. (if you are interested in its medicinal effect, the leaves should be at least 3 years old)

There are as many as 200 different types of molecules in aloe vera. (Davis 1997). The aloe vera leaf gel contains about 98% water. The total solid content of aloe vera gel is 0.66% and soluble solids are 0.56% with some seasonal fluctuation.
On dry matter basis aloe gel consists of polysaccharides (55%), sugars (17%), minerals (16%), proteins (7%), lipids (4%) and phenolic compounds (1%). It contains many vitamins including vitamins A, C and E. Vitamin B1 (thiamine), niacin, Vitamin B2 (riboflavin), choline and folic acid are also present (Lawless and Allen 2000). Some authors also suggested the presence of vitamins B12 (cyanocobalamin) in trace amounts which is normally available in animal source (Coats 1979; Atherton 1998).

The compounds that give aloe vera its medicinal properties have been identified as:

Used externally aloe vera is safe. If you are allergic to latex, then the yellowish juice (sap), also known as the plant’s latex, should not get in contact with your skin. It contains a natural chemical called aloin, which is a type of anthraquinone glycoside. According to North Carolina State University this substance may irritate your skin if you have an allergy to latex.

That’s why when using aloe vera we should not cut it and then squeeze the juice on the skin. The juice should be let to drain off the leaf, wash it well and then the “gel fillet” is extracted with a knife. 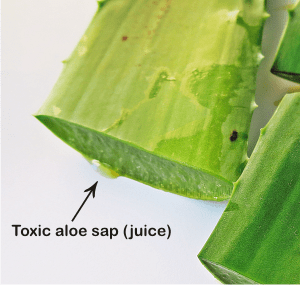 When used internally, it is recommended not to use aloe vera products during pregnancy or lactation period and by persons suffering from abdominal pain, appendicitis or intestinal obstruction.
When consumed in large quantities it can lead to abdominal cramps and diarrhea. Serious bouts of diarrhea in young children and animals may result in loss of electrolytes and dehydration.

Recently, Aloe vera whole leaf extract showed clear evidence of carcinogenic activity in rats, and was classified by the International Agency for Research on Cancer as a possible human carcinogen (Group 2B). This review presents updated information on the toxicological effects, including the cytotoxicity, genotoxicity, carcinogenicity, and adverse clinical effects of Aloe vera whole leaf extract, gel and latex. (study)

Where can we find aloe vera?

The simpler way is to grow it yourself, in the garden if you live in a warm area, or in a pot at home, in a moderate sunny place. On Amazon we can find a good book on how to grow it:
Aloe Vera And Aloe Aborescens: How to grow, care for and use your medicinal plants for better health!.

Aloe vera is commercially available in many forms. If you are interested only in the juice obtained after blending the fresh gel from the leaves, Amazon also sell it. Alone, which can be used internally (Natural Brand Aloe Vera Juice) or in combination with other medicinal plants, mostly for external use (Organic Aloe Vera Gel by Seven Minerals – 100% Pure Organic Aloe, With No Toxic Chemicals Or Preservatives – For Healthy Skin, Hair, And After Sun Relief)

Processing, food applications and safety of aloe vera products: a review, by Kulveer Singh Ahlawat and Bhupender Singh Khatkar, from G. J. University of Science and Technology, India, published in 2011 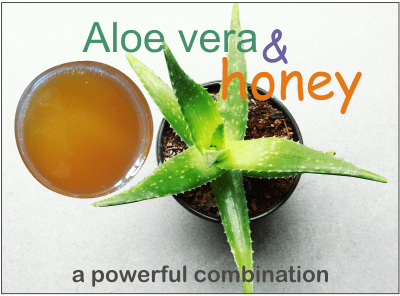 What about aloe vera benefits when combined with honey? Here are 13 recipes that may help.

One thought on “What is aloe vera and what is it good for?”