The phrase “medicinal honey” refers to honey in general and also to “medical grade honey“. Malaysia is proud of having 3 exceptional types of medicinal honey: tualang, gelam and kelulut honeys, all produced by wild bees. (the first 2 by Apis Dorsata and the third by Trigona spp.) They are all considered medicinal honeys and science confirmed it.
Here are the health benefits of natural honey from Malaysia (tualang, gelam, kelulut, acacia, longan, pineapple, durian, sourwood, rubber tree or jungle honeys), as reported in recent studies:

see What types of honey can we find in Malaysia?

The results show that gelam, kelulut and tualang, have high antibacterial potency derived from total and non-peroxide activities, which implies that both peroxide and other constituents are mutually important as contributing factors to the antibacterial property of honey.

Malaysian honeys a full of vitamins and minerals. 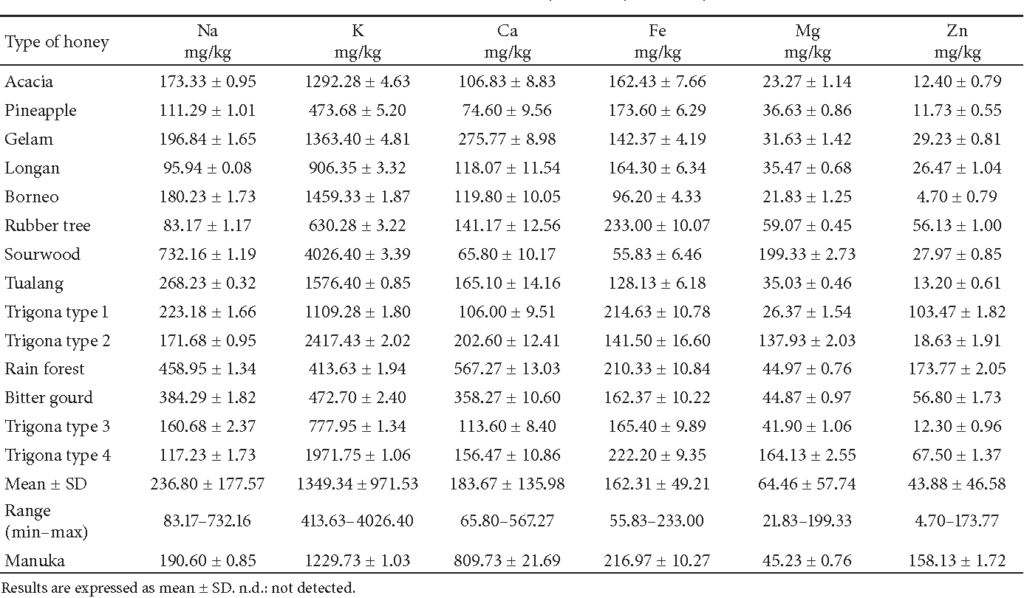 The results showed that both types of honey can scavenge free radicals and exhibit high antioxidant-reducing power. Gelam honey exhibited higher antioxidant activity (p < 0.05) than Nenas honey, which is in good correlation (r = 0.9899) with its phenolic contents.

Most interesting was the fact that after gamma radiation both honeys had higher antioxidant activities and total phenolic and flavonoid contents.
The phenolic compounds such as: caffeic acid, chlorogenic acid, ellagic acid, p- coumaric acid, quercetin and hesperetin as indicated by HPLC method were found to be higher in Gelam honey versus Nenas honey. In conclusion, irradiation of honey causes enhanced antioxidant activities and flavonoid compounds. This is the case of all medical grade honeys, which undertake gamma radiation.

• 4 types of Malaysian honey: gelam, longan, rubber tree and sourwood honeys were compared to manuka honey regarding their physicochemical and antioxidant properties.

Eight healthy volunteers participated in the study and the results showed that the mean AUC of the Malaysian and Australian honeys, 174+/-19 and 158+/-16 mmolxmin/l, respectively, did not differ from each other but were significantly less than that after glucose, 259+/-15 mmolxmin/l (P<0.001).

(The GI, glycemic index, represents the rise in a person’s blood sugar level two hours after consumption of the food. The table sugar, sucrose is 65. Glucose is 100.)

• Gelam and Acacia honey were investigated in a study from 2017, regarding their efficiency in reducing excess weight gain and other parameters related to obesity. The study used male Sprague-Dawley rats which were induced to become obese using high fat diet (HFD) prior to introduction with/without honey or orlistat for four weeks.

Similar results were also displayed in rats treated with orlistat, but with hepatotoxicity effects.
In conclusion, consumption of honey can be used to control obesity by regulating lipid metabolism and appears to be more effective than orlistat.

What are the health benefits of eating honey from Malaysia? was last modified: September 19th, 2018 by Laura
Laura 08/12/2018
What types of honey can we find in Malaysia? What is nenas honey?