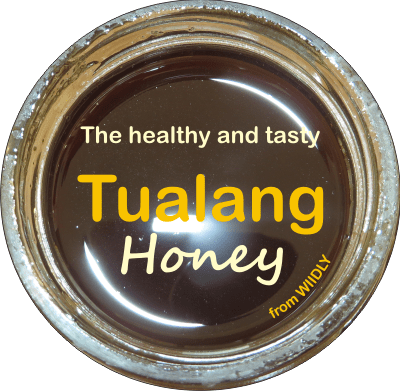 Rainforest honey is also known as tualang honey. An exotic honey, produced in completely different conditions than our regular honey. What it is more interesting is that plenty of scientists say its properties are similar to the well-researched manuka honey, even more effective against some gram-negative bacterial strains in burn wounds.

It was proved to have antimicrobial, anti-inflammatory, antioxidant, antimutagenic, antitumor, and antidiabetic properties, of course in addition to wound-healing attributes. Recent studies pointed out its effectiveness in the treatment of breast cancer and leukemia.
Highly recommended in postmenopausal state tualang honey is considered by some to be the natural equivalent of hormone replacement therapy.

Yesterday I received a jar with this ambrosia from Wiidly, a well-known company that sells honey harvested from the rainforest of Taman Negara – The National Park of Peninsular Malaysia.

This honey reminded me of our European forest honey, the one we also call honeydew honey, though enriched with a gingerly exotic touch. It is not that sweet and has a smoky flavor and a stingy aftertaste.
It was not crystallized, like honeydew honey is always (for at least 2 years).

It’s different than manuka honey. It’s darker (which indicates the presence of more antioxidants) and more runnier. This is due to its higher water content, around 23.3%, because in Malaysia rains a lot more than in New Zealand (manuka honey has 18.7% water content).

The only downside of this jar of honey is that it is too small for my honey appetite. I’m continually tasting it and I’m afraid it won’t last to be enjoyed in my favorite Greek style: sprinkled over goat yogurt with walnuts….

Here are the main differences between regular honey and rainforest honey:

But the moisture is the first thing that strikes us when seeing it. In the jungle there is a lot of moisture. It rains a lot. The nectar of flowers contains more water than we usually find in flowers from arid areas. Both types of honey produced in the jungle of Malaysia, the tualang honey (made by the giant wild bees) and kelulut honey (made by the tiny stingless bees), the first produced from the biggest flowers of the jungle, the latter from the smallest ones, are very liquid. With a high water content.

Honeys with high water content tend to ferment, to spoil. To prevent this, the sellers of kelulut honey pasteurize it. Wiidly company does not pasteurize its tualang honey, but still uses a machine to dry it a little. They keep the honey on wide trays in a special room and use a dehumidifier called honey-drier to force honey to evaporate. (It’s a process that mimics the fanning of the honey bees while maturing the honey.)
This manual process is slow and can take up to 2 weeks, depending on the amount of honey. This is a standard moisture-reducing procedure also practiced by beekeepers worldwide, including Europe.

Tualang is the name of Asia’s tallest tree (growing up to 80 meters high), Koompassia excelsa, also known as Tapang, or Mengaris. It is found in the lowland rainforests of southern Thailand, Peninsular Malaysia, Northeastern Sumatra, Borneo, and Palawan. The bees make their combs high on its branches, far from the predators of the jungle. Their only enemies are the big birds and humans. And the Tropilaelaps mite, a devastating parasite with an expanding distribution. (more here.)

The bees that produce this honey are called Apis dorsata and though they look very similar to Apis mellifera, are almost twice the length of them, reaching up to 3 cm (1.2 in). That’s why they are called “the giant honey bees”. They are found throughout the southern countries of Asia, including Malaysia, Indonesia, and the Philippines and are considered one of the most dangerous animals of the southeastern Asian jungles due to their threatening defensive behaviors.

Apis dorsata builds open nests that hang from under thick tree branches or under cliffs. They build a single large comb up to 150 cm in length and 70 cm tall. The comb is permanently covered by a curtain of up to 100,000 worker bees. This curtain is several layers of bees thick and forms a protective barrier separating the vulnerable brood from the environment. This curtain is sufficient to protect the nest during storms with heavy wind and rain. 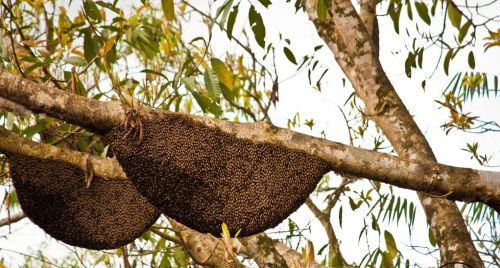 Some of the larger colonies can contain up to 15 kg (33 lbs.) of honey. In addition to honey, the wax and bee brood are also sold at a significant price.

Due to their large size Apis Dorsata have a greater flight and foraging range than those of other honey bee species. They perform seasonal long-distance migrations in order to exploit the nectar and pollen resources available at different times throughout many parts of southern Asia and collect nectar only from the bigger flowers found in the jungle. That is why, the honey they produced is so much different that the one produced by their tiny relatives, the stingless bees – which collect from the smallest flowers of the jungle and make what we call kelulut honey, or trigona honey.

Apis dorsata are considered the most defensive of all of the honey bees, even more defensive than the African honey bee. Their main weapons are stingers that are up to 3 mm long and easily penetrate clothing and even the fur of a bear. But like Apis mellifera, after the sting they will die, too. But unlike them, Apis Dorsata will also buzz loudly and bite the threat to deter it, without risking the life of many individuals. Clever girls! 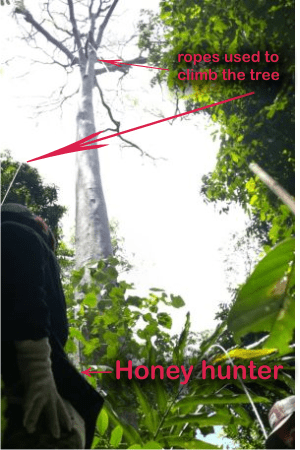 These smart and dangerous bees have developed 2 effective colony defense systems to protect their exposed combs.
1. An alarmed guard bee will fly back to the nest and, with an exposed stinger, run in a zigzag pattern along the curtain of bees. The bees will then run to the lower rim of the comb and create large thin chains of bees while making a hissing sound. This act not only prepares the guard bees for attack, but also makes the nest look larger than it is. This defense is particularly useful against bird predators that try to rip sections of brood from the comb, because the birds often attack the bottom of the comb, grabbing only handfuls of bees.

2. Shimmering. Shimmering involves a display of waves which moves across the surface of the nest in a fraction of a second as the bees raise their abdomens in a sequential order. These waves originate from individual bees which perceive a predator and raise their abdomen first, invoking a similar response from the surrounding bees. The visual display of shimmering is thought to intimidate potential threats such as predatory wasps, birds, and mammals.

Traditional honey gathering is usually done on a moonless night to minimize the number of flying bees once the colony is disturbed. They use ropes or ladders to reach the top of the trees and a flame is used to knock the bees off of the comb.

At Wiidly things are different. The harvesters collect the honey during daytime, mostly to avoid the dangers brought by the night (elephants, wild boars, bears and tigers, snakes, spiders and so on). They set their camp on flat land (though the jungle is more hills and streams) usually within 45 – 1.30 hours of walking from the harvest area. The camp site is usually set near the water source rather than near the tree as the bees are extremely territorial and violent. Having a tent near their colony would be simply asking for trouble.
If the honey to be harvest is too much, the length of the harvest will be extended, a few group members would go back to facility to filter the honey and remove the bees and honeycomb from the honey first. The separation must be done immediately to ensure honey quality is at its best.

In Taman Negara the honey hunters harvest the combs following the bee migration. There are different blooming seasons in the tropical rainforest and at the end of each flowering season in a specific area, the bees will migrate to another area where different types of plants start blooming, forming another colony on different trees nearby the area. The harvesters take all the combs nearing the end of the flowering season, when the bees are about to migrate. But if the flowering season for some flowers is still on, the harvesters take will take roughly around 50% or lesser, leaving the rest for the bees to grow their brood.

The rainforest of Taman Negara

The National Park is considered as one of the oldest land mass in Peninsular Malaysia, of more than 130 millions years old. it stretches on 3 Malaysian states (Pahang, Kelantan and Terengganu) and covers 4,343 km2 . Three main river systems spring from this National Park, which is considered a hotspot for biodiversity as it hosts many species of flora and fauna, many of them endemic, rare, vulnerable or otherwise threatened in Malaysia.

The floral source of tualang honey

The National Park is considered as one of the richest area in term of plant species and genetic diversity and hosts more than 3,000 species of plants. The giant bees only visit the big ones, which are plenty considering the equatorial climate of Malaysia: hot and humid throughout the year. The average rainfall is 250 centimeters (98 in) a year and the average temperature is 27 °C (80.6 °F).

There are 246 species in 26 families such as Selaginella wildenowii, S. mirabilis, S. scabrida, S. selangoriensis, Lycopodium carolinianum, Asplenium nidus, Tectaria faurei, Hymenophyllum serrulatum, H. exsertum. There are also ginger species such as Etligera littoralis, Zingiber spectabile and E. venusta and the latter is endemic to Peninsular Malaysia. (Probably the taste of ginger I sensed in my tualang honey comes from one of those plants)

read more about the Properties of Tualang Honey

Why to buy Tualang Honey?

Because it is really healthy. And tasty. Even if you are in a perfect state of health you can still benefit from it, because honey is preventative in the first place. There are also some specific conditions that have been researched to respond well to tualang honey.

It was concluded that Tualang Honey had the capacity to induce apoptosis of both myeloid leukemia cell lines with minimal effect on the normal mononuclear cells. The apoptosis activity could be attributed by few possible compounds such as flavonoids.

It protects midbrain and lungs against dopaminergic neurotoxin exposure

• Tualang Honey Protects the Rat Midbrain and Lung against Repeated Paraquat Exposure., by Tang SP et al., from 2017, showed that treatment with Tualang honey may protect against Paraquat induced toxicity in the rat midbrain and lung. 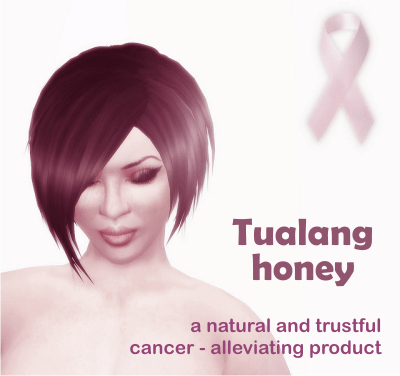 • The study Protective Role Of Quercetin: Antioxidants May Protect Cancer Cells From Apoptosis And Enhance Cell Durability, by Dr. Zafer Akan et al., published in 2011, showed that reduction of superoxides by the free radical scavengers such as quercetin (present in tualang honey) could be beneficial for prevention of cancer but consumption of flavonoid free radical scavengers during cancer treatment may weaken effect of the chemotherapeutics and radiotherapy.

Honey with high antioxidant properties are more beneficial in preventing cancer, than in treating it!

Review of the Medicinal Effects of Tualang Honey and a Comparison with Manuka Honey, by Sarfarz Ahmed and Nor Hayati Othman, 2013;