Propolis is a natural supplement for asthma management. 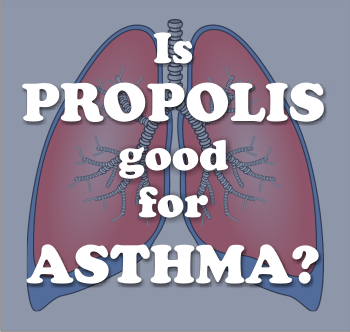 Propolis is a very efficient natural supplement for asthma management. Studies have also proved its beneficial effects on chronic obstructive pulmonary disease and lung cancer, but only recently researchers proved it is good for asthmatic people, too.

Asthma is a chronic inflammatory disease affecting the air passages that carry air from the nasal area and mouth to lungs and vice versa. When having asthma, a person finds it difficult to breathe, feels suffocated and congested.

Nobody knows exactly what is the cause of asthma. Probably because it can appear in different circumstances, from different causes: allergies, air pollution, respiratory infections, emotions, weather conditions, sulfites in food and certain medications. Common symptoms include coughing, wheezing, shortness of breath and chest tightness.

Our traditional folk medicine tells us that propolis is good for the entire respiratory system as well as for the digestive one. When it comes to asthma, propolis is known to be a reliable product to ease the symptoms. But how many of these are mere claims and what does science have to say about this? Well, it seems our researchers did their job and sift these claims through their rigorous scientific thieve.

Propolis extract was studied intensely and proved to be efficient in asthma management. There are numerous studies, on animal models but not only, and there are clinical trials that showed its potential in treating asthmatic humans.

• A 2003 study, A clinical pharmacological study of the potential beneficial effects of a propolis food product as an adjuvant in asthmatic patients, conducted by Khayyal MT et al. from the Department of Pharmacology and Toxicology, Cairo University, Egypt, researched the effects of aqueous extract of propolis, given as a nutritional food product and administered, as an adjuvant to therapy, to patients with mild to moderate asthma, daily for 2 months, in a comparative clinical study, in parallel with a placebo preparation.

The patients were already on oral theophylline as controller therapy, none was receiving oral or inhaled corticosteroids, none had other comorbidities necessitating medical treatment, and all were from a middle-class community and had suffered from asthma for the last 2-5 years.
There were 2 groups, one made of 24 patients received the placebo, with one drop-out during the study, and the second, with 22 patients, received propolis extract, with no drop-outs. The age range of the patients was 19-52 years; 36 were male and 10 female.

The researchers recorded the number of nocturnal attacks on a weekly basis, and tested their pulmonary functions at the beginning of the trial, 1 month later and at the termination of the trial.
Analysis of the results at the end of the clinical study revealed that the  patients receiving propolis showed a marked reduction in the incidence and severity of nocturnal attacks (from an average of 2.5 attacks per week to only 1.) and improvement of ventilatory functions (early 19% increase in FVC, a 29.5% increase in FEV1, a 30% increase in peak expiratory flow rate (PEFR), and a 41% increase in the forced expiratory flow rate between 25 and 75% of the vital capacity)

The conclusion: “The findings suggest that the aqueous propolis extract tested is potentially effective as an adjuvant to therapy in asthmatic patients. The benefits may be related to the presence in the extract of caffeic acid derivatives and other active constituents.”

• A 2016 study “Caffeic acid phenethyl ester alleviates asthma by regulating the airway microenvironment via the ROS-responsive MAPK/Akt pathway.” by Ma Y et al. from the Department of Respiratory Medicine, the First Affiliated Hospital of Nanjing Medical University, 3 Nanjing, China, have demonstated the effects of CAPE on the respiratory system of mice.

CAPE means caffeic acid phenethyl ester and is an active anti-oxidative component obtained from propolis. The latest studies have already shown its beneficial effect on several respiratory disorders, such as chronic obstructive pulmonary disease and lung cancer. The Chinese researchers have studied now the effects of it on asthma. The mice study was done on mice and the results showed CAPE to be a potent agent for asthma management. How did this happen?

For those of you who understand this language, here is what the scientists said: “CAPE significantly limited the secretion of eotaxin-1, monocyte chemoattractant protein-1, IL-8 and intercellular adhesion molecule-1 and dramatically inhibited the proliferation of ASMCs. These effects were shown to be associated with decreased reactive oxidant species (ROS) levels. The phosphorylation of Akt and Mitogen-Activated Protein Kinase (MAPK) caused by increased ROS was significantly decreased by CAPE, which implied a contribution of ROS-MAPK/Akt signaling to the attenuation of asthma.”

Their conclusion: ” CAPE alleviates airway inflammation and remodeling in chronic asthma by balancing the airway microenvironment”.

• Another study from 2015, conducted by El-Aidy WK et al. from Mansoura University, Egypt, showed the effects of honey, royal jelly and propolis on mouse conalbumin-induced asthma.

From all three bee products only propolis exhibited considerable ameliorative effects against asthma, after the treatment with 30 mg/kg bw  (aqueous and ethanolic extract). Researchers said this effect could be explained by the flavonoids and phenolics found in propolis, which might have antioxidative effects.

The groups treated with propolis extract exhibited considerable ameliorative effects against asthma, which might be explained by the flavonoids and phenolics found in propolis, which might have antioxidative effects.

The conclusion: “These results suggest that propolis extracts may be a potential novel therapeutic agent for asthma.”

on Amazon.com good for children

Propolis is also known to contain Kaempferol, which is a flavonoid found in many edible plants such as: tea, broccoli, cabbage, kale, beans, endive, leek, tomato, strawberries, and grapes and in plants or botanical products commonly used in traditional medicine such as Ginkgo biloba, Tilia spp, Equisetum spp, Moringa oleifera, Sophora japonica and propolis.
This compound has anti-oxidant and anti-inflammatory effects that have been demonstrated in various disease such as: encephalomyelitis, diabetes, asthma, and carcinogenesis. (study)

I personally don’t understand why while there are available studies on its effect on asthma, our conventional medicine does not involve more in researching it. All the studies were conducted in the Eastern part of the world, probably because the traditional medicine is more intensely using propolis.
But we should not probably expect more from a country that does not even agree with the medicinal effects of bee products.

In the US, there are yet some complementary therapies (not alternative) which are accepted.

Other complementary therapies to manage asthma

Accoriding to dr Sircus taking sodium bicarbonate with lemon (which turns it into CO2) is a fantastic and prime treatment for asthma as it relaxes the blood vessels, decreases inflammation and calms the nerves through pH regulation.

Heal your soul first! Manage your grief and sadness!

I said it once and I will say it again. You cannot have a healthy body without a healthy mind. There is no tradition in the world, no religion to tell you different things. Even the great Romans said: “Mens sana in corpore sano”.

Lungs are connected to our sadness and grief. Here are some steps to follow:
1. Observe yourself and be aware of your moments of sadness.
2. Try to find out what causes them.
3. Accept that what happened to you, happened and cannot be reversed. If it cannot be reversed, grief is absolutely useless.
4. Stop judging the others and yourself. Especially yourself. Things happen and they are not in our control. Let go.

I have personally found that once you go down the sadness path, you don’t even want to come back from it. I realized we enjoy our sufferings. It takes lots of will power and energy to extract yourself from the hollow you know you are falling. Is not an easy job. But it can be done. And if someone else can, you can, too.

5. Express your sadness and then let it go. Spy your own thoughts and try different things. We have so many tools these days, that can help us: music, meditation, exercise, dance, a new hobby, a pet, comedies, live concerts… Be careful and run away from the most comfortable ones: smoke, alcohol, food, TV, laziness, self-pity.

Grief and sadness in children?
Asthma and lung diseases happen to very young children, too. And they are not depressed and are not sad. According to Russian therapist N. Lazarev, children take all their mothers’ karma. If a mother is sad for too long, it will be seen on her child’s health.
As usual, mothers hold all the responsibilities! (Where is the fairness here?)

I recommend you to read what the Chinese physician Emma Suttie says about her experience with sad patients, from the Traditional Chinese Medicine approach.

“I have been dealing with a lot of grief lately. This is usually the way it goes. A patient comes in who is suffering with loss. Perhaps it is the breakup of a relationship, the loss of a pet or the death of a loved one. There is nothing more devastating to us than loss. It hurts the heart, and leaves us with an emptiness that is difficult to fill. It is something that everyone on the planet will have to deal with many times in their lives, so I thought that I would talk about some of the ways that it can be made a little easier, less painful, and with minimal suffering in the context of Traditional Chinese Medicine (TCM).”

Propolis is a natural supplement for asthma management. was last modified: June 22nd, 2019 by Laura
Laura 03/10/2017
Gallberry honey – one of the best honeys in Georgia and Florida The Honey Bee Algorithm – another help from the honey bees