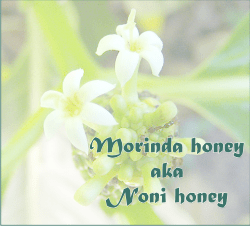 Noni. In my opinion the ugliest fruit on Earth. Not to mention its horrible smell! What is noni juice good for?

Noni, aka morinda citrifolia, is widely known as one of the most healthiest superfood Nature has given us.  Its popularity is constantly increasing being more and more used as a dietary supplement, a food functional ingredient, or as a natural health enhancer. As expected, honey obtained from its nectar is an important product which brings a sweet flavored taste besides many health benefits.

Other names: there are over 100 names for this fruit. The most common English names include: noni, great morinda, Indian mulberry, beach mulberry, cheese fruit and even vomit fruit.

Native from: Southeast Asia and Australasia (which includes Australia, New Zealand, the island of New Guinea, and neighboring islands in the Pacific Ocean). The species is now cultivated throughout the tropics and widely naturalized.
It grows in shady forests, open rocky or sandy shores. It is very tolerant of saline soil and drought conditions, which is why it can be found almost everywhere, even volcanic terrains, lava-strewn coasts, clearings or limestone outcrops, as well as in coralline atolls.

Type: A tree in the coffee family, Rubiaceae, that grows up to 9 m (30 ft) tall, and has large, simple, dark green, shiny and deeply veined leaves.

Flowers and fruit: The tree matures in 18 months and gives  4 to 8 kg of fruit every month all year round!
flowers are produced regularly along the stem and it is possible to see together examples of flowering, fruit development, and fruit ripening.
The fruit is a multiple fruit – formed from a cluster of flowers (inflorescence). Each flower produces a fruit, which matures into a single mass. From the same category: pineapple, fig, mulberry, osage-orange, and breadfruit.

The flowers are pretty and white and are to be found until they are germinated by bees to become moringa seeds.

The fruit is big, has an oval shape and reaches 10 to 18 centimeters (3.9–7.1 in) and can weigh up to 1 kg.
At first green, the fruit turns yellow then almost white as it ripens. Unlike other multiple fruits, when it ripens morinda fruit has a pungent odor, which explains its other names: cheese fruit or vomit fruit.
It contains many seeds.

Probably due to its smell, the fruit attracts many insects such as: weaver ants (which will protect the plant from some plant-parasitic insects), fruit bats (which aid in dispersing the seeds) and Drosophila sechellia (which feeds exclusively on these fruits).

Where can we buy noni honey from?

• Monofloral noni honey can be found on healingnoni.com. They say it’s an “exclusive, exotic, one-of-a-kind Hawaiian Noni Nectar Honey produced by honey bees from the Hawaiian Noni flower.” Don’t believe them by word! Try it for yourself.

They recommend this type of honey for the digestive system. “Take 1 teaspoon of Hawaiian Noni Nectar Honey with a tablespoon of lemon juice on an empty stomach in the morning.”

Read more about morinda aka noni.

Amazon.com sells an 80 pages book written in 2007 by Rainer W. Bussmann, covering all about traditional use and scientific research that has been made on noni. Unfortunatelly it can be found only on paperback Noni (Morinda citrifolia L.) – A Gift From Paradise

Why is morinda aka noni so much praised?

The interest of modern world towards this plant was triggered by its traditional uses. Old medical practitioners in Hawaii and Polynesia have used Morinda citrifolia L. (Noni) for centuries to cure or prevent varieties of illnesses. And our medical research found they were right.

According to a review from 2015 by Reem Abou Assi et al. “Morinda citrifolia (Noni): A comprehensive review on its industrial uses, pharmacological activities, and clinical trials.”, morinda has lots and lots of heath benefits, containing phytochemicals that own antibacterial, antiviral, antifungal, antitumor, anthelminthic, analgesic, hypotensive, anti-inflammatory and immune enhancing effects. They showed that noni has:

Candida albican was the most sensitive to M. citrifolia antimicrobial activity,  in a methanol partitioned with n-butanol extract of morinda.
– Another in vitro study by Jayaraman et al., 2008 was conducted on methanol, ethyl acetate and hexane. Methanol extract was the most effective, ethyl acetate was effective against all the tested micro-organisms except for Pseudomonas aeruginosa and Klebsiella pneumonia, and hexane extract was ineffective against all tested microorganisms.
– A study conducted by Atkinson, in 1956, showed that Australian M. citrifolia leaf has antimicrobial activities against Salmonella, Enterica serovar typhi (S76), Staphylococcus aureus (B313) and Myco. phlei CSL.
– an in vitro study reported M. citrifolia as an oral antiseptic through teeth inoculation with Enterococcus faecalis at 37 °C in a CO2atmosphere for 30 days and treat them with Tahitian noni fruit juice and other chemicals.

–  In other study, the anti-oxidant activity of morinda was evaluated as a natural anti-pigmentation agent by observing the effect of 50% ethanol extracts of Tahitian morinda fruit flesh, leaves, and seeds, on the tyrosinase enzyme responsible for controlling the production of melanin. The study showed that the seed extract had stronger tyrosinase inhibitory (from 20 to 500 μg/ml) and antioxidant activity than the fruit (500 μg/ml).

– A clinical study was carried out on twenty-two participants, for a 12 weeks trial of a weight-loss program with a fixed study factors including Tahitian Morinda citrifolia – based dietary supplements (US brand), daily calorie reduction, and exercise. The results showed that all participants experienced weight loss with significant decrease in fat mass without side effects. (Palu et al., 2011)

– The Costa Rican Morinda citrifolia fruit juice provedto have the anti-inflammatory activity in an in vitro study. (Dussossoy et al., 2011)

– Tahitian merinda fruit juice showed a reduction in the induced carrageenan paw edema in rats, revealing a strong anti-inflammatory effect comparable to that of non-steroidal inflammatory drugs, such as acetylsalicylic acid, indomethacin and celecoxib, without side effects (Su et al., 2001).

Thai dried mature unripe M. citrifolia fruit aqueous extract was reported for its in vivo gastro-esophageal anti-inflammatory effects in rats at a range of 0.63–2.50 g/kg, with possible mechanisms of reducing the formation of acute gastric lesions, blocking the esophagus reflux and acting as an antisecretory agent similar to ranitidine and lansoprazole (Mahattanadul et al., 2011).

100 patients with a high risk of postoperative nausea and vomiting (PONV) participated in a study and some received Thai M. citrifolia fruit one hour before the surgery at a dose of 600 mg. The results revealed that patients who received morinda citrifolia experienced significantly less nausea during the first 6 hours compared to the placebo group (Prapaitrakool and Itharat, 2010).

M. citrifolia was reported to act as an anti-psoriasis healing factor in a 31-year old man who received treatment of moni fruit powder (4 g/day) and a weekly methotrexate. After one month treatment, his psoriatic skin lesions significantly improved. (Okamoto, 2012).

Both Tahitian and commercial M. citrifolia fruit juices was reported in an in vivo study on mice, suggesting that it is modulating the immune system. (Palu et al., 2008).

Damnacanthal, a component of morinda fruit, showed an in vitro anti-viral activity by inhibiting one of the human immunodeficiency viruses type 1 (HIV-1) accessory proteins in a Hela cells through an unknown mechanism.  (Kamata et al., 2006).

In a study 8 participants consumed 2 oz of either a placebo or a noni juice (US brand), along with calcium supplement, two times a day for 3 months. The results showed an increase in bone reconstruction which is probably due to a slight increase in the mean value of the osteoclastic activity specific marker, the deoxypyridinoline crosslinks. (Langford et al., 2004).

“M. citrifolia has been used as a medicine for the overall maintenance of a good health as well as the prevention of some diseases including skin, brain, GIT, heart, liver and cancer. Till date, the only information available for daily recommended oral dose of M. citrifolia is 2 g.”

This is an enormous mistake I have often met in the online blogosphera. Though referring to noni, many articles quote dr. Monica G.Marcu and her book “Miracle Tree” where she talks about the health benefits of a completely different tree (yet with this resembles in name) Moringa oleifera.

3 thoughts on “Noni honey aka morinda honey. And what is noni juice good for?”