How to treat a SINUS INFECTION. Here are 6 natural alternatives. 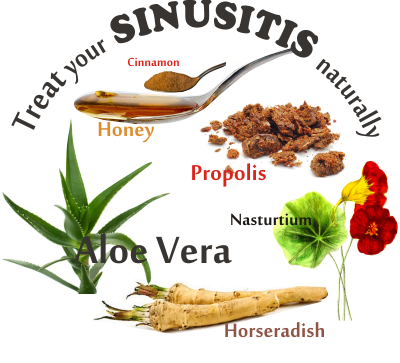 If you need to know how to treat a sinus infection it means you have already gone through nasal congestion, coughing, sneezing, wheezing, itching, headache, fatigue, pressure in the ears, loss of taste, watery eyes. And those who did not treat them, also know the other complications that follow: from tissue breakdown to bronchitis, hives, asthma attack, disorder of the center of gravity, deafness, meningitis, and so on.

The available medication is meant to eliminate the allergic response (and the associated symptoms) and to build and maintain a functional immune system. There are lots of natural alternatives to our conventional drugs and we all prefer them due to their lack of side effects. Please make sure you are not allergic to any of them first.

Propolis and bee pollen have a powerful antimicrobial and anti-inflammatory effect. Propolis stimulates phagocytosis, by which white blood cells destroy bacteria and other microorganisms which can cause allergic reaction. Studies have proved that there are some changes within 30 days of taking propolis and bee pollen alone, while the majority of noticeable symptomatic changes may take 90 days or more.

The online literature offers us lots of studies that show propolis is good for asthma, for oral health in general, for respiratory conditions, for microbial infections, for skin, for liver and radiation, even for leukemia and cancer.

Propolis tincture is known to be very efficient in treating sinusitis. Folk medicine recommends pouring 4-5 drops in each nostril, morning and evening. Use a water soluble propolis exrtact.
For chronic cases traditional medicine also recommends drops of fresh cabbage juice. Pour 6 drops into each nostril every evening before going to bed.
Use several drops of propolis for aerosol inhalations as well.

For those of you who are afraid of pouring propolis extract (aqueous) in your nostrils, APIMAB Laboratoires from France make a very good nasal solution known to unblock the nose, suitable for children, too. I could find it on Amazon.co.uk: Propolia® Nasal Spray – Propolis, Thyme, Equisetum and Potassium

.
1 -2 squirts in each nostril 4 times a day with this decongestant and your rhinitis will be gone.

A gentle alternative is an isotonic solution from sea water and propolis, as it is Athomer Sterile Isotonic Sea Water Spray with Propolis (35ml)’ (1oz), from All Natural, available on Amazon.com.

I knew about the benefits of Cinnamon Honey, and I also knew about its powerful effect on sinusitis, but I couldn’t stop laughing the other days after reading a story in which cinnamon and honey was not recommended.

It seems that a very respectable lady from Peru, L. Maxine McQueen, mother of five boys, who was suffering from sinusitis, took the advice of one of her sons and tried to cure his sinusitis. She was told to take honey with cinnamon three times a day.  “Put one teaspoon of cinnamon in a tablespoon; then fill up the tablespoon with honey and swallow” he explained.

And this is what happened – as described by Maxine herself: “It took me to my knees. I couldn’t breathe. My eyes were watering. I was gasping for breath. My entire mouth and esophagus were on fire. I pounded the kitchen floor with my hands. I literally crawled over to the refrigerator and snatched the milk jug. I lay down on the floor and rolled around in agony.” – and this continued for a while…

After the complete indifference of both son and husband, the lady realizes something: “… it takes me until bedtime to realize I haven’t sniffled, coughed, sneezed nor had a headache since the colossal cinnamon caper. It worked! By Jove, it worked.”

Saying again and again “take this and you will heal” doesn’t always work. Most of the time real experiences of real people are the only ones that inspire and give us enough confidence to at least try it.
Here is her conclusion:

“Cinnamon and honey is not for the faint of heart. It puts an unquenchable fire in your mouth. Truly the cure can be worse than what ails you.”

Here is the entire story for those of you who want other details.

If you decide to try it, please make sure that you mix the 2 ingredients very well. It’s important, otherwise the cinnamon will burn your mouth. And most importantly, you should eat Ceylon Cinnamon – the regular one can damage your liver if you take high quantities. Details in Cinnamon warning.

It’s a trend now, manuka honey is good for everything. Exotic, expensive, tasty and therapeutic. The best combination to attract people.
And as always things can be exaggerated. If your sinusitis has a microbial cause, then manuka honey can help. A perfect concentration is required for best results (for the safety of mucosa) and this is not easy to make at home. It is better to buy a nasal spray like this one: Manuka Honey IAA10+ Sinus And Nasal Spray, available on Amazon.co.uk.

You can also try aerosols with it and eating it. 1 g of manuka honey per kg body weight for maximum 3 months. A tablespoon has 21 grams.
UMF15+ is just fine, see here a list of certified and trustful brands.

Remember that if you sinusitis has an allergy cause, than manuka honey cannot help you. It is best to use your local honey.

More on the effects of manuka honey on sinusitis and other therapeutic alternatives. Traditionally, horseradish is the best known natural remedy for sinusitis and in general for all upper respiratory disorders, from running nose and sinusitis to sore throats and bronchitis.

There are different methods of preparing remedies out of it, from grinding it and mixing with apple cider vinegar (and then taking 15-20 inhales every hour), to simply letting it stay for 24 hours soaked in honey and eating that syrup. A very similar plant is nasturtium. Although the plant is less used in Europe, it is very common in South America, where it originates.

Nasturtium (aka Indian cress) is used in breaking up congestion in the respiratory passages and to relieve congestion of colds. The juice or tea can be used as an external disinfectant but it can also be taken internally, aiding digestion. Nasturtium is said to promote the formation of blood cells and it is given as a blood purifier.

A study from 2007, conducted by Goos KH from Germany, showed the efficiency of a herbal drug containing nasturtium herb and horseradish root. The study involved 858 children, adolescents and juveniles in the age between 4 and 18 years, who had acute sinusitis, acute bronchitis or acute urinary tract infection. Half of them were treated the herbal drug (Angocin Anti-Infekt N) and half with a standard antibiotic.

The results showed that for all three conditions, the therapy with the herbal drug preparation was comparable to the treatment with standard antibiotics. Which means the same good result, only without the side effects of synthetic drugs.

So why aren’t we told about this other option when we get one of these three conditions? It is known and available to people worldwide since 2007! The Amazon from Germany sells it. Called by many “an amazing miracle plant”. It is widely used in creams, tooth gels and shampoos but it can also be taken internally.
The miraculous aloe leaf contains 200 compounds, including 20 minerals, 18 amino acids and 12 vitamins.

Aloe is known to reduce inflammation of the lining of the bone cavities that communicate with the nose; which will speed up the healing of sinusitis.

And the good news is that besides the products available on market, we can also prepare our own remedy, if we have the plant at home.

• Cut a piece of an aloe vera leaf, extract the juice found inside (press it between fingers) and pour into a small dark glass bottle, for a later use.
Apply 4 drops of liquid aloe to the nose (2 in each nostril) just before bedtime. You’ll feel the airways become unlocked; the feeling of blockage is reduced and you can enjoy a restful sleep.

• A second way of using it is to make some vapor inhalations. In a pot of water put a few pieces of aloe leaves (and some eucalyptus leaves – if you have any). Bring the water to boiling point and then remove from heat. Place the pot on a flat surface, cover your head with a towel, approach your face to the pot and inhale the vapor.

•  Lightly rub a piece of aloe leaf directly on the forehead and let it sit there for a few minutes. Or use a gauze or a thin cloth and moisten it withe the aloe gel. It will help with congestion, pressure feeling and headache.

Most herbal therapists recommend for sinusitis:
– a nasal spray with saline water and aloe vera, like this one from here: NATURADE SALINE & ALOE NASAL SPRAY, 1.5 FZ

– and Aloe Vera Gel, to be taken internally, to support a healthy immune and digestive system. Here is an example: Lily of The Desert Aloe Vera Gel Inner Fillet, 16 Ounce

In a study from 2011, Gao M and his team from The Johns Hopkins University Bloomberg School of Public Health, Baltimore, USA, researched the effects induced by an aerosolized mixture of five naturally-occurring antioxidant oils: aloe vera, coconut, orange, peppermint and vitamin E.

The study’s conclusion was that those oils can effectively reduce inflammation associated with oxidant stress-related challenge to the nasal mucosa.

MSM enhanced with C for optimal absorption.
available on Amazon.com

MSM is a naturally occurring organic sulfur compound present in most all plants and animals including milk. However because of its volatility, it is readily lost when fresh food is stored or processed. Unless the diet consist largely of raw, unprocessed foods, it is unlikely that sufficient MSM will be ingested enough to contribute to the daily nutritional sulfur requirement. Therefore, most people suffer with sub-clinical symptoms related to sulfur deficiency.

Low levels have been demonstrated to cause organ malfunction, fatigue and increased susceptibility to disease. Meaning, a suppressed immune system. Blood studies have also demonstrated a direct correlation between MSM concentration and resistance to allergens. All forms of allergic responses did demonstrate significant improvement when MSM was supplemented.
MSM Dosage: First 30 days take 2,000 mg. three times daily. Then drop back to 1,000 mg. three times a day (recommended by althealth.co.uk)

It has been proved that a poor immune system is dehydrated. Chronic dehydration causes loss of cellular function and corresponding tissues become more prone to disease and dysfunction.
There is no supplement in the world that can function without a proper hydration. Drink water. Mineral water or spring water. Not sparkling water or other sweet juices. Not very cold water. In fact warm water is the best, as it enters the cells more easily.
30 minutes to an hour prior to meals.
And yes, before drinking it, look at it with gratefulness in the eyes, because it will help your body. Feel this. 🙂

How to treat a SINUS INFECTION. Here are 6 natural alternatives. was last modified: June 22nd, 2019 by Laura
Laura 03/31/2017
What is the Best Honey in the World? Apimondia can give an answer. Take your medicine with honey. It will enhance its power!

Leave a Reply to Cindy