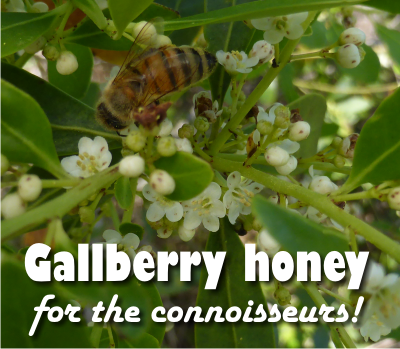 Georgia and Florida take a well deserved pride in their gallberry honey. As its name says, it’s a monofloral honey made from the nectar of gallberry – a bush that grows only in those areas.

Gallberry is a name given to two related plants: Ilex coriacea and Ilex glabra, both native to coastal areas in the United States from Virginia to Texas, both shrubs in the Holly family (Aquifoliaceae). Both providing good quality nectar for honey bees to collect.

Ilex coriacea gives a mild flavored, light colored honey, mostly in Florida, South Carolina, and Georgia. Ilex glabra is more frequent and therefore the correspondent honey is more common, and its honey more highly-rated. Yet the flat-woods of eastern and southern coastal regions of North America are relatively small and this is why this honey variety is not commonly available everywhere. Botanical name: Ilex glabra,
Other names: Inkberry, gallberry, Appalachian tea, dye-leaves, evergreen winterberry.
Family: Aquifoliaceae
Location: it is native to the coastal plain of eastern North America, from Nova Scotia to Florida to Louisiana where it is most commonly found in sandy woods and peripheries of swamps and bogs.
Characteristics:
– a medium-sized evergreen foliage shrub that can reach 8′ tall x 8′ wide
– found in areas with full sun to full shade, preffering moist to wet, acidic soils, but is somewhat adaptable to soils of various pHs and to dry soils. Its only requirement is not be placed in south- or west-facing exposures to avoid winter foliage burn. [Allthough gallberry performs better than most broadleaf evergreens under adverse conditions, it will start to foliage burn at about -26 degrees C (-15 degrees F)].

Beekeepers say the best plants have their feet in water and their heads in the sun.

Foliage: evergreen shiny dark green (lighter green in alkaline soils, especially in winter). The leaves are spineless, flat, ovate to elliptic, glossy. Native Americans used dried and roasted inkberry leaves to brew a black tea-like drink, hence the name of Appalachian tea for this shrub.
Flowers: male and female flowers, small, greenish white, occurring in June on separate plants (dioecious). The flowers bloom at the beginning of May and last for 24-28 days. It’s a short period of time, but when this happens, the flowers literally drip with nectar.
Fruit: When pollinated, female flowers give way to pea-sized, jet black, berry-like drupes (inkberries to 3/8″ diameter) which mature in early fall and persist throughout winter to early spring, if they are not meanwhile eaten by local birds. The berry is very bitter, though honey is really sweet and of very high quality.
Used for: foundations, borders, group plantings, mass plantings, formal or informal hedges, backgrounds, specimens, or naturalized areas. And, of course, to give the precious nectar which will be transformed by bees in honey. How is gallberry honey?

Color: light amber
Consistence: heavy
Flovor: mild but distinctive, with a mild sorghum or molasses flavor.
Crystallization: very slow – due to its higher than typical level of levulose (a fructose sugar)
Enzymes: high amount of diastase (its particularity)
Total phenolic content: high, >1000 μg GAE/g (like manuka honey and some multifloral honeys from Florida) – according to a study which evaluated some sample of honeys from Florida for their antioxidant capacity, total phenolic content, and free radical scavenging capacity and compared them with three New Zealand Manuka honeys.
Phytochemicals: Plant hormones 2-cis,4-trans-abscisic acid and 2-trans,4-trans-abscisic acid were the most abundant (according to the same study)
Acids:  Coumaric acid, rutin, chrysin, pinocembrin, quercetin, luteolin, and kaempferol – found in low concentrations.

Gallberry honey is rarely pure. Meaning it is usually made with nectar from other flowers. Gallberry plants are wild and grow among many other pine forest plants. Some of them may be in bloom at the same time as gallberry, like palmetto. This makes it difficult in maintaining a pure honey, though the taste of gallberry will be felt even in honeys with small percentage galberry honey.
And the funniest thing is that when sellers do find this monofloral honey they blend it with other better known honeys, to get a better price.

But these days the local tradition of producing Gallberry Honey is threatened. The development destroys the forests and pretty much the whole nature. Those untamed forests where the plant loves to plant its feet… they’re becoming few and far between.

Beekeeper Doug McGinnis, member of the National Honey Board, says that due “to destruction of wetlands, it’s harder to find areas that produce lots of gallberry honey.  When I was young, the ‘galberry woods’ were most abundant just north of here, from Bunnell, Florida to Palatka, Florida.  Today that area is encompassed by the Palm Coast development.  So, sustainable?  Only as long as we preserve some of the wild lands left in Florida and Southern Georgia.”

As for its medical benefits, gallberry honey hasn’t been so much studied, if at all. It’s honey so it is beneficial for all the body, for digestive and respiratory systems and for wounds. But there are no available studies on specific effects of gallberry honey on our health.