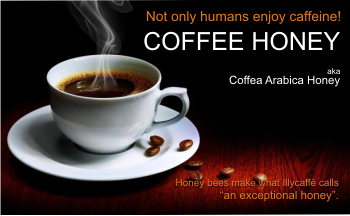 Have you ever heard of Coffee honey or Coffea Arabica honey? Can honey bees forage plants containing caffeine or nicotine or similar substances in their nectar?

Yes, bees likes coffee, too! Though coffee plants don’t need bees or other insects to pollinate them, honey bees are attracted to the coffee flowers, enjoy their nectar and help he plants double their yield of mature fruits, when compared to spontaneous self-pollination (Raw and Free, 1977). Fruit retention also seems to be enhanced by outcrossing (Roubik, 2002).
It was noticed before that coffee plants are frequently visited by bees during flowering and so beekeepers brought their hives of Apis Mellifera and start producing coffee honey.

From what coffee plants?

Coffea Arabica mostly, but also from Coffea canephora – as they make the largest crops in the world.

According to Illy, the famous coffee producer, there are several species of Coffea, but the finest quality is found in Arabica, which today represents 59% of the world’s coffee production. Arabica is the only species with 44 chromosomes of Coffea and some scientists say this feature gives it its high quality. Chemically, Arabica’s caffeine content varies from 0.9 to 1.7% of each bean’s volume.

The plant comes from Ethiopia ans it is also known as the “coffee shrub of Arabia”, “mountain coffee”, or “arabica coffee”. C. It was the first species of coffee to be cultivated.

It is sensitive to hot and humid conditions, and so it grows in tropical and equatorial regions where it is always spring or summer, there’s no change of climate, rather the beginning of the rainy season that triggers Arabica plants to flower, fragrant and white.

The plant can tolerate low temperatures, but not frost, and does best with an average temperature between 15 and 24 °C (59 and 75 °F).

Flowers opening on sunny days result in the greatest numbers of berries. This can be a curse, however, as coffee plants tend to produce too many berries; this can lead to an inferior harvest and even damage yield in the following years, as the plant favors the ripening of berries to the detriment of its own health (This plant looks like a true mother to me!)
On well-kept plantations, overflowering is prevented by pruning the tree. The flowers only last a few days, leaving behind only the thick, dark-green leaves. Coffea arabica is a self-pollinating plant.

Eight or nine months after flowering the fruit comes: deep red, shiny and plump like cherries, each containing two Arabica seeds, or beans. The coffee beans.

The plant is considered fully matured in about 7 years.

Don’t bees get high? Or addicted?

Caffeine is an alkaloid found in plants such as coffee (Coffea arabica), tea (Camellia sinensis), and cocoa (Theobroma cacao). It’s a psychoactive substance from the same class with cocaine, morphine and nicotine. The plant produces it as a a defense mechanism and at high doses it’s very toxic to insects and fungi.
Even more, high levels of caffeine produced by coffee seedlings can even inhibit the germination of other seeds in the vicinity of the growing plants (a phenomenon called allelopathy). Allelopathy allows one plant species to “defend” itself against other plants that may compete for growing space and nutrient resources. Smart plants I would say!

A study carried out at the University of Haifa has found that bees prefer nectar with a small concentration of caffeine and nicotine over nectar that does not comprise these substances at all. The results showed that bees clearly prefer nectar containing nicotine and caffeine over the “clean” nectar. The preferred nicotine concentration was 1 milligram per liter, similar to that found in nature. Given a choice of higher levels of nicotine versus “clean” nectar, the bees preferred the latter.

As for addiction, according to the researchers, it is difficult to determine for sure whether the addictive substances in the nectar became present in an evolutionary process in order to make pollination more efficient. It can be assumed, however, based on the results of the study, that the plants that survived natural selection are those that developed “correct” levels of these addictive substances, enabling them to attract and not repel bees, thereby giving them a significant advantage over other plants. The researchers emphasized that this study has proved a preference, not addiction, and they are currently examining whether the bees do indeed become addicted to nicotine and caffeine.

Another study, conducted by Geraldine Wright, a neuroscientist at Newcastle University in England, showed that bees may actually benefit by low concentrations of caffeine in coffee flowers. He said that ‘Remembering floral traits is difficult for bees as they fly from flower to flower so fast. (..) We have found that caffeine helps the bee remember where the flowers are.”

So, no, they don’t get high, but the brain cells involving the memory are affected. It improves their long-term memory and encourages them to come back to the coffee flowers.

But this “coming back” to the flower is not necessary good for the whole yield of honey.

Compared to a control, a sucrose solution with field-realistic doses of caffeine caused honey bees to significantly increase their foraging frequency, waggle dancing probability and frequency, and persistence to the forage location, resulting in a quadrupling of colony-level recruitment. An agent-based model also demonstrates how caffeine-enhanced foraging may reduce honey storage. Overall, caffeine causes bees to overestimate forage quality, tempting the colony into sub-optimal foraging strategies, which makes the relationship between pollinator and plant less mutualistic and more exploitative. Plants have more to gain from here. (To see more details and watch the video associated, please see phys.org)

Some specialists considered that the presence of nicotine in the plant’s nectar, somehow hides a lower quality of the nectar, thus still alluring pollinators.

Margaret Couvillon of the University of Sussex, says: “We describe a novel way in which some plants, through the action of a secondary compound like caffeine that is present in nectar, may be tricking the honey bee by securing loyal and faithful foraging and recruitment behaviors, perhaps without providing the best quality forage”.
Roger Schürch, of the University of Sussex and the University of Bern, also said: “The effect of caffeine is akin to drugging, where the honey bees are tricked into valuing the forage as a higher quality than it really is”.

A recent study, conducted by Kadri SM, São Paulo, Brazil, and published on 15th of July 2016, showed that coffea arabica honey has some specific characteristics when compared to other honeys, and it is not less qualitative. Its physicochemical parameters (total acidity, pH, moisture, dry matter, ash, and qualitative hydroxymethylfurfural) were within the approved limits established by EU legislation. Here are its specific characteristics:

The samples of coffee honey in this study were produced in Espírito Santo State, Brazil, from crops of Coffea arabica with collonies of Africanized Apis mellifera. The researchers analyzed their melissopalynology, physicochemical and nutritional properties, mineral and caffeine contents. The caffeine content in the nectar from coffee flowers was measured by high performance liquid chromatography (HPLC).

· Antioxidant activity: very high. When measured by FRAP: 1781.77 mg FeSO4•7H2O/kg of honey and when measured by DPPH assay: 86.20 mg gallic/kg of honey (on Thai coffee honey sample)
This means we should take this honey if we are having a cold, a flue or simply want to boost our immune system. But this honey is not recommended to people with cancer. See Natural antioxidants in honey. Do we really need antioxidant supplements?.

· Antimicrobial activity: high, due to its hydrogen peroxide activity and its high phenolic and flavonoid content. To benefits from this antimicrobial feature, consume it only raw and fresh (in the first 3 months after harvest).

Can we have a spoon of coffee honey instead of one cup of coffee?

No. Although the coffee honey can have up to 8-fold more caffeine than it was found in the nectar of caffea arabica flowers! Probably due to the whole process of water evaporation that takes places during the production of honey. Yet, we will need over 7 kg of honey to equal the quantity of caffeine found in a regular cup of coffee.

With so many coffee crops, why isn’t there more coffee honey on the market?

Probably because coffee plants are self-pollinated. Or, as specialists say “a self-fertile, tetraploid species”. But studies say that honey bees, Africanized, Apis Mellifera, or even stingless bees do coffee plants a lot of benefit.

Illycaffè, a well-known producer of a unique blend of espresso coffee, presented the results of an important study about monofloral coffee honey, in Cesena, Italy, in 2014. According to them, at the moment beekeeping activity for producing coffee honey is practically nonexistent but if developed, it could help the people to create an additional source of income as well as an environmentally-friendly economic model which could be applied in all coffee-growing areas.

Their study confirms that bees actually help to increase the production of quality coffee, and also offer the opportunity to produce a truly exceptional honey and other related products.

Ernesto Illy Foundation and important Colombian coffee producers promote beekeeping as an additional means of support to coffee growing and production in poorer communities so that they can improve plantation management and also benefit from a secondary and sustainable economy.

What can be done to have more coffee honey?

Having more coffee honey has a large economic importance, and coffee farmers should therefore consider enhancement of bee populations as part of their coffee field management.
According to a study published by American Journal of Botany in 2003, this can be done in 3 ways:
– reducing the use of pesticides,
– bringing hives of honey bees and providing nesting sites for solitary bees ( by establishing earth banks for groundnesting bees and by preserving old shadow trees for bees using wood as nesting sites,
– improving pollen and nectar availability for bees.

Where can we find coffee honey?

We can’t actually. If you are from those parts that cultivate coffee you have more chances. Guatemala coffee plantations market coffee flavored honey. Colombia, Tolima region but not only, can offer some.
Online shops don’t have it, I found some on Amazon.com, coming from Thailand (?!), but I’m not sure of its authenticity. Here it is, if you want to take a look: Raw Honey (Coffee Blossom honey)