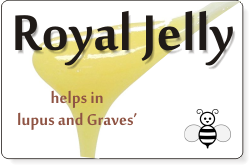 Royal jelly is one bee product which can be an efficient natural treatment for lupus and Graves’ disease. At least this is what the recent studies say.

For some people a natural treatment is the first choice, for others it is only the second – forced to approach it due to poor results. But we all must admit that natural approach is real and nowadays it is more and more researched.

From all bee products, honey is recommended as a regular food for all those suffering from immune conditions. There have been lots of studies supporting this. As for an intense remedy, royal jelly proved to be very efficient.

Efficient in what? Curing from the disease or easing the symptoms?
This is hard to tell. People usually are satisfied with the way they live their life and when they feel powerful and healthy they don’t go for other tests. Besides, the tests needed to diagnose a disease are many and costly.
Yet, even if what it does is to vanish the symptoms, royal jelly is still better than synthetic pills asit doesn’t have side effects. So, yes, it’s worth taking a look on this article. 🙂

What is royal jelly?

Royal Jelly is what the queen of the hive eats. And all the other larvae in their 3 days of life. It’s an ambrosia for them, made from honey, bee pollen and enzymes from the bees’ glands.

An intriguing substance, especially when compared to the sweet honey: it’s ultra sour, with a bitter taste and a strong odor. Yet, scientists said it has a rare biological power.

What is it good for?

The list is long. Scientists say it has antitumor, antibacterial, antihypercholesterolemic, antiallergic, antiinflammatory, and immunomodulatory properties. Basically for everything: boosts immunity, fights infections, enhances brain function, balances hormones, fights allergies. Forums are full of people swearing they were healed from hepatitis or cancer.
Chinese Traditional Medicine used it since of beginning of beekeeping and China is still the largest producer.

As for its influence on people suffering from autoimmune conditions, there are recent studies showing that royal jelly (RJ) has immunomodulatory effects and this gives us hope as to its use in our life.

What are autoimmune diseases?

An unfortunate situation when one’s body attacks and damages its own tissues. Why? Well, if we only knew the answer to this, the medical world could come with a solution and create a remedy instead of only giving drugs to lower the symptoms.

Why do they appear?

Psychologists, new-age thinkers and other alternative therapists relate these conditions to our own mind, in fact to our extreme auto-criticism, low self-esteem and the incapacity of forgiving ourselves. The body is said to behave like a mirror, reflecting at the physical level what it is shown by the spirit/mind.
It makes sense, of course, but sometimes the mind is more difficult to change and heal that the body. It’s true that it is an image that won’t last. Because even if we modify the image from the mirror, once we let it be it will reflect the mind again.

But it is also true that even if we get aware of our problems and change our mind, the body is slower in healing and changing, which is why we can interfere with some natural help.

How to cure our mind?

Thorough analyses with the help of a psychologist, meditation or through guided regressive hypnoses. It’s the one I recommend, because only reliving certain experiences can make us aware of us, with thoughts, emotions and actions. Only directly experiencing certain situations can make us conscious of our flaws and lead us to the acceptance of our own being. If  we will get to understand why we are against our own person, our body will stop fighting against itself.

(Two years ago I read the most important book of my life, :), a very thick book (693 pages), read it in like half the year. It has so much info to process, that I needed lots of breaks. But I always came back to it. A book that goes through the lives of many patients, making them understand themselves, heal them and change them. I will always recommend it. There are 5 books in the series, but I liked 3rd the most. Here: The Convoluted Universe, Book 3

Which are the autoimmune diseases?

From all these, there have been studies made only for some of them: systemic lupus erythematosus (ELS) aka lupus and Graves’ disease.

Lupus is a lifelong disorder of the immune system. Our own immune cells attack the body’s own healthy tissues, leading to inflammation and tissue damage. Symptoms may vary from skin lesions to joint pain and even severe cases where there are serious damage to the heart, kidneys, and other vital organs. There is no cure, only some synthetic drugs that can minimize the damage.
Yet there are some other natural alternatives, and scientists have confirmed that, among them, royal jelly is a very efficient one.

• In November 2016, pubmed published the study: Effects of royal jelly supplementation on regulatory T cells in children with SLE, by Zahran AM et al., from Egypt. They did this study because there were no previous studies focused on the immunomodulatory effects of fresh royal jelly (RJ) administration on systemic lupus erythematosus (SLE) in humans. Only folk claims that it works.

So, they studied the effect of fresh RJ administration on the disease course in children with SLE with some immunological markers (CD4+ and CD8+ regulatory T cells and T lymphocytes apoptosis). The children received 2 g of freshly prepared RJ daily, for 12 weeks.

The data suggest that the use of RJ may be beneficial in the prevention of the early onset of SLE and in the control of the active progression of the manifestations of SLE.

• As Lipopolysaccharide (LPS) from bacteria can accelerate and exacerbate lupus nephritis (LN) and induce infiltrating inflammatory cells in kidney in animal models, another study from June 2012 by Sugiyama T et al. from Japan, Inhibitory effect of 10-hydroxy-trans-2-decenoic acid on LPS-induced IL-6 production via reducing IκB-ζ expression, showed that a major fatty acid component of royal jelly, 10H2DA (10-hydroxy-trans-2-decenoic acid), had anti-inflammatory effects and could be a therapeutic drug candidate for inflammatory and autoimmune diseases associated with IκB-ζ and IL-6 production.

The effects of royal jelly in Graves’ disease.

Graves’ disease is an autoimmune disease where our immune system attacks the thyroid and makes it produce too many hormones. Recently scientists said that TSHR Ab played the most important role for the pathogenesis of Graves’ disease.
The study The effects of royal jelly on autoimmunity in Graves’ disease, by Erem C et al. from Turkey, evaluated the effect of RJ on autoimmunity in peripheral lymphocyte culture and established the therapeutic doses.
The results of the study suggest that RJ may exert an effect similar to an antithyroid drug for decreasing TSHR Ab levels.
So, yes, RJ is good for Graves’ disease. Let’s hope that other studies will follow and show which is the effect of RJ in Hashimoto’s disease, another autoimmune disease of the thyroid.

Royal Jelly may be effective as an immunomodulatory agent in Graves’ disease.

Royal Jelly may be efficient in atopic dermatitis.

If you have asthma, allergy to bee products or a higher allergic sensibility you should refrain from consuming RJ in any form. Talk to your medical doctor or therapist about it first.
And if you have never taken RJ before, start by taking a really tiny quantity, like 0.1 g, and see how you feel.

What is the best form to take royal jelly?

Just like honey, it is best to be in its raw form and as fresh as possible. Only that it is difficult to store in this form. Please read the page: Royal Jelly to find out how should be stored and which are the best form to take it.

read more on What is royal jelly good for and how to take it.

• On 2nd January 2017, nationalpainreport.com was publishing the report Scientists Discover Details About the Vagus Nerve that May Lead to Treating Painful Autoimmune Diseases saying that scientists from the Feinstein Institute for Medical Research discovered more details about how the vagus nerve interacts with the immune system. The findings may lead to treatment for autoimmune conditions like rheumatoid arthritis, Crohn’s disease and lupus. The study was published in Bioelectronic Medicine. Their conclusion?

“Vagus nerve stimulation (VNS) is most often used to treat epilepsy when other treatments haven’t worked.  VNS is also a treatment for hard-to-treat depression that hasn’t responded to typical therapies.  Based on this new research, it appears that VNS therapy may move down a path towards treating autoimmune conditions, as well.”

The good news is that besides the complicated and expensive VNS, which is a device consisting in a pacemaker-like generator that is implanted in the chest wall and is programmed by the physician to stimulate the vagus nerve in the neck, there are other alternative methods of stimulating it.

Where can I find info on how to stimulate the vagus nerve?

You’ll probably find some ways described on the Internet, but there are also cheap ebooks on Amazon which gather all these alternative methods. Here are some:

◙ The book I’ve recently read on this is HEAL YOUR VAGUS NERVE, HEAL YOURSELF: A Guide to Enhancing Vagus Nerve Function

, by Hoyd Lucy.
It’s a small book, 23 pages, which is more like a resume on available alternative methods for stimulating the vagus nerve. An easy to read book, written for lay people. What’s good in this book is that reviewing all these methods we get an idea of what might work for us.

Here is a quick peep into the first easiest methods to stimulate the vagus nerve:
– gargling (!)
– singing, humming and chanting (remember the OM humming of the monks?!)
– using tongue depressors
– cold thermogenesis (also known to stimulate the immune system)
– neck extensions
– pranayama breathing
– optimal nutrition for the nervous system
and so many other techniques, way easier to do than having a VNS installed.

◙  The book Hiatal Hernia Syndrome: The Mother of All Illness?: A Guide to Self-Healing

by Theodore A. Baroody, shows that any chronic condition is the direct result of some aspect of digestive dysfunction and that the hiatal hernia syndrome (HHS) is the mother that birth all these conditions. We’ll get a pretty good idea of why the vagus nerve is not related to digestive system only.

◙ There are also some supplements made from a vegetarian enzyme blend which is meant to maximizes proper digestion of fats, protein, and carbohydrates. E.g.: VNS Digestive Enzymes for Optimal Vagus Nerve Support

Can royal jelly be an efficient natural treatment for lupus? was last modified: June 22nd, 2019 by Laura
Laura 01/06/2017
The most expensive honey in the world is sold for 5000 euro per kilogram. Scam or not? The best oregano honey comes from Morocco!