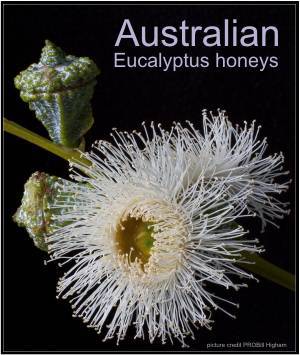 I have often seen jars of honey, originating in Australia, having a rather unusual name: “a color”+box+honey. There is gray box honey, yellow box honey, red box honey, black box honey, white box honey,…..  what is it with all these colored boxes?

If you are not from Australia, then you will be as surprised as I was. I even thought they pack one multifloral in colored boxes, to differentiate the producers…. No, I’m kidding. But starting from this I have discovered that they all belong to Eucalyptus genus, which is really really large.

Eucalyptus (aka eucalypt) is the representative tree of Australia. It can be found in almost every part of the Australian continent, adapted to all of Australia’s climatic conditions; there is no other continent which is characterized by a single genus of tree as Australia is by Eucalyptus.

There are more than 800 species of Eucalyptus, mostly native to Australia. And there is also a very small number of native species found in parts of adjacent New Guinea and Indonesia and one as far away as the Philippines.

. A sample of this application is available on line, and you’ll see if you want the whole product or not.

The Eucalyptus genus is part of the Myrtle family (Myrtaceae). The name Eucalyptus means “well-covered”; it describes the bud cap (technically called an operculum). This cap forms from modified petals and falls off as the flower opens. Flowers have no petals, instead decorating themselves with many showy stamens. The woody fruits are roughly cone-shaped and have valves at the end that open to release the seeds.

Most of the eucalyptus trees are called “gum trees” because of a sticky, gum-like substance they exude from their trunks. Some are rainbow eucalyptus because their bark can take all the colors. Doesn’t this look like taken from a fairy tale? Eucalypts are an important source of timber and their wood is used for construction, furniture making, pulpwood, and firewood. They also serve as windbreaks and ornamental trees and their flowers are a source of honey. Eucalyptus oil is extracted from the leaves and is used as an aroma and a medicinal ingredient, for instance in cough drops.

Coming back to my curiosity, those 800 species had to be differentiated somehow, so people named them after their bark, their form, their flowers and so on. “Box” refers to the form of the bark. Some other common names for different eucalypts include:

Not all the 800 species of eucalyptus make good nectar for the honey bees to collect. Here are 11 of the most important types of box eucapylts which give us good honey:

It is considered the most valuable nectar-yielding trees of Victoria. The tree is widely distributed on the eastern plains and tablelands from western Victoria, New South Wales to south-central Queensland.

The wood:
The bark of the tree is outside brownish-gray, inside yellowish and it covers the greater part and sometimes the entire stem of the tree. The timber is pale brown, dense and heavy (about 1100 kg/m3), resistant to decay and has been used for sleepers, posts, poles and bridges. It is not known as a furniture timber.

The flowers:
Yellow Box usually flowers every second year from November to February, although this can vary from year to year in different locations.

It is considered to be the best native tree for honey production, which is why Yellow Box honey is perhaps the best known of our Victorian honeys. Bees collect only nectar from this tree, not the pollen.
The honey has a delightful golden straw colour, very dense, aromatic, with a pronounced flavor. When pure, Yellow Box honey does not crystallize easily. It often contains some Red Gum honey, which crystallizes within a very short time.

The tree is also known as Peppermint or Peppermint Box. It is a medium size tree, growing between 7 and 25 meters high and with gray-green foliage. It is native to New South Wales, the Australian Capital Territory and Victoria in Australia and it is known for its drought tolerance.
In California it was introduced a long time ago and it is known as silver dollar gum, redbox or redbox gum.

Why red? Because the timber of this tree is hard and red in color.

The flowers:
The flowers are generally on new growth, but also as laterals on the previous season’s wood in clusters of 3 – 6 small flowers. Red Box usually flowers from September to November, but this can vary slightly from year to year and different locations. Some trees flower every year, in greater numbers every second year.

Nectar and pollen:
Whilst the blossoms produce excellent nectar, they do not produce much pollen. Where pollen-yielding plants are absent during the Red Box honey flow, the worker force of the colonies diminishes owing to restricted reproduction. For optimal conditions another pollen source is required.

Red box eucalytus is considered a reliable native tree for honey production Red Box honey is very pale, slightly greenish colour, very dense and aromatic. It sometimes can have a slightly oily flavor, but it would disappear after twelve months of storage. When pure, Red Box honey does not crystallize easily.

Gray Box is one of the most important and useful Eucalypts for beekeepers in Victoria. It is very regular in its flowering habits and producing more or less nectar and pollen every year.

It’s a slow growing, medium size tree, attaining a height of up to 25 meters, widely distributed over central Victoria.

Flowers:
The flowers are mostly in clusters of four to eight on the same season’s new wood. usually flowers from February to May, sometimes until June

Different from the previous boxes trees, from Gray Box bees collect nectar and pollen in large quantities. For bees, this pollen is often the only available source at the end of the honey season.

Gray Box honey is medium to dark amber in color, of medium density and reveals an excellent aromatic, sweat taste. It crystallizes after several months.

The flowers are small, white and sometimes pinkish or even crimson blossoms on the same tree – and from here its botanical name “bicolor”. The black tree blossomsin January and February and lasts for 6 weeks.

The black box honey is very good, sometimes very dense. The color is not so pale as yellow box honey.

Also known as blue Box in some places, has a whiter bark than that of the gray box, the leaves the flowers and the fruits are all larger. It blossoms one month before the Gray Box and provide pollen supplies for bees and straighten the bees for the harvest of Gray Box. It is a tree found from coastal eastern Victoria (with a few inland occurrences) from around Bairnsdale, extending northeast into New South Wales to north of Sydney.

The fuzzy box is also known as round leaf box or blue box, is a small to medium-sized tree with rough and persistent bark on the trunk and branches, fibrous, flaky, light gray, with paler, almost white patches.

White flowers appear from September to November. Honey bees do not collect any pollen from this tree.

While the flowers look a lot like those of the Red Box, the honey is quite distinct. It is clearer, slightly less dense and without the oily flavor of red box honey.

It is a small to medium evergreen Eucalyptus tree native to South Australia, Victoria and New South Wales. It is commonly known as Peppermint Box, Box Gum and Black Mallee.

It has a greyish hard box bark – which is why ot is often called Box Tree. In the past it was considered to belong to the Peppermint trees, due to its leaves’ scent, which gives the botanical name “odorata”.

The cluster of flowers occur singly at the shounder of leaves or in short sprays, with three to nine flowers. The buds are broad conical to pointed , half round, tapering into short stalklet.

Also called Apple Tree, Apple Gum and Black Butt. The tree grows on sandy, moist ground and has a wrinkled brownish bark, resembling somehow of the Stringybark Box.  It is a smooth barked variety of this species and sometimes it is confused with Manna Gum ( Eucalyptus viminalis).
The apple box tree is a shady tree with numerous branches and dense foliage. Its leaves have the scent of apples, and this gives the name of the tree.

It blossoms from February to April, more or less every year and produces both nectar and pollen. The flowers are usually more than 3 in a cluster.

The apple box honey is amber in color, not very dense, granulates more or less and makes a perfect winter food for bees. It’s a small to medium-sized tree native to south-eastern Australia, also known as Long-leaved Box, Olive-barked Box, Bastard Box, Cabbage Gum, Gray Box,  and Bundy.  It is fibrous, greyish, becoming deeply fissured, thick and shaggy in larger trees. its leaves are distilled for the production of cineole based eucalyptus oil.

It occurs widely on the tablelands of New South Wales and in Victoria west almost to the South Australian border. In South Australia from the Mount Lofty Ranges to the Flinders Ranges.

The tree flowers at irregular intervals of 4,5 or even more years, but when it does, often in 2 years in succession, and it is a prolific yielder of pollen for bees. it blossoim from March, often right through the winter.

The honey is medium dark, with a fair flavor and bees winter well on it. It candies coarsely, but not hard.

The flowering occurs in February or March. Honey bees gather a lot of pollen from it, but not so much nectar. It usually flowers in the same time with other eucalyptus which give more nectar, so it is hard to obtain monofloral honey from Gippsland Box.

This tree was formerly considered to be identical, or from the same species with the Apple Gum (E. Stuartiana). It has a whitish-gray wrinkled bark that exhales an identical aroma to the ordinary eucalyptus oil.

The But-But flowers in January and February. The timber is fairly hard, with a whitish-brown color. The honey is of fair quality.

Find out about the other types of Eucalyptus Honeys from Australia One thought on “Australian box honeys”