What is Mad honey from Turkey, aka Deli Bal, and what is it good for? 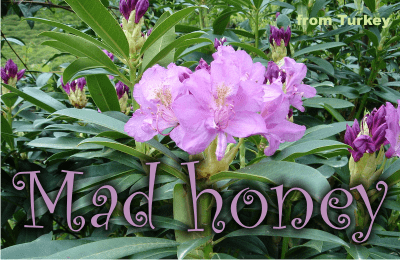 Mad honey is a controversial honey, both medicinal and toxic. A small spoon of mad honey produces a mild, calming, euphoric sensation, which increases overall feelings of contentedness and relaxation.

If you chose not to drink it, but to eat it in small quantities, this type of honey has medical qualities which have started to attract science attention. However, until its medicinal properties are well understood it is still recommended to be avoid it.

Mad honey is produced by honey bees from the nectar of Rhododendron species, particularly Rhododendron ponticum (aka “forest rose” – as locals call it), which grows in high-altitude forested areas in the Black sea region of Turkey. Rhododendron species grow naturally in other countries such as Spain, Portugal, Japan, Brazil, United States, China and Nepal, but in Turkey this honey has a historical tradition and the largest area with rhododendron. Mostly R. ponticum, though there are other 4 species present: R. ungerni, R. luteum, R. caucasicum and R. smirnovii. 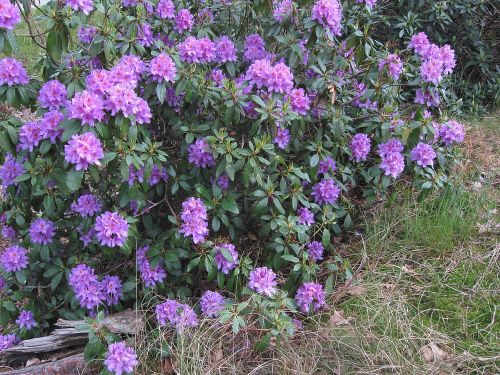 Grayantoxins act as a natural defense for the plant and protect Rhododendron plants from herbivores feeding on their leaves. But why is this toxin present in the flower’s nectar, when normally it should be sweet and good to attract pollinators? It was shown that bumblebee pollinators can best tolerate the toxin, while other insects manifest “madness” reaction and die. The toxin levels in nectar of invasive plants are lower than that of native plants. (Philip Stevenson & Alison Scott-Brown)

Some species of this genus are used in Turkish and Chinese traditional medicine to treat lung, skin, muscle, gastrointestinal and metabolic diseases (Popescu R and Kopp B, 2013; Demir S, Turan I and Aliyazicioglu Y, 2016).

In addition, the flowers and fruits of R. tomentosum and R. molle were used as analgesic, anti-inflammatory, antimicrobial, antiviral, antifungal and insecticidal potential in ancient medicine (Jesionek A and Łuczkiewicz M, 2015; Zhou SZ et al., 2017).

With regard to the plant extracts and isolated compound, in vivo and in vitro studies have indicated that flavonoids are mainly responsible for anti-diabetic, analgesic, anti-inflammatory activities while diterpenes exert toxic, insecticidal, and cytotoxic effects (Popescu R and Kopp B, 2013).

Cytotoxic effects of different Rhododendron species:
• Rhododendron brachycarpum leaf extracts have anticancer activity on human cancer cell lines (A549, AGS, Hep3B, MCF7) in the MTT assays (Byun KS et al., 2005)
• Demir S et al showed in 2016 study that Rhododendron luteum had antiproliferative effects on human colon and liver cancer cells.
• This study aims to determine the antiproliferative and cytotoxic effects of R. ponticum L. extracts collected from Ordu province of Turkey on cancer cell line (F98 glioma) and to quantify the grayanotoxin I and III levels, which are most cytotoxic ones. The study’s conclusion was that Rhododendron ponticum might be predictable as a potential herbal therapeutic agent for incurable glioma amongst commonly central nervous system tumors.

Also known as Deli Bali, Rhododendron honey is indeed a special honey and today it is increasingly popular due to its hallucinogenic effect. It is sought by youth only for this properties, while older people are interested in its sexual stimulant properties.

In some parts of the world, a controlled dosage of the honey can be taken to induce hallucinations for spiritual or psychological purposes. Such areas include northern Turkey and Nepal. (Himalayan Red Honey aka mad, toxic, hallucinogenic honey from Nepal.)

But how to get high without being poisoned in the process, that’s a technique only a Turkish beekeeper can handle. Or, a persistent person who keeps experimenting with different batches of honey and different doses.

Mad honey from Turkey is usually harvested from Anzer Plateau, a pristine region also known for a multifloral honey which carries its name: Anzer honey. Turkey also gives us the most expensive honey in the world: Elvish honey – $5200 /kg.

According to a study conducted by Sibel Silici and published in 2010, Rhododendron honey samples obtained from Black Sea Region of Turkey proves to be a good source of antioxidant and antimicrobial agent that might serve to protect human health.

– Total phenolic content of honeys ranged from 0.24 to 141.83 mg GAE/100 g honey.
– Antioxidant activity of honeys was between 12.76 and 80.80 mg AAE/g honey.
– Radical scavenging activities of the honey samples were varied between 2.30% and 90.73%.
– The honey samples showed highest antibacterial activity against Pseudomonas aeruginosa and Proteus mirabilis.

See all characteristics of rhododendron honey. 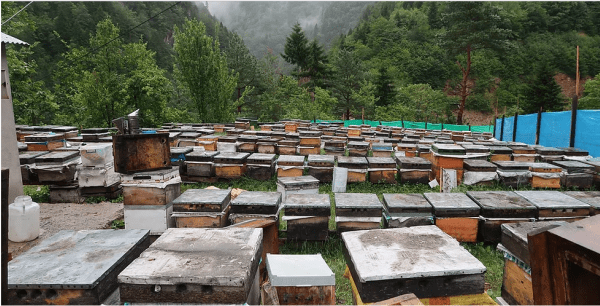 • rubbed on with ‘costum’ it heals sunburn, and with salt it takes away bruises – as reported by Dioscurides (40−90 AD)
• taken in wine is a remedy for indispositions caused by eating fish = says Pliny the Elder (23−79 AD)
• there is nothing better than this honey, mixed with costus, for softening the skin of females, or,
combined with aloes, for the treatment of bruises. – PLINY. Naturalis historia, HG Bohn, 1956.
• healthy men go mad, but epileptics are cured by it immediately – says Pseudo-Aristotle, Aelian (170−235 BC) also mentioned in Geoponica, a collection of ancient writings compiled in the 10th century.

Some of the traditional medical claims have been confirmed by science: the antiepileptic property
mentioned by Pseudo-Aristotle, its antihypertensive effect and its capacity to reduce blood glucose (ÖZTAŞAN N, 2005). In general, it is considered to promote good health (GUNDUZ A, 2009) and to increase life expectancy (DILBER E, 2002)

Ahmet Tekinsoy and his team concluded in a study published in 2017, that “the toxin in mad honey can be used to develop a drug that can be used in patients with tachycardia accompanied by hypertension after passing through all phases of drug development.”

Arthritis. Mad honey is used as a pain reliever and medication against arthritis. ( GUNDUZ A,, 2009; DEMIRCAN A, 2009)

Diabetes mellitus Another use of mad honey concerns its efficacy in lowering the blood glucose, being recommended as a sweetener for patients with diabetes mellitus. (KOCA I, 2007; DEMIRCAN A, 2009; ÖZTAŞAN N, 2005)

Sexual stimulant This property was intensely studied by many scientists, among whom: GUNDUZ A, 2007 and 2012; AKINCI S, 2008; BOSTAN M, 2010; YARLIOGLUES M, 2011; DEMIRCAN A,02009. According to them mad honey can be consumed by both men and women as a sexual stimulant and for enhancing sexual performance. Men have been reported to consume it for self-treatment of sexual dysfunction.

Unfortunately, the doses are not adjusted for each individual, causing more harm than good. A study conducted by Demircan A, in 2009, showed how mad honey therapeutic misadventures may be the cause of cardiac, neurologic or metabolic disorder. 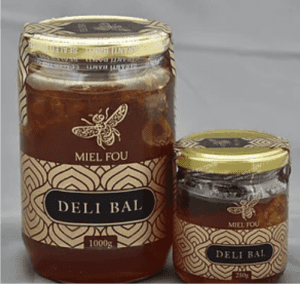 mad honey aka Deli Bal available for sale on miel-fou.com

Reduces pain
• The 2013 study Analgesic effects of mad honey (grayanotoxin) in mice models of acute pain and painful diabetic neuropathy, by A Gunduz and his team from the Karadeniz Technical University, Trabzon, Turkey, investigated the effects of mad honey (grayanotoxin) on pain thresholds in normal mice as model for acute pain, and diabetic mouse as model for neuropathic pain.

The results from this experimental study indicate that GTX exhibits significant analgesic activity and has potential benefits against painful diabetic neuropathy. This is compatible with the widespread use of GTX containing mad honey for alleviating pain.

As for the dose, a quantity of between 1 teaspoonful and 2 table spoonfuls, either neat or diluted in milk, or in the form of sherbets, is usually recommended in traditional Pontus. It depends a lot on the grayanotoxin concentration in honey (H.V. Harissis, G. Mavrofridis, 2013).

Heals fracture faster
In a study conducted by Sahin A and published in 2018, compared the effect of “mad honey” and propolis on fracture healing, using radiological and histopathological analysis. The study showed that grayanotoxin-containing “mad honey” and propolis can accelerate fracture healing. Propolis was more effective than mad honey over both 15- and 30-day treatment periods.

Where can I buy mad honey from?

If you travel to northern Turkey you can find it along side roads. Unfortunately we cannot be sure if that is pure mad honey, or if it is not too toxic to be eaten.
Amazon used to sell mad honey from Turkey, but for some reason it has stopped. We may still have a chance of find rhododendron honey from Italy

. It is rich, full and earthy, with a lingering finish. It is not legal in some countries.

Keep in mind that the rhododendron honey from Italy is not “mad honey”. The density of toxic rhododendron is high enough to produce mad honey only in Turkey and Nepal.

Miel Fou is the number 1 seller of Mad Honey worldwide. They offer certified genuine mad honey with lab-tested grayanotoxin levels for proper dosage, all under strict quality control standards. The honey is raw, not treated in any way that could compromise its health promoting constituents and it’s collected from small beekeepers.
Follow them on instagram @miel.fou They ship worldwide.

Poisoning is dose dependent and differs from person to person. There have also been cases where only some family members displayed symptoms of poisoning, even though all family members had consumed equal quantities of mad honey.
The toxic effect of honey is also dependent on the plant species and season in which the bee is fed.

5 to 30 grams are sufficient for intoxication. (One teaspoonful has 15 g)
Symptoms may begin within a few minutes or after more than 2 hours, depending on the amount
ingested, and may persist from a few hours to a few days.

First aid in case of mad honey poisoning:
As with other cholinergic toxidromes, treatment with intravenous atropine and normal saline infusion, can be life-saving in this poisoning.

How to prevent poisoning
1. Boil it. In the past when the inhabitants of Pontus wanted to consume large amounts of mad honey (instead of regular honey), they used to boil the honey, either alone 5,16,42 or mixed with hazelnuts, branches of fig trees, onion, sour apples, quinces, or milk. (ERGUN K et al. 2005; BODENHEIMER, 1942; YAVUZ H, 1991)

2. Don’t eat it fresh. Storing the mad honey for long periods from 6−12 months up to several (3−5) years was another traditional method known to diminish the risk of poisoning. (ΜΕΛΑΝΟΦΡΥΔΗΣ Π, 1951)

3. Combined consumption of mad honey with onions was believed to be protective against poisoning.

Read more about poisoning, how to avoid it and how to treat it in What is mad honey? Is it dangerous? Where can I find it?

Is there mad honey in the US?

Mad honey was used as a weapon. In 65 BC, King Mithridates VI (king of Pontus and Armenia Minor in northern Anatolia (now Turkey) and his army placed toxic honeycombs filled with mad honey along the roadside in waiting for the invading army of Pompey the Great. The Roman soldiers eat them, got poisoned and were then helplessly slaughtered by the Turkish army.

What is Mad honey from Turkey, aka Deli Bal, and what is it good for? was last modified: September 5th, 2020 by Laura
Laura 03/29/2019
How to boost the immune system fast? Try propolis! How to treat vaginitis naturally. Have you tried propolis?

Leave a Reply to Outpost Sierra