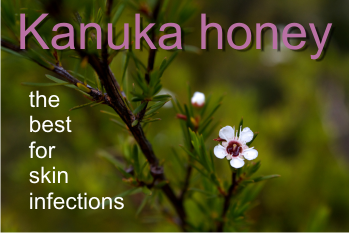 Coming from Kunzea ericoides, also known as white tea-tree or scrub, is a tree that grows only in Australia and New Zealand. Until 1983, Kanuka was considered to belong to genus Leptospermum, like manuka tree. But now we only consider it like its cousin.

The differences are really hard to notice, even some beekeepers fail to recognize them. Their flowers have a similar morphology and pollen differentiation between the two species is very difficult. Apparently the easiest way to tell the difference is to feel the foliage, kanuka leaves are soft, while manuka leaves are prickly. It has a stronger smell when leaves are crushed, the scent being similar to eucalyptus. Tolerant of wind, drought, frost and almost every soil type (it doesn’t like being water-logged), this hardy tree can be harvested for oil or eventually cut down to use as a great firewood.

It is the perfect nursery tree to protect other natives, forming clumps where seedlings can be in shade and gain protection from the elements. Kanuka likes warmer temperatures on a dry, semi-fertile site and isn’t found in South Westland, Fiordland, Southland or Stewart Island.

Kanuka often colonizes land recovering after a fire and is a critical part of the natural recovery of open disturbed ground to forest. With its small but abundant flowers it can colour a whole hillside white, almost giving the appearance of snow cover.

Here are the differences between the 2 trees, as described by Christopher Ward.

Both kanuka and manuka make valuable essential oils, which are extracted using steam distillation from the leaves, to create two very different types of oil. There are also regional variations, which end in chemically different products.

Manufacturers say it is much easier to extract kanuka oil, taking only 40 minutes at most to extract the oil from the plant, while manuka can take up to 6 hours. Kanuka was originally used by maori for pain relief, skin diseases and to help people sleep.

The essential oil has anti-bacterial, anti-fungal and anti-inflammatory properties and was used against internal worms. Kanuka is a strong oil and should be diluted in a carrier oil. It may irritate children’s skin.
It has a pleasant perfume and in aromatherapy it is:

· Useful for muscular pain relief and to relieve swelling
· Useful for sprains, strains, and sports injuries.
· Helps clear inflammation.
· Used to relax the skin.
· Used as a perfume.

In aromatherapy it is used for:

· Antiseptic and for ulcers
· Useful for muscular pain relief
· It is used as a concentrate against athlete’s foot and ringworm
· Used to relax the skin
· Used as a perfume.

In cosmetics it is used:

· As an active ingredient particularly against gram positive bacteria such as Staphylococcus and Streptococcus;
· For its excellent activity against P.acne;
· In soaps, creams, shampoos, “tissue wipes” and antiseptic gels.

Manuka Oil is safe to use and shows almost no skin irritation, and is classified as Non-Hazardous.

According to a recently published work by Crown Research Institute Industrial Research Limited, kanuka honey has double the levels of bug-killing manuka factor. Professor Shaun Holt says “that with the ongoing success of manuka honey, few people were interested in whether there might be even better honeys out there”. Well, it is.

“We have launched what we believe is by far the biggest program of clinical trials on the medical uses of honey in the world, initially looking at eight conditions. Each one is a promising potential pharmaceutical in a billion dollar market. Everyone knows about the problems with antibiotic resistance, the World Health Organization say that it is one of the planet’s biggest health risks, and for skin conditions the evidence suggests that honey may well be an answer.” ( Professor Shaun Holt)

Kanuka honey has been lab tested and is shown to have high levels of methyl glyoxal and total antibacterial activity. In addition, unlike manuka honey, kanuka honey exhibits anti-inflammatory activity, and this makes it potentially a more effective treatment for topical skin diseases.

By now, this honey got no attention, no studies, no clinical studies. But Professor Shaun Holt has ambitious plans to create the next GlaxoSmithKline in HoneyLab, a company he has co-founded to develop pharmaceutical medicines based on kanuka honey. He said that whilst other companies looked at levels of chemicals in honey, his work was focused on whether pharmaceutical honey actually helped people with medical conditions, and the early results were that it is very effective.

“We know that honey can heal wounds and kill just about any bug, so in theory it could be used to treat diseases ranging from eczema to skin infections to lung infections in people with cystic fibrosis”.

The first results of Holt’s research, showed that medical-grade kanuka honey could be a useful treatment for acne and molluscum contagiosum.

In the acne study, 82% reported an improvement within a week and 77% had a reduction in the number of acne lesions. The honey is applied as a facemask for 20-30 minutes twice a day, and washes off easily with warm water.

Compared to popular acne treatments that contained bleach, honey was natural, safer, healed the small wounds caused by acne spots, was likely to reduce scarring and moisturized the skin.
“The leading acne treatment sells around US$2 billion a year – we think that honey is a far superior treatment and plan to demonstrate this in a large independent clinical trial”.

As a conclusion, kanuka honey has even more potential than manuka honey, despite the fact that it wasn’t yet researched. Rosacea is a chronic red rash on the face, particularly on the cheeks and nose. Long-term antibiotics are the standard treatment. However, antibiotics can not only potentially cause side effects, but they also contribute to antibiotic resistance, which the World Health Organization has declared to be a threat to global health security.

On March 31, 2015, HoneyLab published a study on their product Honevo®, a medical-grade kanuka honey formulation, and its efficiency and safe treatment for rosacea. The picture’s link takes you directly to the manufacturer’s page.

The clinical trial was undertaken by the Medical Research Institute of New Zealand and was partly funded by a grant from Callaghan Innovation.
The results were presented at the American Academy of Dermatology meeting in San Francisco by HoneyLab Science Director Dr Shaun Holt:

65% of triallists showed an improvement in their rosacea using Honevo®,
34% had a large improvement and in
13% the disease disappeared completely.
Honevo® was applied as a mask twice a day and then easily washed off. Improvements were seen within two weeks and this had increased when the study ended after eight weeks.

How can a honey heal redness?

“It’s now thought that the underlying causes of rosacea are mites and associated bacteria living deep in the skin in the affected area, and the rosacea symptoms are an inflammatory reaction to these. As medical kanuka honey is effective at killing micro-organisms and reducing inflammation this is an excellent explanation as to why kanuka honey works so well.”

Where can we find kanuka honey? It is sold online. But probably because of the lack of marketing, we will not find it on big sellers like Amazon. But we do find it online in New Zealand shops.
Foe example here, on Blueskin Bay Honey, a family owned company, passionate about its product from the hive to your shelf.

Oils can be found on ManukaOil.com

Read more on the details between kanuka and manuka tree here: http://www.umf.org.nz/Modules/LSDocumentManager/DocumentDownload.aspx?DocumentId=324

Kanuka Honey treats acne and rosacea! What is kanuka honey? was last modified: June 22nd, 2019 by Laura
Laura 05/04/2015
Maharishi Honey seems to be better than Manuka Honey! And is not the only one. Manuka honey – THE BEST to treat wounds, burns, skin infections.