Do bees bite? Yes! And sting, too. Are honey bees aggressive? No. Almost….. 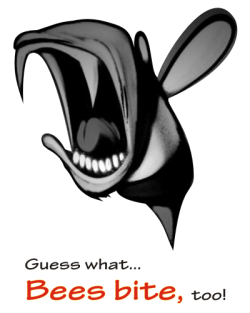 So, yes, bees bite, too. I know you wouldn’t expect that. I didn’t believe it at first. But we cannot argue with scientists, can we?
Yet, don’t worry, they will never bite people. Why? Because they bite only very small animals, that cannot be stung! Like wax moth and the parasitic varroa mite. We don’t fit here…

No, they don’t bite people. Only sting them!

And when they bite, they insert a natural anesthetic that will paralyze the victim, so it can be dragged out of the hive. Can you believe the way nature arranged things? The bees will not kill those tiny little pests, only paralyze them temporarily. They simply do not intend to kill anybody. Neither big animals, stinging them, nor smaller animals, biting them. We have a lot to learn from them.

This anesthetic was studied by scientists, who immediately thought of the production of a natural, low toxicity local anesthetic for humans and animals.

Dr Alexandros Papachristoforou, of the University of Thessaloniki in Greece, conducted a research published on Plos One on October 16, 2012. He says:

“It is amazing that this second line of honeybee defence has gone undetected for so long. Beekeepers will be very surprised by our discovery and it is likely to cause a radical rethink of some long-held beliefs. It will probably stimulate honeybee research in many new directions,” The team of researchers from Greek and French organisations worked in collaboration with Vita (Europe) Ltd, the UK-based honeybee health specialist.

The honey bees act almost like a snake: bite using their mandibles and then secretes a substance we called “2-heptanone (2-H)” into the wound and anesthetize it. The researchers though of 3 reasons for doing so:

It was demonstrated that honey bees mandibles can penetrate the cuticle of wax moth larva, introducing less than one nanolitre of 2-H into their open circulatory system and causing instantaneous anesthetization, that lasts for a few minutes.

2-H acts very similar to lidocaine, as it was observed from its effect of larval response inhibition and recovery. The scientists compared the inhibitory effects of 2-H and lidocaine on voltage-gated sodium channels. Although both compounds blocked the hNav1.6 and hNav1.2 channels, lidocaine was slightly more effective, 2.82 times, on hNav.6.

Using the same method, the scientists showed that 2-H has the fastest inhibitory effect of all alkyl-ketones tested, including the isomers 3- and 4-heptanone. This suggests that natural selection may have favored 2-H over the other similar compounds, because of the associated fitness advantages it confers!

The results revealed a previously unknown role of 2-H in honey bee defensive behavior and due to its minor neurotoxicity, scientists suggested it has a high potential for developing a new local anesthetic from a natural product, which could be used in human and veterinary medicine. If there is somebody who knows if the products have been made, since 2012- the time of publishing the study, please let us know here.

So, if bees have a weapon at each of their both ends, aren’t they the most dangerous insects? Why else will they be so equipped? No, they are peaceful creatures, the prove of this is that they have been relatively tamed and grown in hives in our backyards, by humans. And that they become aggressive only when they feel danger. Why do they get furious?

Let’s look at an incident which happened in France in 2009.

A group of British tourists were attacked by an angry swarm and some of they even got hospitalized. All happened on a Sunday, in an art gallery in an old pigeon loft in Moulidars, near the town of Cognac in the Charente region. The swarm literally invaded the gallery, which was full of tourists at that time.

Similar to a Hitchcock movie, the angry bees attacked everybody. One British woman was stung 500 times and had to be sedated, as dozens of angry bees were plucked from her hair and clothing. Other victims reported a mad dash for their cars, only to find that the stinging frenzy continued inside their vehicles as the insects flew in before there was time to close the doors. Fortunately, there were no deaths. (source: dailymail.co.uk)

Why did the honey bees attacked people?

European honey bee is considered to be a peaceful insect.
Dr Nigel Raine, a bee expert from London University, says that these kinds of episodes are very unusual.

“I’ve never heard of anything like this before. European honey bees are usually mild-tempered.” he said.

Dr Raine’s explanations included:
– it is possible that the tourists inadvertently disturbed a nest in the old building,
– a swarm of bees on the lookout for a new home flew in through an open window and became disoriented,
– bees were affected by Hot and humid conditions (it is known they behave differently depending on the weather conditions). A sunny and warm day calms them.

There are bees more aggressive than others!

European honey bees are peaceful, though as we can see, they can attack people sometimes. But the US Africanized bees are not like that. If you are in Mexic, and hear a swarm of bees passing by, stay still, don’t say a word and wait till they go. But this is another story.

There are movies based on this aggressiveness like The Swarm and Terror Out Of The Sky, which managed to make having a picnic a scaring experience.

Yet, people do not get killed by bees, as we might think. Especially not by the European honey bees.
The truth is that we don’t get killed by animals: lions, sharks or snakes as often as we kill ourselves. There are so many ways of killing, so many that there is no point in even trying to mention some. The point is that animals are probably on the last place.

In fact, there is just the opposite. We are the ones killing animals. Not that we are hunting them down for food, clothes, medicines. We act like their gods. We produce them and eat them. And not only that. We don’t care. Simply don’t care a bit to what happens to them.

Don’t tell me that almost every family has a pet. A dog, a cat, a bird or a fish. These are simply toys for us. We don’t care about animals, generally speaking. I am so angry….