What is cranberry honey? 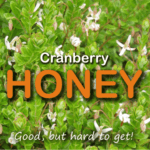 If it’s thanksgiving it’s cranberry sauce! American cranberry. We have dried or frozen berries, juice or sauce. But what is cranberry honey? Cranberries are a group of evergreen dwarf shrubs or trailing vines in the genus Vaccinium. Distribution: throughout the cooler regions of the Northern Hemisphere, including northern Europe, northern Asia and northern North America. Here are the 3 most common known cranberries: 1. In Britain, central and northern Europe, cranberry may refer to the native species Vaccinium oxycoccos, aka small cranberry, bog cranberry, swamp cranberry, particularly in Britain, just cranberry. 2. In the northern United States, Canada… Read More